The Tubulin Code in Mitosis and Cancer
Previous Article in Journal

Coming in the Air: Hypoxia Meets Epigenetics in Pancreatic Cancer

For years, moderate hypothermia (32 °C) has been proposed as an unorthodox therapy for liver injuries, with proven hepatoprotective potential. Yet, limited mechanistic understanding has largely denied its acceptance over conventional pharmaceuticals for hepatoprotection. Today, facing a high prevalence of acetaminophen-induced liver injury (AILI) which accounts for the highest incidence of acute liver failure, hypothermia was evaluated as a potential therapy to combat AILI. For which, transforming growth factor-α transgenic mouse hepatocytes (TAMH) were subjected to concomitant 5 mM acetaminophen toxicity and moderate hypothermic conditioning for 24 h. Thereafter, its impact on mitophagy, mitochondrial biogenesis, glutathione homeostasis and c-Jun N-terminal kinase (JNK) signaling pathways were investigated. In the presence of AILI, hypothermia displayed simultaneous mitophagy and mitochondrial biogenesis to conserve functional mitochondria. Furthermore, antioxidant response was apparent with higher glutathione recycling and repressed JNK activation. These effects were, however, unremarkable with hypothermia alone without liver injury. This may suggest an adaptive response of hypothermia only to the injured sites, rendering it favorable as a potential targeted therapy. In fact, its cytoprotective effects were displayed in other DILI of similar pathology as acetaminophen i.e., valproate- and diclofenac-induced liver injury and this further corroborates the mechanistic findings of hypothermic actions on AILI. View Full-Text
Keywords: drug-induced liver injury; hepatotoxicity; hypothermia; cooling; acetaminophen drug-induced liver injury; hepatotoxicity; hypothermia; cooling; acetaminophen
►▼ Show Figures 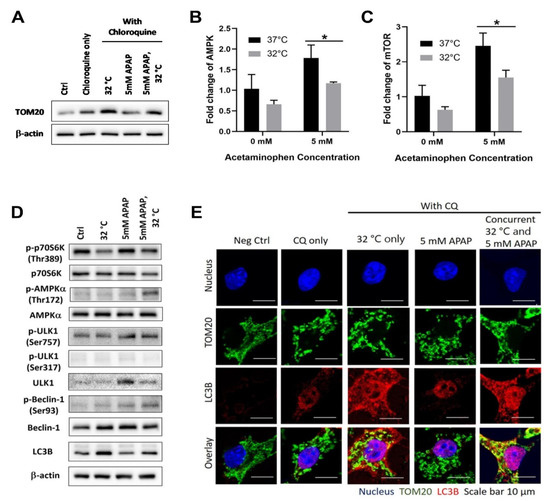