Hyperleukocytosis and Leukostasis in Acute Myeloid Leukemia: Can a Better Understanding of the Underlying Molecular Pathophysiology Lead to Novel Treatments?

Up to 18% of patients with acute myeloid leukemia (AML) present with a white blood cell (WBC) count of greater than 100,000/µL, a condition that is frequently referred to as hyperleukocytosis. Hyperleukocytosis has been associated with an adverse prognosis and a higher incidence of life-threatening complications such as leukostasis, disseminated intravascular coagulation (DIC), and tumor lysis syndrome (TLS). The molecular processes underlying hyperleukocytosis have not been fully elucidated yet. However, the interactions between leukemic blasts and endothelial cells leading to leukostasis and DIC as well as the processes in the bone marrow microenvironment leading to the massive entry of leukemic blasts into the peripheral blood are becoming increasingly understood. Leukemic blasts interact with endothelial cells via cell adhesion molecules such as various members of the selectin family which are upregulated via inflammatory cytokines released by leukemic blasts. Besides their role in the development of leukostasis, cell adhesion molecules have also been implicated in leukemic stem cell survival and chemotherapy resistance and can be therapeutically targeted with specific inhibitors such as plerixafor or GMI-1271 (uproleselan). However, in the absence of approved targeted therapies supportive treatment with the uric acid lowering agents allopurinol and rasburicase as well as aggressive intravenous fluid hydration for the treatment and prophylaxis of TLS, transfusion of blood products for the management of DIC, and cytoreduction with intensive chemotherapy, leukapheresis, or hydroxyurea remain the mainstay of therapy for AML patients with hyperleukocytosis. View Full-Text
Keywords: acute myeloid leukemia; AML; hyperleukocytosis; leukostasis; tumor lysis syndrome; disseminated intravascular coagulation; DIC acute myeloid leukemia; AML; hyperleukocytosis; leukostasis; tumor lysis syndrome; disseminated intravascular coagulation; DIC
►▼ Show Figures 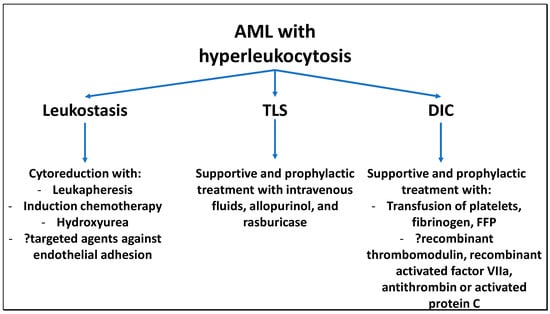 
Bewersdorf JP, Zeidan AM. Hyperleukocytosis and Leukostasis in Acute Myeloid Leukemia: Can a Better Understanding of the Underlying Molecular Pathophysiology Lead to Novel Treatments? Cells. 2020; 9(10):2310.