Molecular and Cellular Mechanisms of Melatonin in Osteosarcoma

Safety profile of nonsteroidal anti-inflammatory drugs (NSAIDs) has been widely studied and both therapeutic and side effects at the gastric and cardiovascular level have been generally associated with the inhibitory effect of isoform 1 (COX-1) and 2 (COX-2) cyclooxygenase enzymes. Now there are evidences of the involvement of multiple cellular pathways in the NSAIDs-mediated-gastrointestinal (GI) damage related to enterocyte redox state. In a previous review we summarized the key role of melatonin (MLT), as an antioxidant, in the inhibition of inflammation pathways mediated by oxidative stress in several diseases, which makes us wonder if MLT could minimize GI NSAIDs side effects. So, the aim of this work is to study the effect of MLT as preventive agent of GI injury caused by NSAIDs. With this objective sodium diclofenac (SD) was administered alone and together with MLT in two experimental models, ex vivo studies in pig intestine, using Franz cells, and in vivo studies in mice where stomach and intestine were studied. The histological evaluation of pig intestine samples showed that SD induced the villi alteration, which was prevented by MLT. In vivo experiments showed that SD altered the mice stomach mucosa and induced tissue damage that was prevented by MLT. The evaluation by quantitative reverse transcription PCR (RT-qPCR) of two biochemical markers, COX-2 and iNOS, showed an increase of both molecules in less injured tissues, suggesting that MLT promotes tissue healing by improving redox state and by increasing iNOS/NO that under non-oxidative condition is responsible for the maintenance of GI-epithelium integrity, increasing blood flow and promoting angiogenesis and that in presence of MLT, COX-2 may be responsible for wound healing in enterocyte. Therefore, we found that MLT may be a preventive agent of GI damages induced by NSAIDs. View Full-Text
Keywords: melatonin; NSAIDs; gastric injuries; antioxidant melatonin; NSAIDs; gastric injuries; antioxidant
►▼ Show Figures 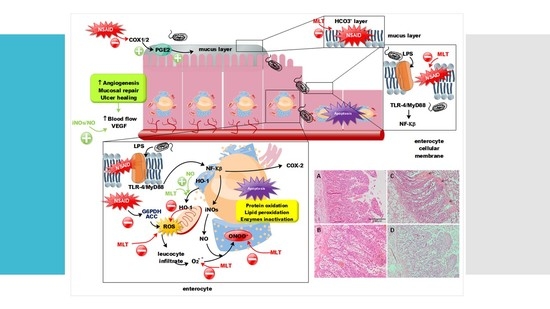