The Zika virus (ZIKV) is a mosquito-borne Flavivirus and can be transmitted through an infected mosquito bite or through human-to-human interaction by sexual activity, blood transfusion, breastfeeding, or perinatal exposure. After the 2015–2016 outbreak in Brazil, a strong link between ZIKV infection and microcephaly emerged. ZIKV specifically targets human neural progenitor cells, suggesting that proteins encoded by ZIKV bind and inactivate host cell proteins, leading to microcephaly. Here, we present a systematic annotation of interactions between human proteins and the seven non-structural ZIKV proteins corresponding to a Brazilian isolate. The interaction network was generated by combining tandem-affinity purification followed by mass spectrometry with yeast two-hybrid screens. We identified 150 human proteins, involved in distinct biological processes, as interactors to ZIKV non-structural proteins. Our interacting network is composed of proteins that have been previously associated with microcephaly in human genetic disorders and/or animal models. Further, we show that the protein inhibitor of activated STAT1 (PIAS1) interacts with NS5 and modulates its stability. This study builds on previously published interacting networks of ZIKV and genes related to autosomal recessive primary microcephaly to generate a catalog of human cellular targets of ZIKV proteins implicated in processes related to microcephaly in humans. Collectively, these data can be used as a resource for future characterization of ZIKV infection biology and help create a basis for the discovery of drugs that may disrupt the interaction and reduce the health damage to the fetus. View Full-Text
Keywords: ZIKV; protein–protein interaction; non-structural viral proteins; network ZIKV; protein–protein interaction; non-structural viral proteins; network
►▼ Show Figures 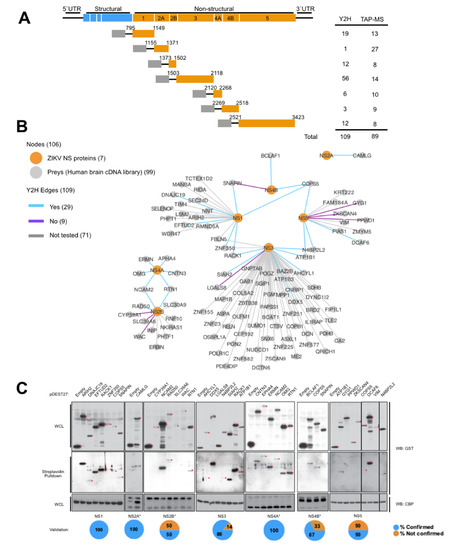