The IL4I1 Enzyme: A New Player in the Immunosuppressive Tumor Microenvironment

Copines make up a family of calcium-dependent, phospholipid-binding proteins found in numerous eukaryotic organisms. Copine proteins consist of two C2 domains at the N-terminus followed by an A domain similar to the von Willebrand A domain found in integrins. We are studying copine protein function in the model organism, Dictyostelium discoideum, which has six copine genes, cpnA-cpnF. Previous research showed that cells lacking the cpnA gene exhibited a cytokinesis defect, a contractile vacuole defect, and developmental defects. To provide insight into the role of CpnA in these cellular processes, we used column chromatography and immunoprecipitation to isolate proteins that bind to CpnA. These proteins were identified by mass spectrometry. One of the proteins identified was actin. Purified CpnA was shown to bind to actin filaments in a calcium-dependent manner in vitro. cpnA− cells exhibited defects in three actin-based processes: chemotaxis, cell polarity, and adhesion. These results suggest that CpnA plays a role in chemotaxis and adhesion and may do so by interacting with actin filaments. View Full-Text
Keywords: copine; actin; calcium; Dictyostelium; cAMP; chemotaxis; adhesion copine; actin; calcium; Dictyostelium; cAMP; chemotaxis; adhesion
►▼ Show Figures 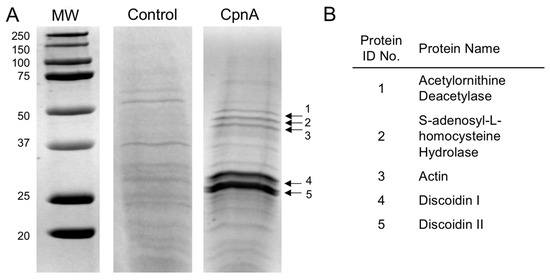