Mitochondrial DNA, a Powerful Tool to Decipher Ancient Human Civilization from Domestication to Music, and to Uncover Historical Murder Cases
Next Article in Special Issue

From Normal to Obesity and Back: The Associations between Mitochondrial DNA Copy Number, Gender, and Body Mass Index
Previous Article in Special Issue

Characterisation of Osteopontin in an In Vitro Model of Embryo Implantation

At the onset of pregnancy, embryo implantation is initiated by interactions between the endometrial epithelium and the outer trophectoderm cells of the blastocyst. Osteopontin (OPN) is expressed in the endometrium and is implicated in attachment and signalling roles at the embryo–epithelium interface. We have characterised OPN in the human endometrial epithelial Ishikawa cell line using three different monoclonal antibodies, revealing at least nine distinct molecular weight forms and a novel secretory pathway localisation in the apical domain induced by cell organisation into a confluent epithelial layer. Mouse blastocysts co-cultured with Ishikawa cell layers served to model embryo apposition, attachment and initial invasion at implantation. Exogenous OPN attenuated initial, weak embryo attachment to Ishikawa cells but did not affect the attainment of stable attachment. Notably, exogenous OPN inhibited embryonic invasion of the underlying cell layer, and this corresponded with altered expression of transcription factors associated with differentiation from trophectoderm (Gata2) to invasive trophoblast giant cells (Hand1). These data demonstrate the complexity of endometrial OPN forms and suggest that OPN regulates embryonic invasion at implantation by signalling to the trophectoderm. View Full-Text
Keywords: Osteopontin; embryo implantation; endometrium Osteopontin; embryo implantation; endometrium
►▼ Show Figures 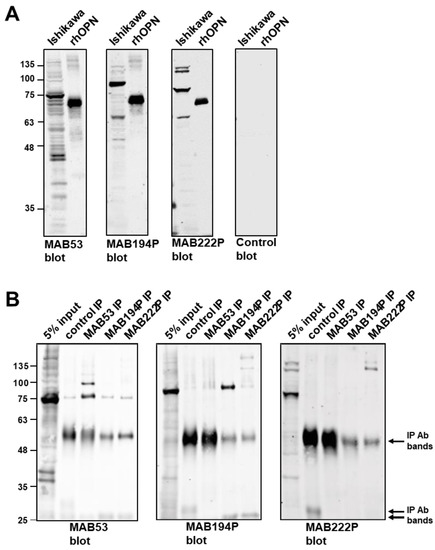