Cancer Biogenesis in Ribosomopathies
Next Article in Special Issue

Viroporins in the Influenza Virus
Previous Article in Journal

Cellular Proteostasis During Influenza A Virus Infection—Friend or Foe?

In mammalian cells, protein homeostasis or proteostasis maintenance is assured through an integrated network that ensures efficient biogenesis, folding and assembling of proteins, as well as the degradation of abnormal conformers. Cells are frequently exposed to external stimuli that can disrupt proteostasis leading to the accumulation of misfolded proteins and, under unmitigated chronic stress conditions, to the formation of potentially pathogenic cytotoxic aggregates [1,2]. To counteract the detrimental effect of aberrant protein accumulation, cells have evolved elaborated protein quality control mechanisms that can adapt to the severity of protein damage, repair disturbances in the proteome and re-establish basal homeostasis [3,4]. Distinct surveillance mechanisms that maintain or re-establish proteostasis have been characterized in the cytoplasm, in the endoplasmic reticulum (ER), and in the mitochondria, including protein refolding mechanisms, degradation pathways, and sequestration. The maintenance of cellular proteome homeostasis is crucial to preserve cellular viability and is essential, among other reasons, to ensure healthy aging and to minimize homeostasis distress caused by extrinsic factors [5,6,7].
As opportunistic infectious agents, viruses employ several strategies to hijack and control cellular activities, including protein production and processing, in order to efficiently replicate. Multiple viruses specifically alter organelle morphology and dynamics as part of their replication cycle [8,9], as well as lead to the accumulation of misfolded aggregation-prone proteins, which can be toxic to the cell [10,11,12]. Viruses induce the formation of specialized nuclear or cytoplasmic microenvironments, involving an extensive rearrangement of the cellular cytoskeleton and membrane compartments. These virus-induced compartments, generally termed virus factories, are important not only to recruit and concentrate viral and host components and facilitate the molecular interactions required for essential steps of the viral life cycle, but also to control the cellular antiviral defense [13,14,15]. On the other hand, it is often considered that these inclusion bodies may be part of the host antiviral response to infection [11,16].
In this review, we summarize and discuss the induced disruption of the cellular machinery, with focus on proteostasis imbalance, throughout the course of influenza A virus (IAV) life-cycle and explore its significance for infection efficiency. Although information on the interplay between influenza B virus (IBV) and host-cell proteostasis is scarce, we have established a parallel, where appropriate, between the two viruses.

3. Protein Quality Control Mechanisms and Their Interplay with Influenza A Virus

3.2. The Endoplasmic Reticulum and the Unfolded Protein Response

In eukaryotic cells, the ER is the major site for protein folding and trafficking. Therefore, ER proteostasis perturbations, including those caused by viral infection, may lead to accumulation of misfolded proteins and their aggregation within the organellar lumen, which induces stress in the ER [113]. Its ability to facilitate protein folding renders ER chaperones as essential and the major facilitators of proper virus assemblage. For IAV, the folding and maturation efficiency of viral glycoproteins in the ER, namely HA and NA, impact the production of viral particles [114]. Concretely, the binding of ER calnexin and calreticulin facilitates the IAV HA productive folding [115].
Once a threshold of misfolded protein accumulation in the ER has been reached, it activates the unfolded protein response (UPR) (reviewed in [116]). As an immediate response, general protein translation is attenuated through the activation of PKR-like ER kinase (PERK) to decrease the load of newly synthesized proteins into ER. Simultaneously, the activation of inositol-requiring enzyme 1 (IRE1) leads to the preferential degradation of mRNA encoding for ER-localized proteins via IRE1-dependent decay (RIDD), and to an unconventional splicing of the transcription factor X box-binding protein 1 (XBP1) mRNA that controls the expression of UPR-related genes. Lastly, the activation of activating transcription factor 6 (ATF6) pathway also contributes to the synthesis of stress-attenuating proteins, as chaperones and folding catalysts. In addition, the ER-associated protein degradation (ERAD) may also be activated, which allows the clearance of misfolded and accumulated proteins in the ER, and, if these steps fail, the UPR might ultimately lead to apoptosis.
Upon infection, the UPR might either be mobilized by the host in an attempt to restrict viral propagation or be manipulated by the virus to benefit its replication. For instance, the innate sensing of viruses by ER stress was found to be responsible for the pathogenicity of pandemic IAV [117]. On the other hand, the ER-sensing of viral glycoproteins, namely the viral HA protein, which mediates the attachment of the viral particle to the host cell and escape from the endosome, triggers an antiviral immunity response that inhibits IAV replication, resulting in the rapid proteasomal-degradation of this protein mediated by the ERAD pathway [118].
The role of the UPR during IAV infection is unclear, since the results on the subject are somewhat controversial. Hassan et al. [119] reported that IAV induces ER stress responses through IRE1, with little or no concomitant activation of the PERK and the ATF6 pathway, and further showed that IAV causes a significant induction of several ER-stress response-related genes, including CHOP and GADD34. Inversely, Roberson et al. [120] demonstrated that IAV can induce ER-stress via ATF6 activation, but not CHOP. Yet, chemical genomics identified PERK as a cellular target for influenza virus inhibition, as, according to the authors [121], IAV can lead to the attenuation of PERK-mediated UPR, but does not distress neither ATF6 or IRE1 arms, in contrast to Hassan and Roberson’s results [119,120]. It is important to consider though that the approaches used by the groups are distinct and further analysis are needed in order to fully understand the response mediated by the UPR in the course of IAV infection (Figure 4).

Upon IAV infection, several processes within the cytosolic and the ER protein quality control mechanisms, namely protein folding, degradation and sequestration, have shown to contribute either as part of an effective replication cycle or as part of an effective cellular antiviral response to the virus. IAV seems to take advantage of the protein quality control components to replicate and spread infection, although some of the observed effects may also be part of the establishment of cellular reactions to counteract the virus. Some reports show contradictory findings and further studies are needed in order to obtain more clarity and insight into the control of cellular proteostasis mechanisms by both the virus and the host cell. 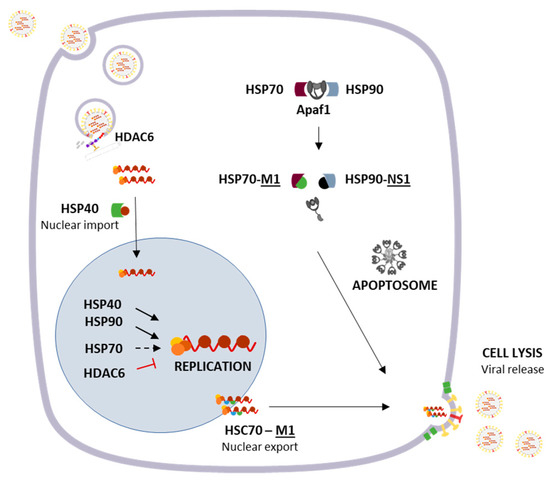 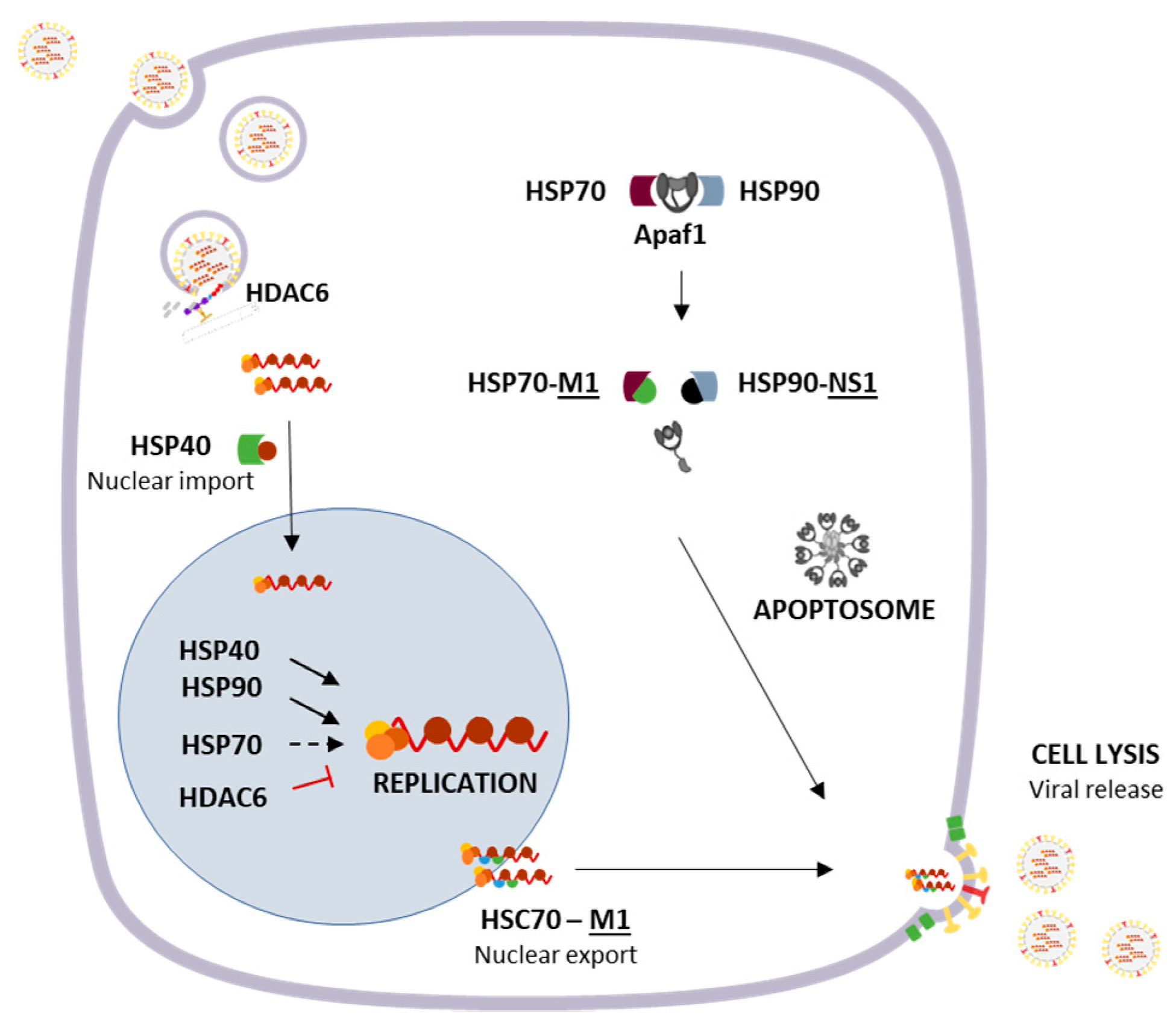