MicroRNAs and Osteoarthritis
Next Article in Special Issue

Mitochondria play an important role in molecular mechanisms of adaptive changes occurring in cells of various brain structures in response to altered physiological conditions or development of pathologies [1]. These intracellular organelles are a crucial target for various neurotoxins, causing symptoms of Parkinson’s disease [1,2,3]. In the context of experimental Parkinsonism induced by administration of 1-methyl-4-phenyl-1,2,3,6-tetrahydropyridine (MPTP) mitochondria are the principle organelles, where the key events in the development of this neurodegenerative disorder occur. Being a protoxin, MPTP undergoes bioactivation by monoamine oxidase B (MAO B), the enzyme of the outer mitochondrial membrane; the resultant neurotoxin MPP+ (1-methyl-4-phenylpyridinium) inhibits complex I of the mitochondrial respiratory chain, thus promoting the development of mitochondrial dysfunction and movement disorders typical of Parkinson’s disease [3,4,5]. Administration of MAO B inhibitors (e.g., deprenyl or isatin [6,7]) or substrates competing for the active site of this enzyme (e.g., phenylethylamine) [8] prevented not only metabolic activation of MPTP, but also deficiency of the neurotransmitter dopamine, and locomotor impairments typical of this disease.
Good evidence exists in the literature that neuroprotector mechanisms of certain anti-Parkisonian agents, inhibitors of monoamine oxidase (MAO), may be associated with their effects on the ubiquitin-proteasomal system (UPS) [9] responsible for selective proteolytic degradation of proteins from various intracellular compartments including mitochondria. Mitochondrial dysfunction induced by MPTP has a significant impact on the functioning of the ubiquitin-proteasome system (UPS) [10,11].
Ubiquitin, a 76-residue protein, is widely distributed in all eukaryotic cells, and targets proteins for subsequent degradation [12,13,14]. The ubiquitination process includes several sequential stages, which involve ubiquitin-activating enzyme (E1), ubiquitin-conjugating enzyme (E2), and ubiquitin ligase (E3) [12,13,14]. The major function of ubiquitin consists of (poly)ubiquitination of proteins for their subsequent proteasomal degradation. In this context, the 19S proteasome subunits play a role in the ubiquitin receptor [15], which is responsible for the delivery of client proteins to the 20S proteasome, where subsequent proteolytic degradation occurs [16].
Recently, we have demonstrated that one of the 19S proteasome subunits, Rpn10, binds a wide range of mouse proteins associated with brain mitochondria [17]; and it demonstrated high affinity to both ubiquitinated and to non-ubiquitinated proteins [18]. The development of MPTP-induced movement impairments typical of experimental Parkinsonism in mice were accompanied by changes in the repertoire of Rpn10-binding proteins [17]. Pretreatment of mice with isatin significantly attenuated the manifestation of movement impairments, and decreased the repertoire of mitochondrial Rpn10-binding proteins [17]. However, the ubiquitination status of these proteins was not evaluated.
In this work, we have studied the profile of the mouse brain mitochondrial proteins carrying the ubiquitin signature and the possible contribution of cytosolic and mitochondrial ubiquitin conjugation machineries to the ubiquitination of mitochondrial proteins. We have also investigated the effect of the neurotoxin MPTP and the neuroprotector isatin on the profile of ubiquitinated proteins of the mouse brain mitochondrial fraction. The results of this study indicate that the development of MPTP-induced Parkinsonism had a significant impact on the profile of ubiquitinated brain mitochondrial proteins. Administration of the neuroprotector isatin either alone or before MPTP significantly altered the profile of ubiquitinated brain mitochondrial proteins.

Thirty two male C57BL/6 mice (20–25 g; n = 8 in each group), obtained from the Stolbovaya nursery (Moscow region), were used in this study. Experiments were performed one week after their arrival from the nursery. Animals were maintained at natural illumination and received a standard laboratory chow and water ad libitum. MPTP was injected intraperitoneally (i.p., 30 mg/kg). Isatin (100 mg/kg, i.p.) was injected 30 min before MPTP. Control mice were treated with intraperitoneal injection of saline (0.1 mL/kg). Behavioral changes induced by MPTP or isatin were analyzed 90 min after the last administration by means of the open field test [19]. The exploratory reaction of mice in the open field test was defined as a sum of horizontal activity (units) and vertical activity (units). All procedures were approved by local authorities for animal research.

2.3. Isolation of Mitochondrial Fraction and Sample Preparation for Mass Spectrometry

The animals were decapitated within 30 min after behavioral testing. All subsequent procedures were carried out at 4 °C. The brains, washed in ice-cold saline, were immediately dissected and homogenized in the isolation medium containing 0.32 M sucrose, 1 mM EDTA, 10 mM Tris-HCl buffer, pH 7.5, using an Ultra-Turrax T 10 homogenizer (IKA-Werke, Staufen Germany) at a low speed, to obtain 10% homogenate (w/v).
Isolation of the brain mitochondrial fraction was carried out as described previously [20]. Briefly, 10% homogenate was initially centrifuged at 1000× g for 10 min to remove sediment cell debris and nuclei. The resultant supernatant was further centrifuged at 10,000× g for 20 min to isolate the crude mitochondrial fraction, which was not subjected to additional purification procedures.
The mitochondrial pellets obtained at the previous stage were resuspended in 200 µL in the lyzing solution, containing 0.05 M potassium-phosphate buffer, pH 7.4, and 3% Triton X-100. After incubation for 60 min at 4 °C, the mitochondrial preparations were diluted three times with the same buffer but without Triton X-100 to obtain the final concentration of the detergent of 1%. Samples were centrifuged at 19,500× g for 20 min, and supernatants were used for subsequent proteomic analysis [21].
In a pilot experiment, the lysates were incubated with the deubiquitinating enzyme inhibitor degrasyn (WP-1130) for the evaluation of a possible effect of endogenous deubiquitinases on ubiquitinated proteins.

High resolution mass spectrometry analysis was performed using an Orbitrap Fusion (Thermo Scientific, Rockford, IL, USA) with the installed ESI-NSI ion source. The instrument was operated in positive ionization mode with emitter voltage adjusted to 2.2 kV and drying gas temperature at 280 °C. Surveyed in a range of 400 m/z–1200 m/z precursor ions (maximum integration time was 80 ms) with charge states from z = 2+ to z = 6+ were isolated in the quadrupole mass analyzer within ±1.5 m/z, and triggered to fragmentation in the m/z range with a fixed lower mass (110 m/z) and a dynamic upper mass (depending on the charge state of the fragmented precursor) limited to 2100 m/z. Fragmentation and tandem scanning were performed in a MS3 synchronous precursor ions selection conditioned by mass difference between the fragment ions of either ΔM = 114.0429 u (corresponding to the ubiquitin tag GG) or ΔM = 383.2281 u (corresponding to the ubiquitin tag LRGG), both detected with an asymmetric mass tolerance of −3 ppm/+7 ppm. Only two (N = 2) ions were allowed for synchronous selection in the MS3 mode, provided that the mass difference between ions in pair was registered.
Liquid chromatography separation was accomplished on an Ultimate 3000 RSLCnano (Thermo Scientific, Rockford, IL, USA). Samples were loaded onto an enrichment Acclaim µ-Precolumn (0.5 mm × 3 mm, 5 µm) (Thermo Scientific, Rockford, IL, USA) at a flow rate of 15 µL/min for 3.5 minutes in 2% acetonitrile, supplied by 0.1% formic acid and 0.03% acetic acid. Analytical separation was carried out at a flow rate 0.3 µL/min using an Acclaim Pepmap® C18 (75 µm × 150 mm, 2 µm) (Thermo Scientific, USA) column in a gradient of mobile phase A (water with 0.1% formic acid and 0.03% acetic acid) and mobile phase B (acetonitrile with 0.1% formic acid and 0.03% acetic acid) in the following gradient: 2%–37% of mobile phase B for 45 min, followed by column washing in 90% of mobile phase B for 8 min, with equilibration of the column under initial gradient conditions (2% of mobile phase B) for 15 min before starting the next run.
Every mass spectrometry experiment was performed using pooled brain mitochondrial fractions isolated from two mice. For each group of animals, four independent experiments were carried out.

Raw data files were converted in MGF-files using MSConvert (Proteowizard, Palo Alto, CA, USA). Peak lists obtained from converted spectra were identified using X!Tandem Vengeance, version (2015.12.15.2). The search was conducted using SearchGUI, version 3.3.0 [22,23].
Protein identification was conducted against a concatenated target/decoy version of the Mus musculus (16,915 > 99.9%) complement of the UniProtKB fasta file (release February 2018). The decoy sequences were created by reversing the target sequences in SearchGUI. The identification settings were as follows: trypsin (specific), with a maximum of three missed cleavages within ±5.0 ppm tolerance at MS1 level, and ±0.03 Da tolerance for MS2 tolerances. The following variable modifications were set: carbamidomethylation of C (+57.021464 Da), oxidation of M (+15.994915 Da), ubiquitination of K as GG-tag (+114.042927 Da), and long ubiquitination tag of K (+383.228102 Da). Variable modifications refined after the search procedure. Peptides and proteins were inferred from the spectrum identification results using PeptideShaker version 1.16 (Compomics, Gent, Belgium). Peptide spectrum matches (PSMs), peptides, and proteins were validated at a 1.0% false discovery rate (FDR) estimated using the decoy hit distribution.
Proteins were classified by their cellular localization, molecular functions, and biological process involvement in terms of Gene Ontology (GO) annotations using STRAP software (version 1.5.0.0) [24].
Each protein listed in the Tables and the Supplementary Materials was identified at least in three independent experiments, each of which employed independent brain mitochondrial samples, as well as their chromatographic and proteomic processing. 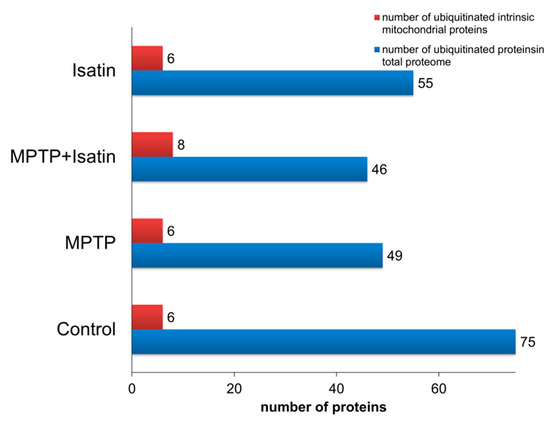 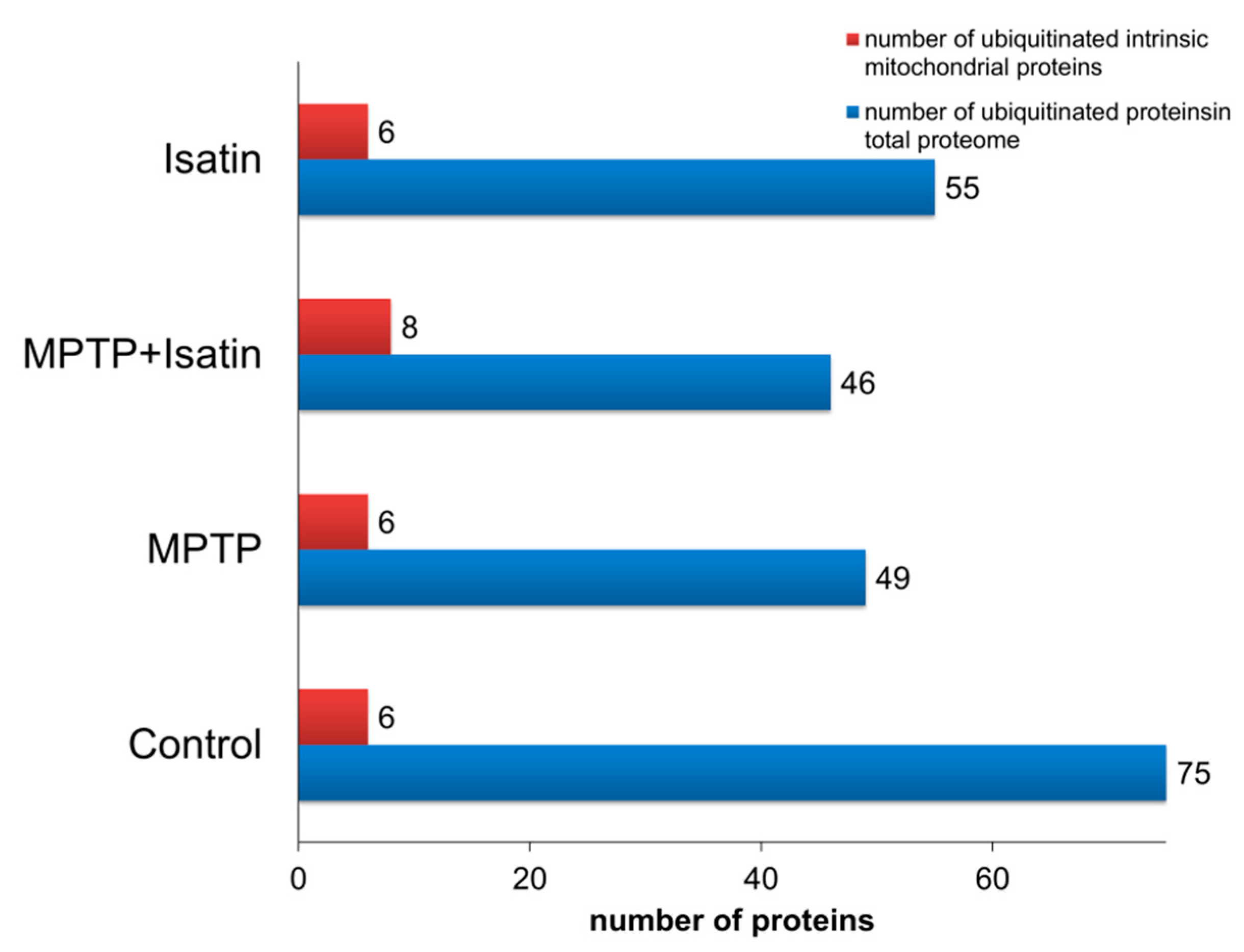 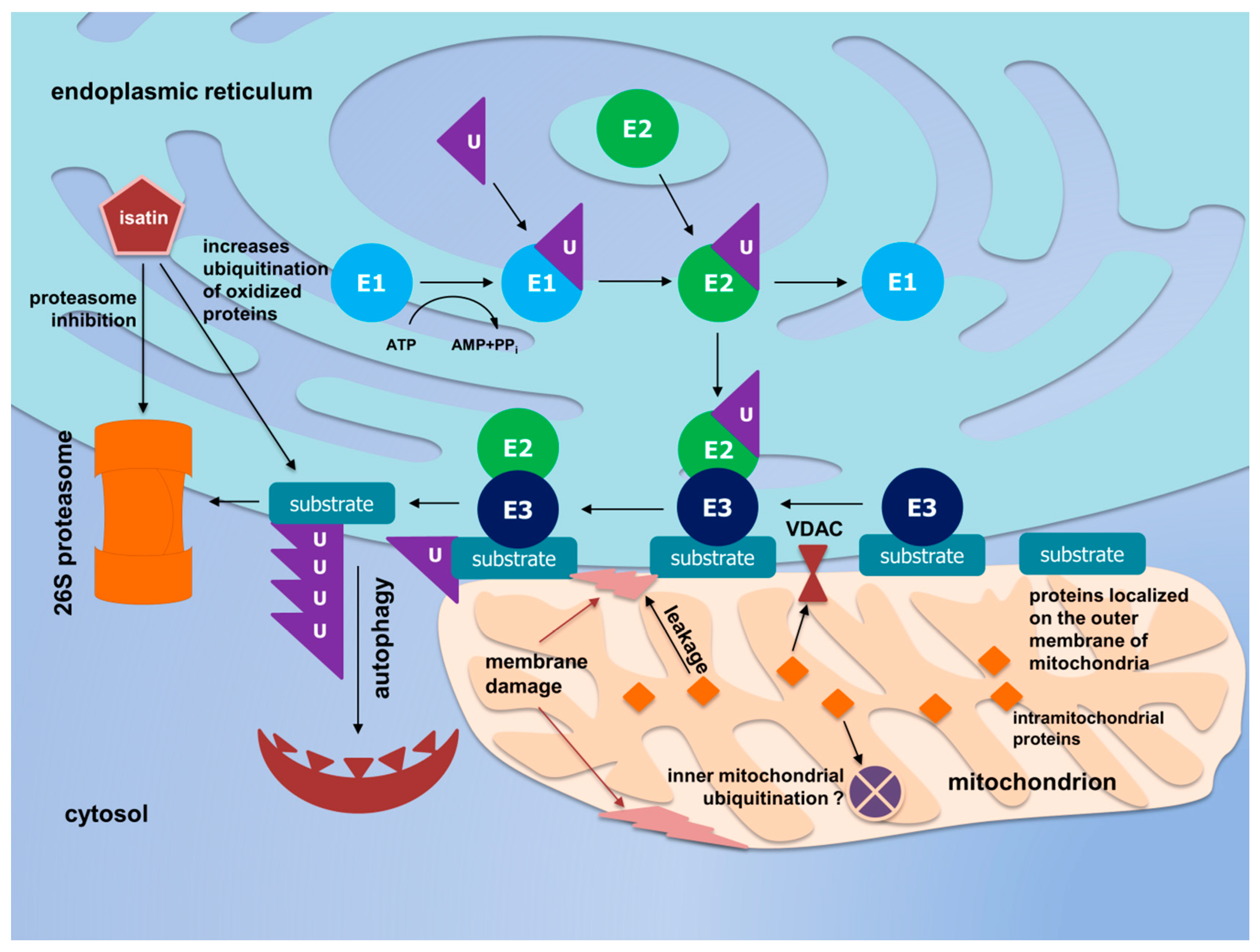