Epigenetic Erosion in Adult Stem Cells: Drivers and Passengers of Aging
Next Article in Special Issue

Heparanase (HPSE) has been defined as a multitasking protein that exhibits a peculiar enzymatic activity towards HS chains but which simultaneously performs other non-enzymatic functions. Through its enzymatic activity, HPSE catalyzes the cutting of the side chains of heparan sulfate (HS) proteoglycans, thus contributing to the remodeling of the extracellular matrix and of the basal membranes. Furthermore, thanks to this activity, HPSE also promotes the release and diffusion of various HS-linked molecules like growth factors, cytokines and enzymes. In addition to being an enzyme, HPSE has been shown to possess the ability to trigger different signaling pathways by interacting with transmembrane proteins. In normal tissue and in physiological conditions, HPSE exhibits only low levels of expression restricted only to keratinocytes, trophoblast, platelets and mast cells and leukocytes. On the contrary, in pathological conditions, such as in tumor progression and metastasis, inflammation and fibrosis, it is overexpressed. With this brief review, we intend to provide an update on the current knowledge about the different role of HPSE protein exerted by its enzymatic and non-enzymatic activity. View Full-Text
Keywords: heparanase; extracellular matrix (ECM) heparanase; extracellular matrix (ECM)
►▼ Show Figures 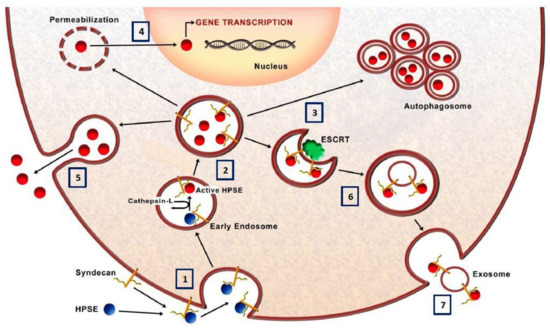