Water supply is essential for maintaining normal physiological function during the rapid growth of bamboo. Aquaporins (AQPs) play crucial roles in water transport for plant growth and development. Although 26 PeAQPs in bamboo have been reported, the aquaporin-led mechanism of maintaining diurnal water balance in bamboo shoots remains unclear. In this study, a total of 63 PeAQPs were identified, based on the updated genome of moso bamboo (Phyllostachys edulis), including 22 PePIPs, 20 PeTIPs, 17 PeNIPs, and 4 PeSIPs. All of the PeAQPs were differently expressed in 26 different tissues of moso bamboo, based on RNA sequencing (RNA-seq) data. The root pressure in shoots showed circadian rhythm changes, with positive values at night and negative values in the daytime. The quantitative real-time PCR (qRT-PCR) result showed that 25 PeAQPs were detected in the base part of the shoots, and most of them demonstrated diurnal rhythm changes. The expression levels of some PeAQPs were significantly correlated with the root pressure. Of the 86 sugar transport genes, 33 had positive co-expression relationships with 27 PeAQPs. Two root pressure-correlated PeAQPs, PeTIP4;1 and PeTIP4;2, were confirmed to be highly expressed in the parenchyma and epidermal cells of bamboo culm, and in the epidermis, pith, and primary xylem of bamboo roots by in situ hybridization. The authors’ findings provide new insights and a possible aquaporin-led mechanism for bamboo fast growth. View Full-Text
Keywords: aquaporins; AQPs; bamboo; root pressure; fast growth aquaporins; AQPs; bamboo; root pressure; fast growth
►▼ Show Figures 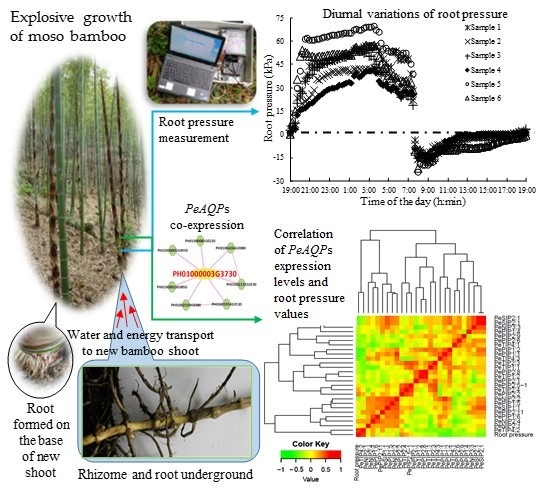