:
Quinoline core has been shown to possess a promising role in the development of anticancer agents. However, the correlation between its broad spectrum of bioactivity and the underlying mechanism of actions is poorly understood. The present study, with the use of bioinformatics approaches, reported a series of designed molecules which integrated quinoline core and sulfonyl moiety, with the objective of evaluating the substituent and linker effects on anticancer activities and associated mechanistic targets. We identified potent compounds (1h, 2h, 5 and 8) exhibiting significant anticancer effects towards liver cancer cells (Hep3B) with the 3-(4,5-dimethylthiazol-2-yl)-5-(3-carboxymethoxyphenyl)-2-(4-sulfophenyl)-2H-tetrazolium (MTS) relative values of cytotoxicity below 0.40, a value in the range of doxorubicin positive control with the value of 0.12. Bulky substituents and the presence of bromine atom, as well as the presence of sulfonamide linkage, are likely the favorable structural components for molecules exerting a strong anticancer effect. To the best of our knowledge, our findings obtained from chemical synthesis, in vitro cytotoxicity, bioinformatics-based molecular docking analysis (similarity ensemble approach, SEA),and electrophoretic mobility shift assay provided the first evidence in correlation to the anticancer activities of the selected compound 5 with the modulation on the binding of transcription factor NF-κB to its target DNA. Accordingly, compound 5 represented a lead structure for the development of quinoline-based NF-κB inhibitors and this work added novel information on the understanding of the mechanism of action for bioactive sulfonyl-containing quinoline compounds against hepatocellular carcinoma.
Keywords:
NF-κB; anticancer; hepatocellular carcinoma; quinolines

Cancer is one of the most life threatening diseases worldwide [1]. Thus, continuous development of effective anticancer drugs with the emergence of drug resistance to existing anticancer agents remains a big challenge [2]. Research work for isolating and modifying natural alkaloids from plants and microorganisms can help scientists probe for more biological active leads [3,4,5]. Natural alkaloids, such as derivatives of quinolines, are classes of nitrogen-containing heterocycles, are one of the widest classes of natural products and originate from either natural or artificially synthesized sources [6]. Some quinoline compounds and their derivatives are available as drugs nowadays [7]; examples include (but are not limited to) antimalarial (e.g., quinine, quinidine, chloroquine), antiviral (e.g., saquinavir), antibacterial (e.g., ciprofloxacin, sparfoxacin and gatifloxacin), antifungal and antiprotozoal (e.g., clioquinol), and anticancer (e.g., camptothecin, irinotecan and cabozantinib). Quinoline scaffold has been recognized as an important source of anticancer drugs as they showed different effects on cancer biological functions, such as growth inhibition associated with cell cycle arrest, apoptosis, inhibition of angiogenesis, arrest of cell migration, and modulation of nuclear receptor responsiveness [7]. More recently, Hu et al. [8] reported a tetraisohydroquinoline-based compound which could enhance the antitumor efficiency in human cancer cell lines. Therefore, there is a continuous research need to isolate and modify naturalalkaloids as biological active leads [7,9,10]. In particular, tropical plants, such as Galipea officinalis and Galipea longiflora, are naturally occurring sources of several important tetrahydroquinoline and quinoline alkaloids [11]. Extensive studies, including our reported work, demonstrated that quinoline derivatives have a wide range of biological activities [12] leading, for instance, to anticancer [13], antimicrobial [14], and anti-inflammatory effects [15].
Hepatocellular carcinoma (HCC) is one of the leading causes of cancer-related death worldwide; the survival rate remains low (about 20%), even after the introduction of physical treatments, such as liver transplant surgery and radiation and chemotherapy [16,17]. However, drugs with optimal efficacy for HCC are still limited, and it has been suggested that the targeted regulation involving the inhibition on cell migration and epithelia-mesenchymal transition (EMT) processes might be the new directions for cancer treatment [18]. Thus, development of novel small-molecule drugs with better potency and limited side effects could help improve survival rate of patients with HCC.
In the present study, we reported a series of designed molecules that integrated quinoline core and sulfonyl moiety, with the objective of evaluating the substituent and linker effects on anticancer activities in HCC cells and the associated putative mechanistic target, the transcription factor NF-κB, with bioinformatic, and molecular analysis. The overall findings provided the first evidence about the lead structure for the potential development of quinoline-based NF-κB inhibitor.

All reagents and chemicals were purchased from commercial sources. The synthesized compounds were characterized by melting point, mass spectrometry, 1H-, and 13C-NMR. 1H- and 13C-NMR spectra were recorded on a Brucker DPX 400 spectrometer (Bruker, Switzerland) in CDCl3 unless otherwise specified.

To get a solution of 8-hydroxyquinoline or 8-hydroxyquinaldine (0.69 mmol, 1.1 equiv) in water (2 mL), substituted benzenesulfonyl chloride (0.62 mmol, 1.0 equiv) and potassium hydroxide (0.69 mmol, 1.1 equiv) were added and stirred at room temperature. The reaction progress was monitored by thin layer chromatography. After the reaction completed, the aqueous phase was extracted with dichloromethane and dried over anhydrous sodium sulfate. Solvent was removed by rotary evaporator (Heidolph, Schwabach, Germany) and the crude product was purified by silica gel column chromatography.

3.1.3. General Procedure for the Synthesis of 5

3.1.4. General Procedure for the Synthesis of 8

Compound 8 was prepared from the reactant, 5,7-dibromo-8-hydroxyquinoline, using the method previously reported by our group [14]. The preparation followed the protocol stated in the study, unless otherwise specified.

3.1.5. General Procedure for the Synthesis of 7

Compound 7 was prepared by the oxidation of compound 6 using selenium dioxide under reflux in 1,4-dioxane, where the method was previously reported by our group [51].The preparation followed the protocol stated in the study, unless otherwise specified.
The characterization of the synthesized compounds is described in the supplementary information.

The anticancer activity of synthesized compounds was evaluated against three cancer cell lines, namely Hep3B, SLMT-1, and MCF-7, by standard MTS assay as we reported before [53]. Cells were seeded in 96 well microtiter plates with a cell density of 5000 for 24 h for anticancer activity screening. Doxorubicin (Dox) and dimethylsulfoxide (DMSO, molecular biology grade) were used as positive control and a vehicle control, respectively. Synthesized compounds were added at the desired concentration and incubated for further 48 h. The relative cell viability in each well was determined by using MTS assay. Each treatment point was repeated in three technical and independent replicates.

Electrophoretic mobility shift assays were performed by using as target DNA double-stranded 32P-labeled oligonucleotides mimicking an NF-κB binding site. Binding reactions were set up as described elsewhere in binding buffer (5% glycerol, 20 mM Tris-HCl pH 7.5, 1 mM DTT, 0.01% TRITON X-100, 50 mM KCl, 0.2 mM EDTA, 0.05 µg/µL dIdC and 1 mM MgCl2) and labeled oligonucleotides were incubated in the presence of compound 5 at different concentrations. The effects of DMSO on NF-κB/DNA interactions were analyzed at relevant concentrations, demonstrating no inhibitory effects. After 20 min of binding of compound 5 (resuspended in DMSO) at room temperature to NF-κB-p50 (Active Motif, cat.31101), incubation with the 32P-labeled NF-κB oligonucleotides was performed in a total final volume of 20 μL for additional 20 min, at room temperature. Then, the samples were electrophoresed at constant voltage (200V for 30 min) through low ionic strength buffer (0.25×)Tris/borate/EDTA buffer (22.5 mM Tris, 22.5 mM boric acid, 0.5 mM EDTA, pH 8) on 6% polyacrylamide gels until tracking dye (bromophenol blue) reached the end of a 16 cm slab. Gels were dried and exposed for autoradiography with intensifying screens at −80 °C. In these experiments, DNA/protein complexes migrate through the gel with slower efficiency. The nucleotide sequences of double-stranded target DNA utilized in these experiments were 5′-ATC GGG GGA AAT CCC AGA AC-3′ (sense strand, NF-κB). The synthetic oligonucleotides used in this study were purchased from IDT (Integrated DNA Technologies, Leuven, Belgium).Control NF-κB inhibitors were trimethylangelicin (TMA) and β-1-O-galloyl-3,6-(R)-hexahydroxydiphenoyl-d-glucose (corilagin). Synthesis of TMA has been reported elsewhere [25,26,27]; corilagin was obtained from the China National Institute for the Control of Pharmaceutical and Biological Products. For quantitative analyses, the autoradiographs were scanned through a Gel-Doc Instrument (Biorad, Hercules, CA, USA) using the QuantityOne software (Version 4, Biorad, Hercules, CA, USA).

The supplementary materials are available.

P.Y.C. and Y.Z. were the PhD students who contributed to the arrangement of all experiments, analysis of results and writing-up of the paper. R.G. group: J.G., A.F., A.C. and G.M. were responsible for the overall planning, docking analyses and EMSA experiments. Z.B., C.H.C. and P.L.L. gave directional advices related to the molecular docking and EMSA analyses. W.Y.W., W.M.K., A.S.-c.C. and X.L. gave advices to the parts of chemical synthesis. A.K.-y.L., J.Y.W.M. and X.W. contributed to the in vitro cytotoxicity assays and analysis of results. K.H.L. worked closely with J.C.O.T. to initiate and supervise the present work.

This work was supported by the Innovation Technology Commission (Hong Kong) to ABCT, HKPU and the State Key Laboratory of Chirosciences (1-BBX8). R Gambari is supported by AIRC (IG-13575) and by CIB (Interuniversity Consortium of Biotechnologies, Italy). Lastly, J.C.T. would like to acknowledge the Lo Ka Chung Foundation Fund (a/c: ZE20 and 954P) and the MOU signed with the Hong Kong Baptist University, Hong Kong and Griffith University, Australia. 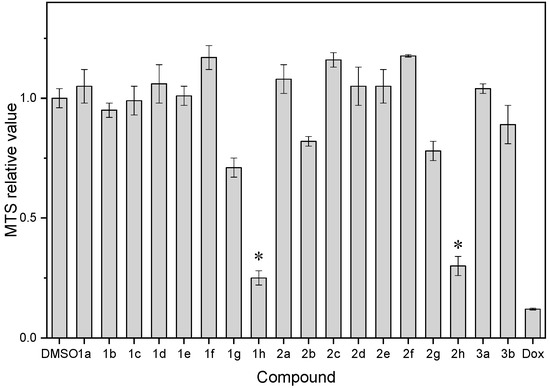 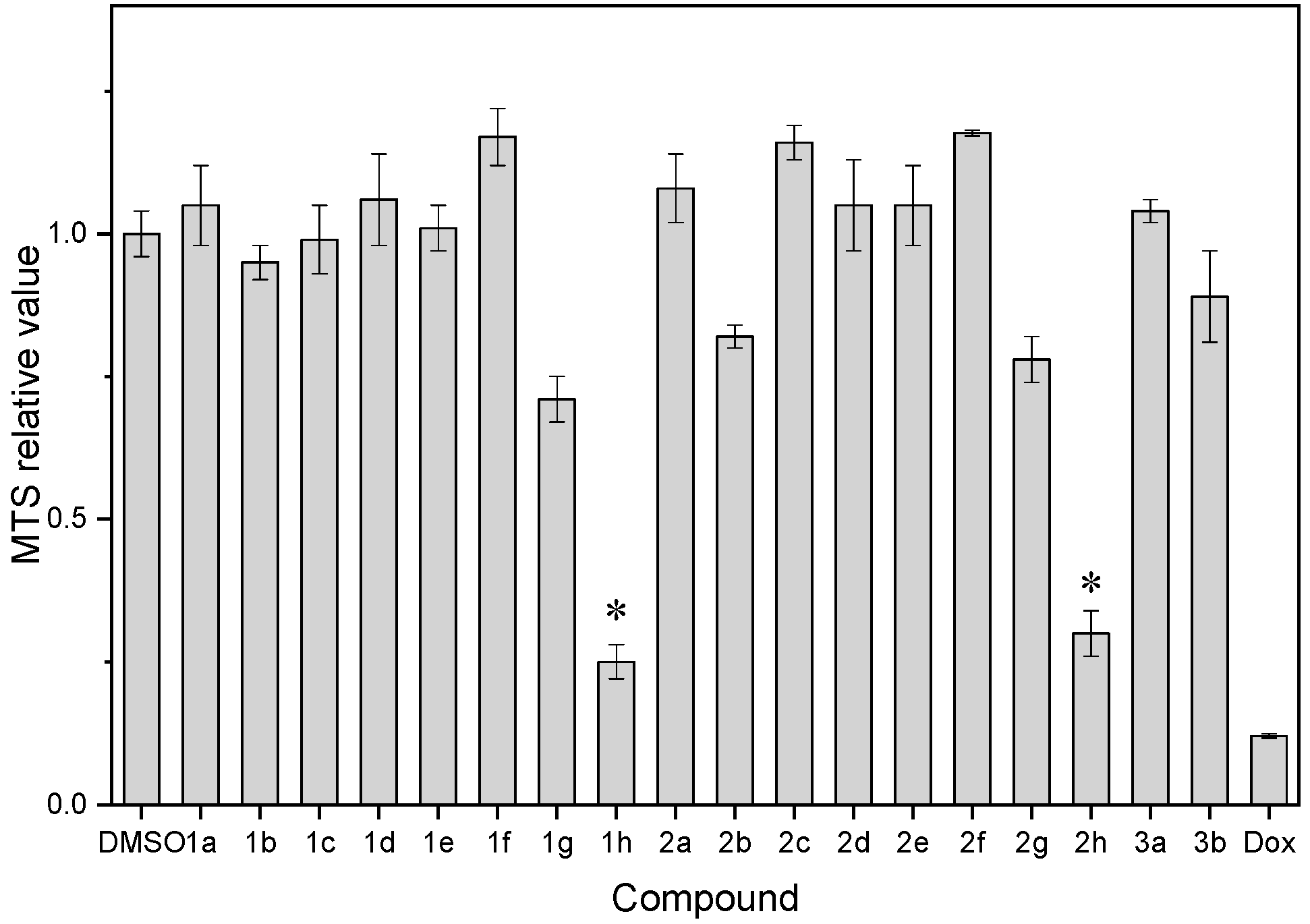 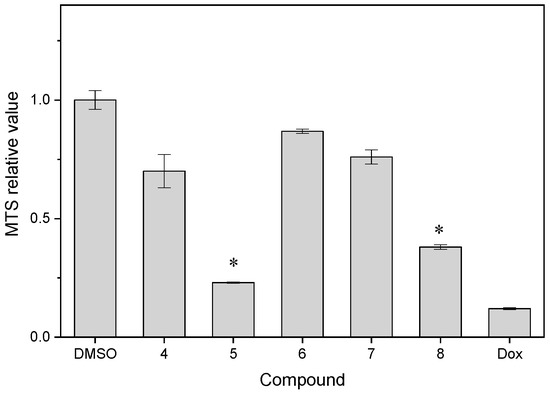 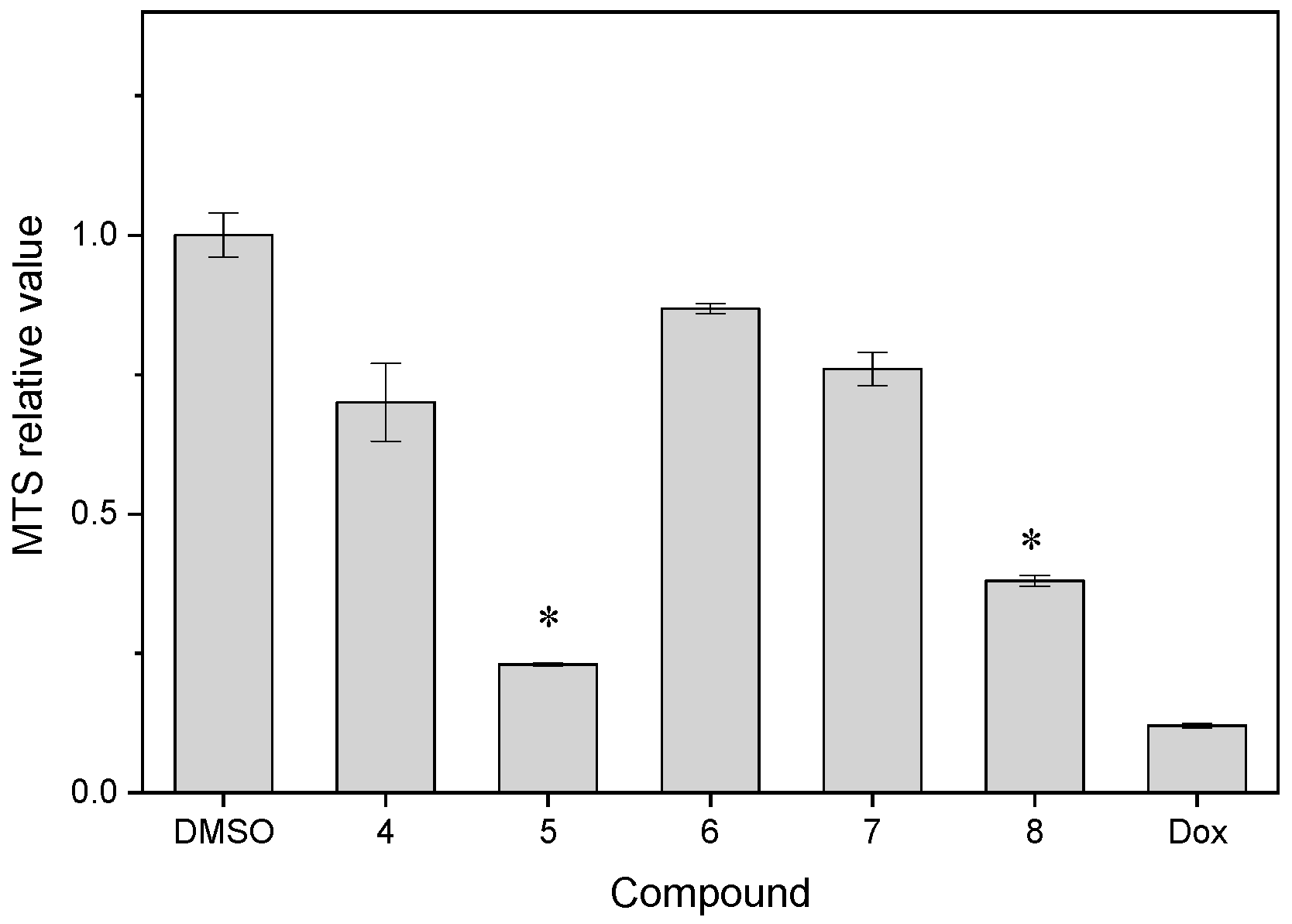 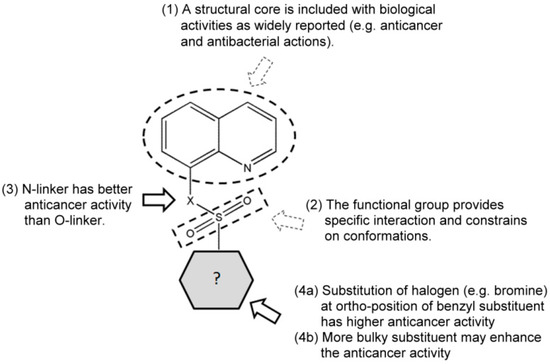 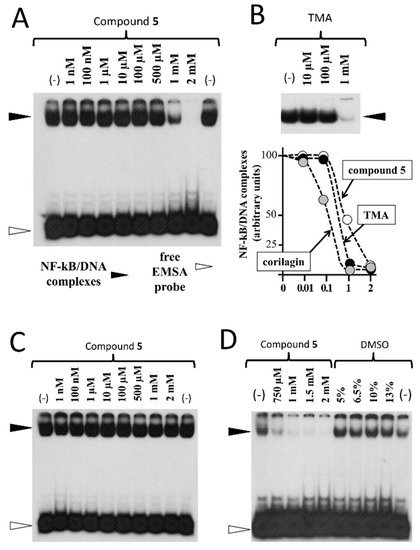 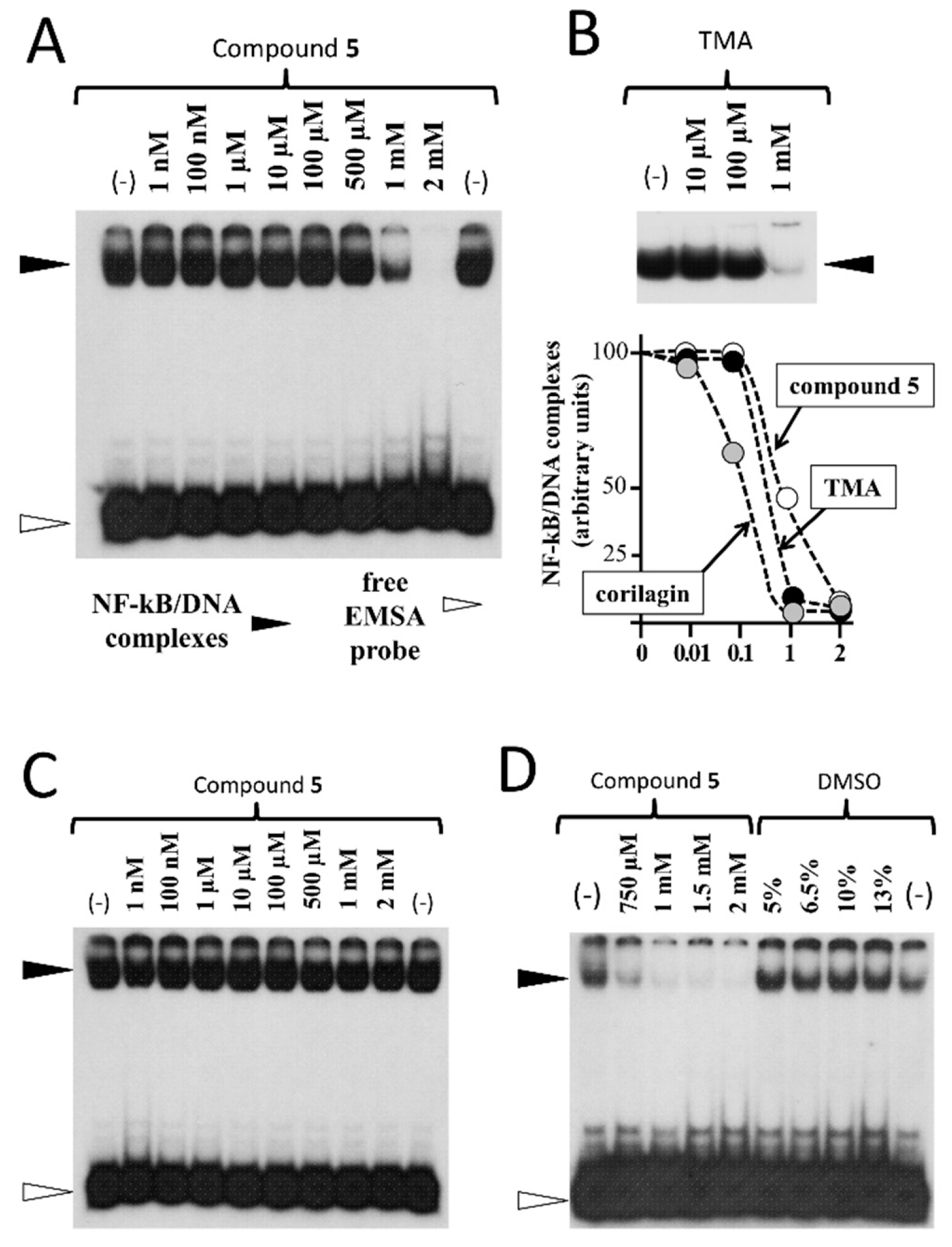 a Cytotoxicity of all compounds 1 to 3 was determined against Hep3B cells using the cell proliferation assay (MTS assay). Cells were treated with the tested compounds at 15 μM for 48 h. Doxorubicin (Dox) was used as positive control while dimethyl sulfoxide (DMSO) was used as vehicle control. Each treatment was performed in three technical and independent replicates, and the average reading to the vehicle control was calculated as the relative MTS value. MTS relative values of DMSO and positive control (Dox) were determined as 1.00 ± 0.04 and 0.120 ± 0.004, respectively. b Estimated by the ALOGPS 2.1 algorithm [19]. c Estimated by the Osiris Property Explorer (https://www.organic-chemistry.org/prog/peo/).d Estimated by the similarity ensemble approach (SEA) [20].

a Cytotoxicity of all compounds were determined against Hep3B cells using the cell proliferation assay (MTS assay) as described in the legend of Table 1. Each treatment was performed in three technical and independent replicates. MTS relative values of DMSO and positive control (Dox) were determined as 1.00 ± 0.04 and 0.120 ± 0.004, respectively. b Estimated by the ALOGPS 2.1 algorithm [19]. c Estimated by the Osiris Property Explorer (https://www.organic-chemistry.org/prog/peo/). d Estimated by the similarity ensemble approach (SEA) [20].

Table 3. Cytotoxicity of compound 5 against three human carcinoma cell lines †.
Table 3. Cytotoxicity of compound 5 against three human carcinoma cell lines †.
† MTS assay was used to evaluate the cytotoxicity of compound 5 on cancer cells. MTS50 is defined as the concentration of the test agent required to reduce the MTS activity by 50% when compared with the vehicle treated control. Each treatment was performed in three technical and independent replicates and the corresponding MTS50 values of compound 5 and doxorubicin (Dox) were obtained for the three human carcinoma cell lines, and treated for 48 h.
We use cookies on our website to ensure you get the best experience. Read more about our cookies here.
Accept
We have just recently launched a new version of our website. Help us to further improve by taking part in this short 5 minute survey here. here.
Never show this again