:
PIEZO1 is a subunit of mechanically-activated, nonselective cation channels. Gain-of-function PIEZO1 mutations are associated with dehydrated hereditary stomatocytosis (DHS), a type of anaemia, due to abnormal red blood cell function. Here, we hypothesised additional effects on the heart. Consistent with this hypothesis, mice engineered to contain the M2241R mutation in PIEZO1 to mimic a DHS mutation had increased cardiac mass and interventricular septum thickness at 8–12 weeks of age, without altered cardiac contractility. Myocyte size was greater and there was increased expression of genes associated with cardiac hypertrophy (Anp, Acta1 and β-MHC). There was also cardiac fibrosis, increased expression of Col3a1 (a gene associated with fibrosis) and increased responses of isolated cardiac fibroblasts to PIEZO1 agonism. The data suggest detrimental effects of excess PIEZO1 activity on the heart, mediated in part by amplified PIEZO1 function in cardiac fibroblasts.
Keywords:
PIEZO1; mechanotransduction; heart; hypertrophy; fibrosis; fibroblasts; calcium

The heart has an intrinsic ability to sense and respond to mechanical stimuli to maintain haemodynamic stability [1]. This process involves the conversion of mechanical stimuli into biochemical events that induce changes in myocardial structure and function. These downstream effects are initially adaptive compensatory responses, but prolonged mechanical stress leads to pathological hypertrophy and fibrosis, and eventually heart failure (HF) [1,2,3,4]. Stretch-activated ion channels have been proposed as mechanical sensors and transducers in the heart [5,6], and recent attention has been given to PIEZO1 calcium (Ca2+)-permeable, nonselective cation channels, which are activated by mechanical forces, such as membrane stretch and fluid flow [7,8,9,10,11,12]. PIEZO1 channels are expressed in cardiac fibroblasts, where they respond to membrane stretch and matrix stiffness, signalling to important downstream mediators, such as interleukin-6 (IL-6), p38 mitogen-activated protein kinase (MAPK), brain natriuretic peptide (BNP), tenascin C (TNC) and transforming growth factor β1 gene expression [13,14,15,16]. Mechanical stretch has been linked to the triggering of inflammatory cascade in the heart, notably through fibroblast activation [17,18]. PIEZO1 is emerging as a potential target in a broad range of inflammation diseases and healing responses [19,20,21,22]. However, PIEZO1-dependent inflammatory response in cardiac fibroblasts appeared to be specific to IL-6 as other proinflammatory cytokines, such as IL-1, were not dysregulated [13]. PIEZO1 is also expressed in cardiac myocytes but at a low level, and cardiac myocyte-specific disruption of PIEZO1 has little or no effect on the cardiac function of young adult mice, while older mice display spontaneous defective pump function [23]. Mice overexpressing PIEZO1 in cardiomyocytes show the same spontaneous HF phenotype, suggesting a role for PIEZO1 channel in maintaining normal heart function. Furthermore, PIEZO1 expression is upregulated during cardiac insult—i.e., in cardiac hypertrophy and HF—and the loss of cardiomyocyte PIEZO1 inhibits adverse remodelling caused by aortic banding in mice [23,24,25,26]. These data suggest the possibility of adverse cardiac effects of gain-of-function (GOF) PIEZO1 mutations that have been linked to dehydrated hereditary stomatocytosis (DHS), a type of anaemia [27,28,29,30]. The GOF mutations all apparently slow channel kinetics, leading to extended opening times and increased PIEZO1 function [28,30,31]. They cause PIEZO1 GOF in red blood cells (RBCs) and so might similarly increase PIEZO1 activity in other cell types. To explore this possibility, we generated a mouse model containing the murine equivalent (M2241R) of a human PIEZO1 GOF mutation (M2225R) [31]. These mice recapitulate many of the features of DHS, as do mice with another PIEZO1 GOF mutation [32]. Therefore, the M2241R mouse is a good model of the human DHS condition, showing the phenotype in heterozygous and homozygous states [31]. In this study, we investigated whether M2241R affects the heart in young adult mice.

The use of animal was authorised by the University of Leeds Animal Welfare and Ethical Review Committee and The Home Office, UK.

Blood pressure was measured noninvasively using the CODA tail-cuff system (Kent Scientific, Torrington, CT, USA) which uses volume pressure recording (VPR) to measure blood pressure by determining the tail blood volume. Mice were placed into a holder to restrict movement and allow access to the tail. The mice were placed into an incubator set at 36 °C and left for 15 min to thermoregulate and acclimatise to the holder. The recording sessions were conducted by the CODA software (v3.0, Kent Scientific, Torrington, CT, USA) and consisted of 20 cycles (5 of which were acclimatization cycles) with 5 s between each cycle. The maximum occlusion pressure was 250 mmHg, deflation time 20 s and minimum volume 15 μL. 2.4. Animals and Tissue Harvest

Animals were euthanized in accordance with Schedule 1 Code of Practice, UK Animals Scientific Procedures Act 1986. Hearts were removed, cleaned and cut in half transversely. The distal part, used for immunohistochemistry, was first mounted in OCT (Tissue-Tek). It was then snap-frozen in liquid nitrogen–precooled isopentane. The proximal part, used for molecular biology, was directly snap-frozen in liquid nitrogen. All tissues were stored at −80 °C.

2.5.2. In Situ Determination of Heart Cross-Sectional Area and Fibrosis

For immunofluorescence detection of fibrosis and cross-section area (CSA) measurements, slides were left to dry for 30 min at room temperature (RT). After rehydration with PBS, samples were fixed for 10 min with 4% PFA, washed, and permeabilized for 10 min with 0.1% triton X100. After 1 h of blocking with 1% BSA in PBS, heart sections were stained at RT for 1 h with CF®488A-conjugated wheat germ agglutinin (WGA) (Biotium, Fremont, CA, USA, 29022-1, 1:100) to label cell membranes and fibrotic scar tissue [34]. Slides were washed and mounted in ProLong Gold Antifade Mountant (ThermoFisher Scientific, Waltham, MA, USA, P36934).

To determine cardiomyocyte CSA and fibrosis, stained sections were imaged using a LSM710 Axio Examiner (Carl Zeiss Ltd., Cambridge, UK) confocal microscope. WGA-488 fluorescence was detected using excitation by 488 Argon laser and detector bandwidth of 498–557 nm. A combination of z-stack and tile-scan images were acquired using a Plan-apochromat 20× (0.8NA) M27 air objective. Maximum intensity images were generated from the z-stack and tile scans were stitched together. Images were exported and analysed with ImageJ software (v1.52p, Bethesda, MD, USA). The CSA was calculated from 5–10 random fields per animal using the Cross-Sectional Analyzer plugin. The fibrosis quantification was performed on whole sections and expressed as a percentage of total tissue.

Cardiac fibroblasts were isolated from hearts digested with collagenase. Fibroblasts were maintained in DMEM supplemented with 10% foetal calf serum and kept in an incubator at 37 °C with 5% CO2, as described previously [35]. Fibroblasts were placed in serum-free media 16 h before treatments with Yoda1 or Vehicle (DMSO). All experiments were performed between passage 1–2.

All data representations are mean ± standard deviation (S.D.). Figure legends state the number of mice (n) analysed for each experiment. Outliers were excluded according to the results of ROUT test (Q = 1%) performed in GraphPad Prism software (v9.0, San Diego, CA, USA). Figure legends also mention the statistical test used to determine statistical significance: two groups were compared using unpaired Student’s t-test, whereas multiple comparisons were assessed using ANOVA followed by post hoc Tukey’s test. For all experiments, significance was considered for values of p < 0.05. For PCR analysis, each sample was tested in duplicate. Echocardiography was performed in a blinded manner.

To investigate whether the GOF mutation alters PIEZO1 function in cells of the heart itself, we isolated cardiac fibroblasts from PIEZO1WT/WT and PIEZO1M-R/M-R mice, and measured intracellular Ca2+ responses to a PIEZO1 agonist, Yoda1, as described previously [13]. The Yoda1 response is amplified in PIEZO1M-R/M-R heart fibroblasts compared with PIEZO1WT/WT (Figure 4a,b). Adenosine triphosphate (ATP)-evoked Ca2+ events were unchanged by the mutation (Figure 4c,d). PIEZO1 activity in cardiac fibroblasts prompted downstream activation of p38 MAPKα (p38-α/MAPK14) by phosphorylation and increased IL-6 secretion due to an increased expression of the Il-6 gene [13]. Yoda1 stimulated PIEZO1M-R/M-R fibroblasts displayed upregulation of Il-6 mRNA expression (Figure 4e) and an increase in phosphorylated p38α (p-p38α) (Figure 4f,g). We then investigated the expression of TNC, a profibrotic protein known to be associated with PIEZO1 channel and IL-6 pathway [15,36]. PIEZO1M-R/M-R fibroblasts showed an increased mRNA (Figure 4h) and protein expression (Figure 4i,j) of TNC upon Yoda1 treatment. The data suggest that PIEZO1 function and downstream signalling are amplified in fibroblasts of PIEZO1M-R/M-R hearts.

The data presented in this study are available from the corresponding authors upon request. 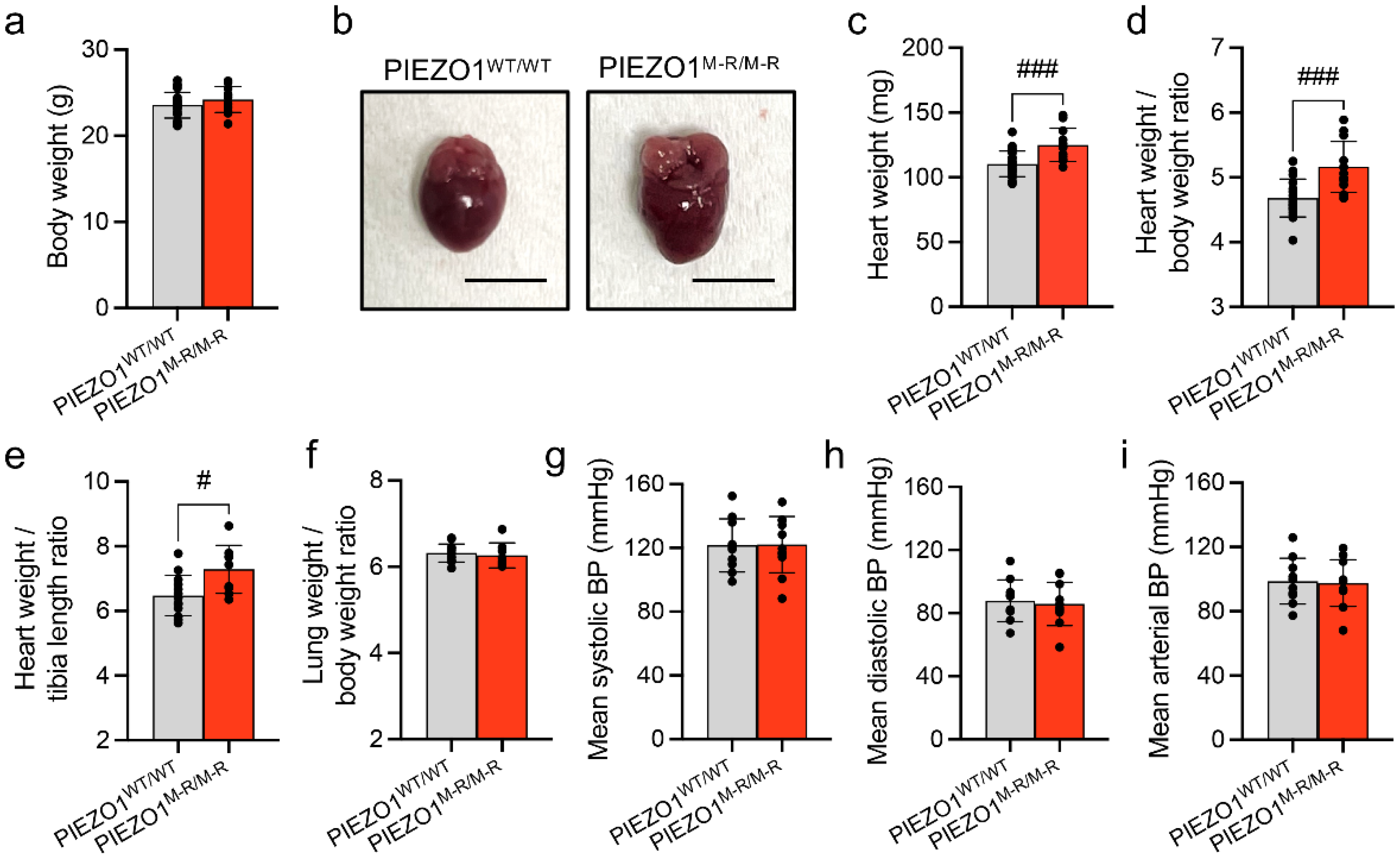 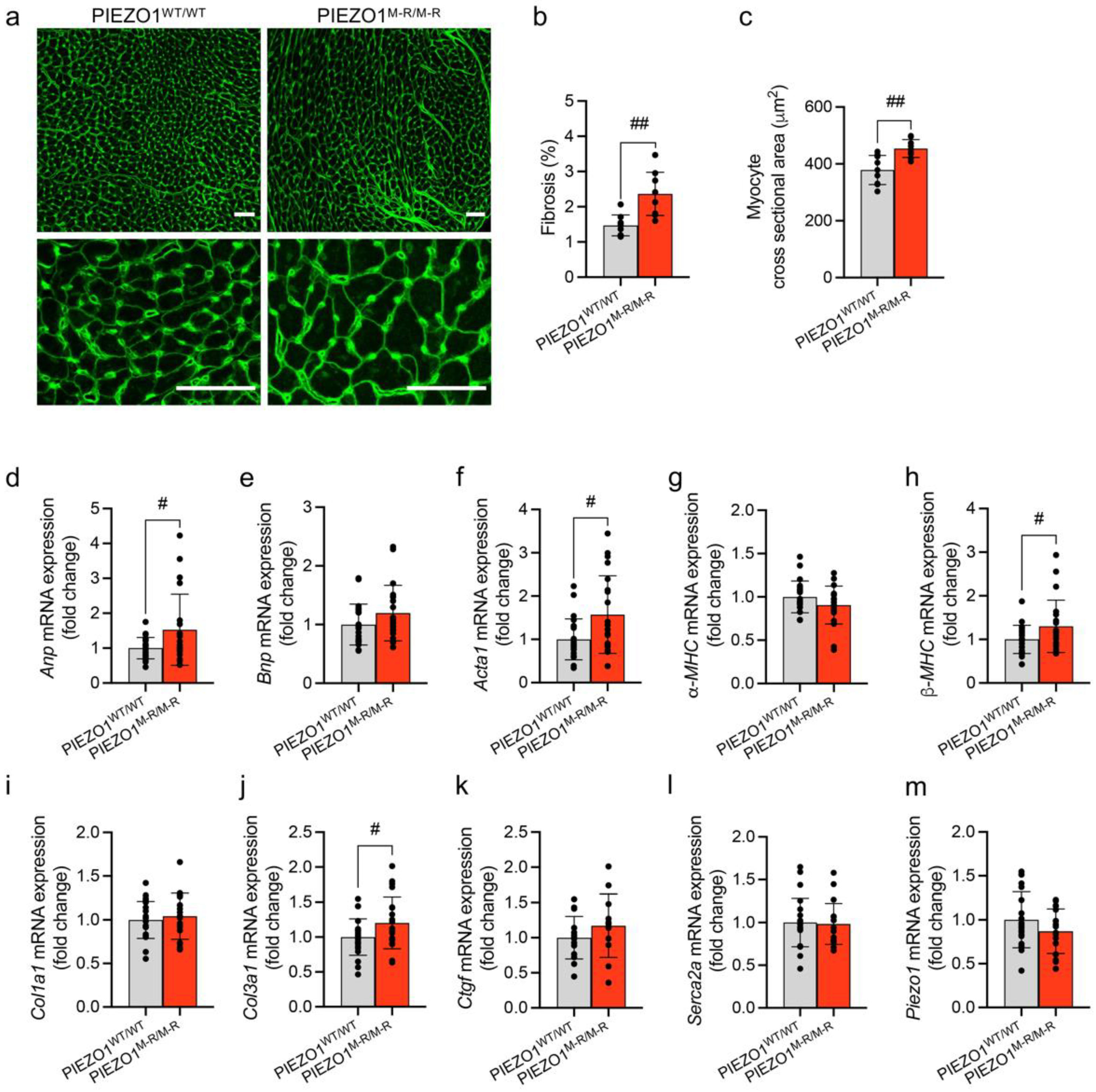