Chemerin (CHEM) is a hormone mainly expressed in adipocytes involved in the regulation of energy homeostasis and inflammatory response. CHEM expression has been demonstrated in the structures of the porcine hypothalamic-pituitary-gonadal axis, as well as in the uterus, trophoblasts and conceptuses of pigs. In this study, we performed high-throughput proteomic analyses (liquid chromatography with tandem mass spectrometry, LC-MS/MS) to examine the influence of CHEM (400 ng/mL) on differentially regulated proteins (DRPs) in the porcine endometrial tissue explants during implantation (15 to 16 days of gestation). Among all 352 DRPs, 164 were up-regulated and 188 were down-regulated in CHEM-treated group. DRPs were assigned to 47 gene ontology (GO) terms (p-adjusted < 0.05). Validation of four DRPs (IFIT5, TGFβ1, ACO1 and PGRMC1) by Western blot analysis confirmed the veracity and accuracy of the LC-MS/MS method used in the present study. We suggest that CHEM, by modulating various protein expressions, takes part in the endometrial cell proliferation, migration and invasion at the time of implantation. It also regulates the endometrial immune response, sensitivity to P4 and the formation of new blood vessels. Additionally, CHEM appears to be an important factor involved in endothelial cell dysfunction during the pathogenesis of preeclampsia. The identification of a large number of DRPs under the influence of CHEM provides a valuable resource for understanding the molecular mechanisms of this hormone action during implantation, which is a prerequisite for better control of pig reproduction. View Full-Text
Keywords: chemerin; pig; implantation; uterus; proteome; early pregnancy; DRPs chemerin; pig; implantation; uterus; proteome; early pregnancy; DRPs
►▼ Show Figures 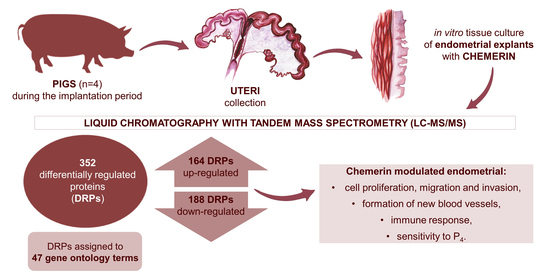