What’s in a Gene? The Outstanding Diversity of MAPT
Previous Article in Journal

Bipedalism, speech, and intellect are the most prominent traits that emerged in the evolution of Homo sapiens. Here, we describe a novel genetic cause of an “involution” phenotype in four patients, who are characterized by quadrupedal locomotion, intellectual impairment, the absence of speech, small stature, and hirsutism, observed in a consanguineous Brazilian family. Using whole-genome sequencing analysis and homozygous genetic mapping, we identified genes bearing homozygous genetic variants and found a homozygous 36.2 kb deletion in the gene of glutamate receptor delta 2 (GRID2) in the patients, resulting in the lack of a coding region from the fifth to the seventh exons. The GRID2 gene is highly expressed in the cerebellum cortex from prenatal development to adulthood, specifically in Purkinje neurons. Deletion in this gene leads to the loss of the alpha chain in the extracellular amino-terminal protein domain (ATD), essential in protein folding and transport from the endoplasmic reticulum (ER) to the cell surface. Then, we studied the evolutionary trajectories of the GRID2 gene. There was no sign of strong selection of the highly conservative GRID2 gene in ancient hominids (Neanderthals and Denisovans) or modern humans; however, according to in silico tests using the Mfold tool, the GRID2 gene possibly gained human-specific mutations that increased the stability of GRID2 mRNA. View Full-Text
Keywords: disequilibrium syndrome; quadrupedal locomotion; speech; congenital cerebellar ataxia; mental retardation; intellectual disability; cerebellum hypoplasia disequilibrium syndrome; quadrupedal locomotion; speech; congenital cerebellar ataxia; mental retardation; intellectual disability; cerebellum hypoplasia
►▼ Show Figures 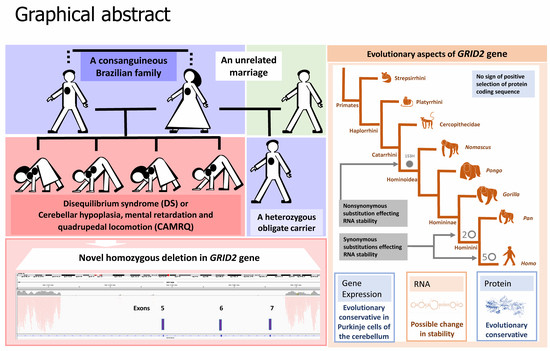