A Novel m6A-Related LncRNA Signature for Predicting Prognosis, Chemotherapy and Immunotherapy Response in Patients with Lung Adenocarcinoma
Next Article in Special Issue

TAR DNA-binding protein 43 (TDP-43) is a predominant component of inclusions in the brains and spines of patients with amyotrophic lateral sclerosis (ALS). The progressive accumulation of inclusions leads to proteinopathy in neurons. We have previously shown that Met1(M1)-linked linear ubiquitin, which is specifically generated by the linear ubiquitin chain assembly complex (LUBAC), is colocalized with TDP-43 inclusions in neurons from optineurin-associated familial and sporadic ALS patients, and affects NF-κB activation and apoptosis. To examine the effects of LUBAC-mediated linear ubiquitination on TDP-43 proteinopathies, we performed cell biological analyses using full-length and truncated forms of the ALS-associated Ala315→Thr (A315T) mutant of TDP-43 in Neuro2a cells. The truncated A315T mutants of TDP-43, which lack a nuclear localization signal, efficiently generated cytoplasmic aggregates that were colocalized with multiple ubiquitin chains such as M1-, Lys(K)48-, and K63-chains. Genetic ablation of HOIP or treatment with a LUBAC inhibitor, HOIPIN-8, suppressed the cytoplasmic aggregation of A315T mutants of TDP-43. Moreover, the enhanced TNF-α-mediated NF-κB activity by truncated TDP-43 mutants was eliminated in the presence of HOIPIN-8. These results suggest that multiple ubiquitinations of TDP-43 including M1-ubiquitin affect protein aggregation and inflammatory responses in vitro, and therefore, LUBAC inhibition ameliorates TDP-43 proteinopathy. View Full-Text
Keywords: ALS; cytoplasmic aggregation; LUBAC; NF-κB; TDP-43; ubiquitin ALS; cytoplasmic aggregation; LUBAC; NF-κB; TDP-43; ubiquitin
►▼ Show Figures 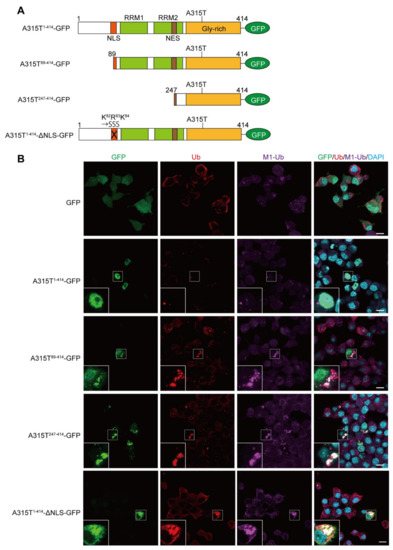