Effects of Omega-3 and Antioxidant Cocktail Supplement on Prolonged Bed Rest: Results from Serum Proteome and Sphingolipids Analysis
Next Article in Special Issue

:
Chronic obstructive pulmonary disease (COPD) is a disease with an inflammatory phenotype with increasing prevalence in the elderly. Expanded population of mutant blood cells carrying somatic mutations is termed clonal hematopoiesis of indeterminate potential (CHIP). The association between CHIP and COPD and its relevant effects on DNA methylation in aging are mainly unknown. Analyzing the deep-targeted amplicon sequencing from 125 COPD patients, we found enhanced incidence of CHIP mutations (~20%) with a predominance of DNMT3A CHIP-mediated hypomethylation of Phospholipase D Family Member 5 (PLD5), which in turn is positively correlated with increased levels of glycerol phosphocholine, pro-inflammatory cytokines, and deteriorating lung function.
Keywords:
clonal hematopoiesis; inflammation; COPD

Accumulation of somatic mutations throughout human life is a clearly defined phenomenon becoming more pronounced by aging. Hematopoietic stem cells (HSCs) with extensive self-renewal capacity are one of the most vulnerable cells to various somatic mutation with 70 mutations per gene for one HSC by age of 70 [1]. Different studies have shown that expansion of mutated HSCs, known as “Clonal hematopoiesis (CH)” is highly increased by aging [2]. CHIP has been described previously to be a driver of altered inflammatory response in chronic diseases, e.g., cardiovascular disease [3]. Age and smoking are the two strongest risk factors of chronic obstructive pulmonary disease (COPD), which contribute to the aberrant inflammatory phenotype of the disease [4]. In a very recent study, CHIP was shown to be associated with disease development and severity of COPD from four different cohorts. Miller et al. identified the increased risk of COPD related to CHIP independently of age, cigarette smoke exposure, and inherited polygenic risk score [5]. In other aspects, the association between CHIP and COPD and more importantly, its relevant effects on DNA methylation as one of the key players in aging are mainly unknown. In this study, we aimed (I) to investigate the prevalence of CHIP in COPD patients, (II) to investigate CHIP-mediated molecular consequences by DNA methylation, metabolomics, and cytokine analyses, (III) to correlate these with lung function parameters, and (IV) to evaluate the causality in macrophages derived from human peripheral blood mononuclear cells (PBMCs) and human precision cut lung slides (PCLS).

Data were obtained from the baseline examination (Visit 1) of the German multicenter COPD cohort COSYCONET (German COPD and Systemic Consequences–Comorbidities Network). COPD was defined according to the GOLD criteria after performing standardized post-bronchodilator spirometry. COSYCONET is a German multicenter prospective observational trial, which recruited 2741 patients aged 40 years and older with diagnosis of COPD between 2010 and 2013 in 31 study centers. The study protocol has been previously described in detail [6] and in the Supplementary Materials.

Samples of 125 COPD patients were assessed for the presence of CHIP by the Illumina TruSeq Custom Amplicon Low Input assay. The panel includes 594 amplicons in 56 genes commonly mutated in CHIP and myeloid malignancies (Supplementary Table S1) [9]. The pooled libraries were sequenced on a NextSeq 500 sequencer (Illumina) using the NextSeq 500/550 Mid Output, version 2 kit (300 cycles) according to the manufacturer’s instructions. The procedure has been described in detail in the Supplementary Materials.

Oxylipins and choline pathway metabolites were extracted from plasma by adding 3× the volume of ethyl acetate and 4× the volume of methanol, respectively. Either the upper layer (oxylipins) or supernatant (cholines) was analyzed on an Agilent 1290 Infinity LC system coupled to a Sciex QTrap 5500 mass spectrometer in negative (oxylipins) or positive (cholines) ionization modes. TNF-α and IL-6 were analyzed using ELISA kits. The detailed protocol for plasma collection and metabolome analysis has been explained in the Supplementary Materials.

Generation of human macrophages from PBMCs, RNA isolation, complementary DNA synthesis, and quantitative PCR were performed as previously described [10]. The brief information has been provided in the Supplementary Materials.

PCLS were cut 400 µm thick using a vibratome (Microm HM650V, Thermo Fisher Scientific Inc., Waltham, MA, USA) and cultured in growth media. PCLS were then treated with conditional media of a DNMT3A-deficient monocyte cell line (THP1) for 48 h. The tissue lysates were taken for protein expression studies. Detailed protocol has been explained in the Supplementary Materials.

The tissues were lysed in RIPA lysis buffer containing protease and phosphatase inhibitors. Subsequent step have been described in detail in the supplementary file.

All analyses were carried out with the statistics software R v3.4 https://www.R-project.org (accessed on 5 July 2019). Lung function data were analyzed with general linear models using the log-transformed response values, and p values were adjusted by confounding factors including age, sex, smoking status, and pack years.

In this study, we investigated the prevalence of CHIP in a COPD patient cohort (COSYCONET) (Table 1).
Deep targeted amplicon sequencing in the patients showed an enhanced incidence of CHIP mutations compared with age-matched controls (~20%), with the striking predominance of somatic mutations in the gene DNMT3A (18 out of 25) (Figure 1A). The same profile was detected in early-stage COPD (Gold 0). In-depth analysis of the mutations and in silico analysis via Swiss Model https://swissmodel.expasy.org/ (accessed on 5 July 2019) identified 6 mutations (from 20) in DNMT3A which significantly alter its structure, suggesting reduced or even loss of methyl-transferase activity (Supplementary Figure S1, In silico analysis of DNMT3A and Supplementary Table S4). Interestingly, DNA methylation analysis demonstrated massive hypomethylation in DNMT3A-CHIP COPD versus Non-CHIP COPD patients, in up to 95% of top differentially methylated CpG islands, and 80% of differentially methylated CpG sites and tilings (Figure 1B).
As a possible indicator of CHIP mutations [3], we evaluated differences in proinflammatory cytokine formation and lung function between CHIP-positive and CHIP-negative early COPD patients. In early-stage COPD patients, significant higher levels of circulating inflammatory mediator IL6 and slight increase of TNFα were indeed noted in the CHIP mutation carriers, concomitant with increased functional residual capacity and decreased PaCO2 levels, indicating ventilation/perfusion mismatch and forced ventilatory drive (Figure 1C,D). The numbers of CHIP-positive early COPD patients were too low to link these findings to the smoking history of these patients.
To prove causality, DNMT3A was silenced in non-stimulated macrophages derived from human PBMCs, a significant resulting in an upregulation of pro-inflammatory cytokines, especially IL6 and slightly TNFα (Figure 1E). Human PCLS cultured with conditional media of DNMT3A deficient-THP1 confirmed a link between DNMT3A dysfunction and enhancement of pro-inflammatory (IL-1ß and TNFα) responses (Figure 1F–H). Nevertheless, the DNA methylation status of inflammatory cytokines was not altered (Supplementary Table S5), raising the intriguing possibility of additional molecular players driving the pro-inflammatory gene expression. The top hypomethylated tiling of genes includes Transmembrane Protein 232 (TMEM232), Glycophorin A (GYPA), and Follistatin Like 4 (FSTL4), which were previously shown to be associated with COPD and inflammation [11] (Figure 2A).
Notably, one of the top hypomethylated gene families that could be associated with both inflammation and COPD is Phospholipase D Family Member 5 (PLD5). We observed that in DNMT3A-CHIP COPD patients, PLD5 is hypomethylated (Figure 2B) and positively correlated with PaCO2 levels of DNMT3A-CHIP COPD, a phenomenon that was not observed in non-CHIP COPD patients (Figure 2C,D). Importantly, PLD5 methylation levels negatively correlated with inflammatory cytokines in CHIP-positive COPD patients, but not in CHIP-negative patients (Figure 2E,F), confirming that PLD5-mediated metabolic pathway modulates systemic oxidative stress and inflammation [12].
Phospholipase D isoforms are lipid-signaling enzymes that preferentially hydrolyze phosphatidylcholine (PC), thus generating phosphatidic acid and choline. Phosphatidic acid is further metabolized to either diacylglycerol (DAG) by phosphatidate phosphohydrolase (lipid phosphate phosphohydrolase) or lysophosphatidic acid (LPA) by phospholipase A1/A2 (PLA). PLAs are the rate-limiting enzyme for the downstream synthesis of prostaglandins and leukotrienes that are the main mediators of inflammation [12]. Importantly, previous studies confirmed the involvement of PLAs in the COPD-associated inflammation [13] although there are some gaps related to the regulation of specific enzymes in this pathway. To explore whether DNMT3A-CHIP mutations may explain these underlying molecular mechanisms, we performed a metabolome analysis of arachidonic acid-related metabolites as well as choline-containing metabolites in human plasma obtained from DNMT3A-CHIP COPD and Non-CHIP COPD patients. Notably, higher levels of glycerol phosphocholine were observed in DNMT3A-CHIP COPD versus Non-CHIP COPD patients (Figure 2G,H), which are negatively correlated with PLD5 methylation levels.
We conclude that somatic mutations in hematopoietic cells, specifically in the most commonly mutated CHIP driver gene DNMT3A, are increased in COPD and may be associated with metabolic and inflammatory sequelae with the functional outcome (Figure 2I). Underlying mechanisms such as smoking or the lung disease itself may enhance the CHIP frequency in the bone marrow stem cell niche, which then—as a vicious feedback loop—may amplify the pulmonary pathogenetic sequelae. Long-term observations on the impact of CHIP on the course of COPD are mandatory.

This work was supported by the Max Planck Society, the Cardio-Pulmonary Institute (CPI), the German Center for Lung Research (DZL), and the Deutsche Forschungsgemeinschaft (DFG, German Research Foundation)—Project number 268555672—SFB 1213 (Project A01, A05 to SSP, A07 to NW and Project A10* to RS) and European Research Council (ERC) Consolidator Grant (#866051 to SSP). 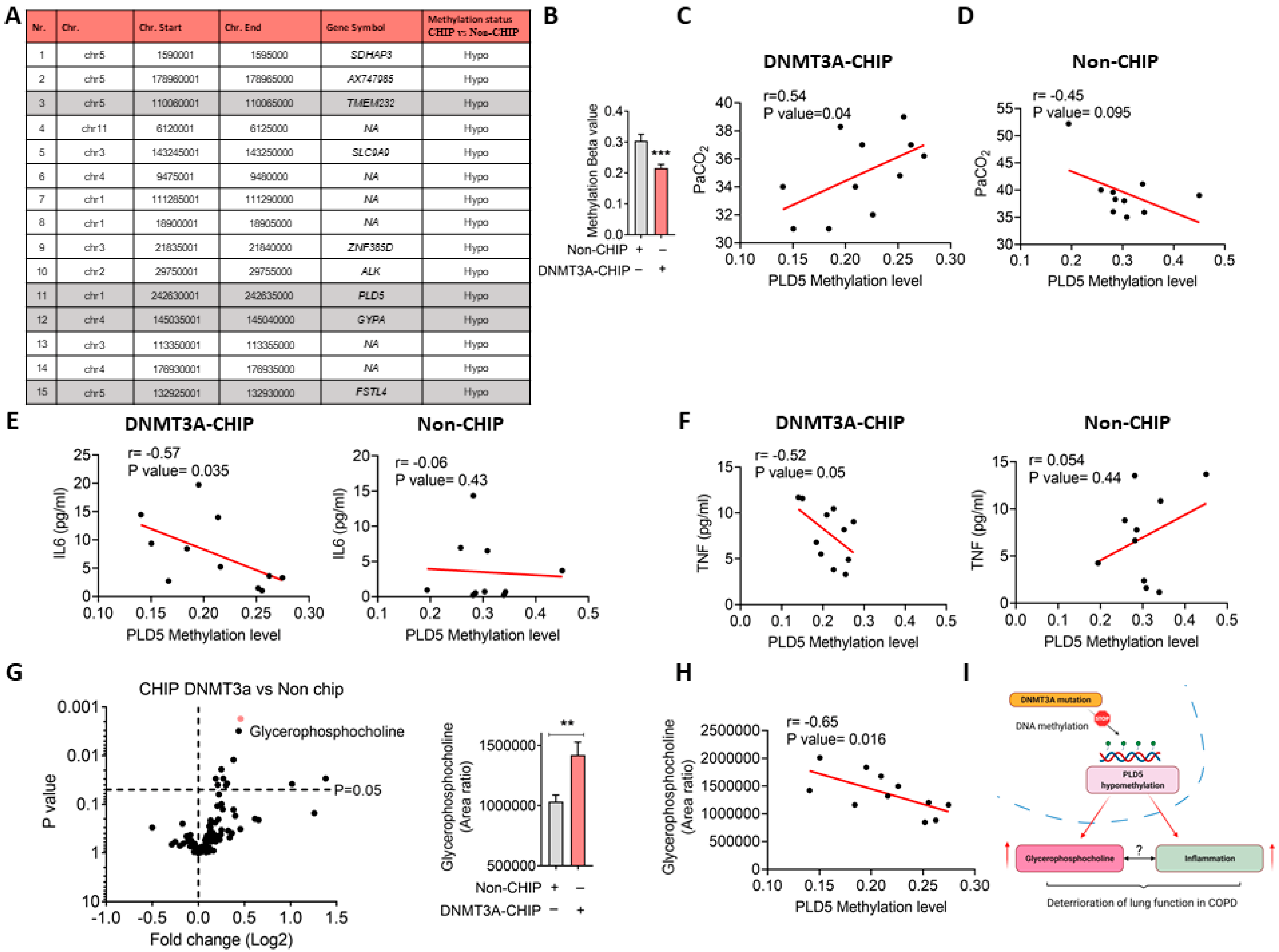