Butyrate and the Intestinal Epithelium: Modulation of Proliferation and Inflammation in Homeostasis and Disease
Next Article in Special Issue

Some β-mannans, including those in coffee bean and soy, contain a mannose backbone with β-(1→4) bonds. Such mannooligosaccharides could have immunological functions involving direct interaction with immune cells, in addition to acting as prebiotics. This study aimed at assessing the immunological function of mannooligosaccharides with β-(1→4) bond, and elucidating their mechanism of action using bone marrow-derived murine dendritic cells (BMDCs). When BMDCs were stimulated with the mannooligosaccharides, only β-Man-(1→4)-Man significantly induced production of cytokines that included IL-6, IL-10, TNF-α, and IFN-β, and enhanced CD4+ T-cell stimulatory capacity. Use of putative receptor inhibitors revealed the binding of β-Man-(1→4)-Man to TLR4/MD2 complex and involvement with the complement C3a receptor (C3aR) for BMDC activation. Interestingly, β-Man-(1→4)-Man prolonged the production of pro-inflammatory cytokines (IL-6 and TNF-α), but not of the IL-10 anti-inflammatory cytokine during extended culture of BMDCs, associated with high glucose consumption. The results suggest that β-Man-(1→4)-Man is an immunostimulatory molecule, and that the promotion of glycolysis could be involved in the production of pro-inflammatory cytokine in β-Man-(1→4)-Man-stimulated BMDCs. This study could contribute to development of immune-boosting functional foods and a novel vaccine adjuvant.
Keywords: mannobiose; dendritic cells; immunostimulation mannobiose; dendritic cells; immunostimulation

Mannans are D-mannose-based polysaccharides that comprise the outermost layer of the cell wall in plants, fungi, and yeast [1]. Mannans range from pure mannans containing only mannose to glucomannans and galactomannans comprised of mannosyl residues linked by various glucosidic linkages such as α-(1→2)-, α-(1→3)-, α-(1→6)-, β-(1→2)-, and/or β-(1→4)-links bonds [2,3]. The immunological properties of mannans are diverse, depending on their structures and source. For instance, N-linked and O-linked mannans derived from Candida albicans induce anti-fungal protective immunity [4]. Mannans are also significant virulence factors associated with the severity and pathogenesis of Candida infections [2,3,4]. In contrast, α-mannan from the cell wall of the yeast Saccharomyces cerevisiae induces anti-inflammatory responses by inducing the anti-inflammatory cytokine IL-10 and the co-inhibitory molecule programmed death-ligand 1 in dendritic cells (DCs) [5]. β-Galactomannans from soy also appears to induce such anti-inflammatory properties [6]. These observations indicate that structures of mannosyl residues are an important factor determining the immunological properties of mannan.
Mannans are a valuable source of mannooligosaccharides [3]. Physical, chemical, and mechanical methods that include enzymatic hydrolysis, acid hydrolysis, and ultrasonic degradation of mannans have been developed to prepare mannooligosaccharides in food technology [1,3]. In general, non-digestible oligosaccharides are expected to improve gastrointestinal health by inducing both the growth of beneficial bacteria and the production of short-chain fatty acids (SCFAs) by bacteria [7,8]. In addition, a previous study showed that crude mannooligosaccharides or β-Man-(1→4)-Man (β-(1→4)-mannobiose: Man2) stimulates cytokine production in RAW264.7 macrophages, and exerts anti-inflammatory effects in murine models [9,10]. However, the oligomer size of β-(1→4)-mannooligosaccharides that induces a potent immunological response is unknown.
DCs play a central role in immune responses; they are essential as a bridge between innate and acquired immunity [11,12]. DCs are equipped with a diverse array of specialized receptors, including co-stimulatory molecules and pattern-recognition receptors to specifically recognize “non-self” components [13]. This study assessed the function of several mannooligosaccharides with β-(1→4) bonds on bone marrow-derived murine DCs (BMDCs) and their underlying mechanisms. Among the tested mannooligosaccharides, only Man2 was capable to activate BMDCs. Man2 induced production of cytokines including type I interferon with anti-viral and immune-modulating functions in DCs via Toll like receptor (TLR)-4 and complement C3a receptor (C3aR) engagement. In addition, Man2 enhanced the T-cell stimulatory capacity of DCs. The results suggest that Man2 has potential as a vaccine adjuvant and an immunostimulatory component for functional foods.

Female C57BL/6J or BALB/c mice were purchased from either Japan SLC, Inc., or Jackson Laboratories (Bar Harbor, ME, USA). OT-II mice were provided by Prof. Ishi Naoto (Tohoku University). The mice were housed under pathogen free conditions. All animal experiments were performed in accordance with either the rules on animal experiments at Tohoku University (2019AgA-026) or the German animal protection law (granting authority: RP Darmstadt).

2.8. Analysis of Metabolic State of BMDCs

The Warburg effect in stimulated BMDC cultures was determined photometrically 72 h post stimulation with the indicated concentrations of 1.0 to 50 μM Man2 and 10 μg/mL of LPS by quantifying the optical density (OD) of culture supernatants at 570  nm by SpectraMAX340PC (Molecular Devices, San Jose, CA, USA) and calculating the Warburg effect as 1/OD570 normalized to unstimulated controls. Glucose concentrations in culture supernatants were determined 72 h post-stimulation using the Glucose (GO) Assay Kit (Sigma-Aldrich, St. Louis, MO, USA). The metabolic rate was derived mathematically from the measured glucose concentrations by calculating the glucose consumption in % in relation to medium without BMDCs (glucose conc. in RPMI1640 = 2  mg/mL).

3.1. Man2 Induces Expression of Co-Stimulatory Molecule and Production of Cytokine in RAW264.7 Cells

To assess the effect of Man2 on DC activation, the expression levels of co-stimulatory and MHC class II molecules and cytokine production in BMDCs, primary cultured DCs, were measured 24 h after stimulation with Man2. As well as LPS, Man2 remarkably enhanced the expression of CD40, CD80, and CD86 on the BMDC surface, although this effect was not observed for the expression levels of MHC class II molecules (I-A/I-E) (Figure 3A, Figures S2 and S3). In addition, Man2 induced the production of pro-inflammatory cytokines IL-6 (Figure 3B and Figure S3), TNF-α and IL-1β (Figure S4), anti-inflammatory cytokine IL-10 (Figure 3B and Figure S3), and the anti-viral defense cytokine IFN-β (Figure 3B) in BMDCs. The threshold concentration of Man2 for the induction of detectable levels of CD40 expression and cytokine production in BMDCs, was 1.0 to 5.0 μM (34.43 to 171.2 ng/mL) (Figure 3B, Figures S4 and S5). Other mannooligosaccharides did neither induce the expression of co-stimulatory molecules nor production of cytokines in BMDCs (Figures S2 and S3).
Next, the effect of Man2 on the T-cell stimulatory capacity of BMDCs was assessed in the co-culture system with splenic OT-II cells, i.e., transgenic CD4+ T-cells expressing monoclonal OVA-specific T-cell receptors on the C57BL/6 background. Here, stimulation with BMDCs with 5.0 or 10 μM Man2 significantly enhanced IL-2 production by OT-II cells upon stimulation with 100 μg/mL of OVA (Figure 3C). A higher concentration of Man2 (50 μM) and OVA (1000 μg/mL) reduced IL-2 production by OT-II cells. This reduction of IL-2 production is likely due to overstimulation of CD4+ T-cells. It is consistent with our previous study showing, that overstimulation of OT-II cells with modified OVA reduced T-cell activation in co-culture with BMDCs [17]. Taken together, these results suggest, that Man2 can enhance the CD4+ T-cell stimulatory capacity of BMDCs.

To elucidate the mechanism of Man2-mediated BMDC activation, we attempted to identify receptor(s) that bound to Man2. BMDCs were pre-treated with different inhibitors of putative receptors, which are known to binds carbohydrates, before Man2 stimulation (Figure 4). TLR-4 inhibition by TAK-242 remarkably suppressed the stimulatory effect of Man2 on CD40, and CD80, CD86 expression in BMDCs (Figure 4 and Figure S6A), although the effect was not observed for I-A/I-E expression. In addition to TAK-242, another TLR4 inhibitor C34, C3aR inhibitor SB290157, Dectin-1 inhibitor WGP® Soluble (whole glucan particle), and the mannose receptor (MR, CD206) inhibitor α-mannan all resulted in statistically significant reduction of CD40 expression in Man2-stimulated BMDCs (Figure S6B), but the changes in the expression were low.
TAK-242 also significantly reduced Man2-induced IL-6, IL-10, TNF-α, IL-1β, and IFN-β production (Figure 5, Figure S7 and S8). C34 and SB290157 moderately reduced Man2-induced IL-6, TNF-α, IL-1β, and IFN-β production (Figure 5A, Figures S7 and S8), but did not affect IL-10 production in Man2-stimulated BMDCs (Figure 5B). The TLR4- and C3aR-inhibitors also reduced cytokine production in LPS-stimulated BMDCs (Figure 5 and Figure S8). Statistical analysis indicated that both WGP® Soluble and α-mannan suppressed IL-6 production in Man2- or LPS-stimulated BMDCs (Figure 5A). However, the reduction level by WGP is very moderate and probably lacks biological significance. The WGP® Soluble did not suppress IL-10 production in the BMDCs (Figure 5B), whereas α-mannan enhanced it (Figure 5B). The viability assay based on WST-8 (2-(2-methoxy-4-nitrophenyl)-3-(4-nitrophenyl)-5-(2,4-disulfophenyl)-2H-tetrazolium, monosodium salt) showed, that the mannooligosaccharides and the inhibitors did not reduce the viability of BMDCs at the tested concentrations (Figure S9). These results suggest, that TLR4 and C3aR are involved in Man2-stimulated BMDC activation.

To gain insight into the mechanism of Man2-driven activation of BMDCs, we stimulated the cells with either Man2 or LPS and analyzed the signaling pathways (Figure 6). LPS induced the phosphorylation of p38 kinase, p42/44 kinases, stress-activated protein kinase/c-Jun N-terminal kinase (SAP/JNK), NF-κB/p65, and mTOR-related p70 ribosomal protein S6 kinase (p70S6K), and reduced expression of NF-κB inhibitor α (IkBα) (Figure 6). Man2 also induced dose-dependently higher phosphorylation of all tested MAPKs (p38, p42/44 kinases, and SAP/JNK). The levels of phosphorylation of the tested kinases (except NFkB/p65 and p70S6K) in BMDCs stimulated at 50 μM Man2 were significantly higher than those in non-stimulated cells. Man2 induced dose-dependently, but not significantly higher phosphorylation of NF-kB/p65, and reduced IkBα expression, while phosphorylation of p70S6K was induced only marginally (Figure 6). These results suggest that Man2 mainly activates the kinase- and NF-kB-related signaling cascades, but not the mTOR/p70S6K cascade, in contrast to this LPS activates all these cascades.

The data that support the findings of this study are available from the corresponding authors, upon reasonable request. 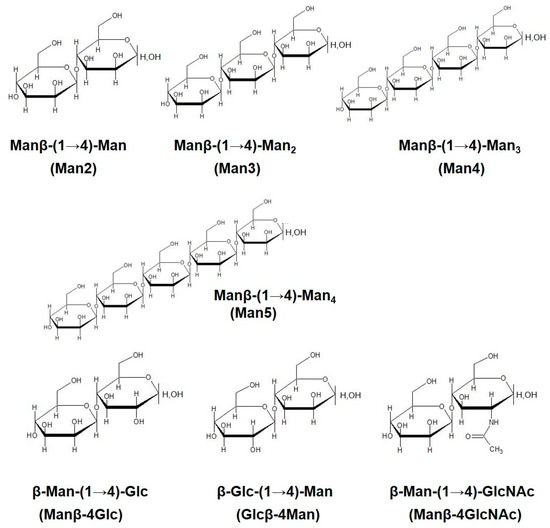 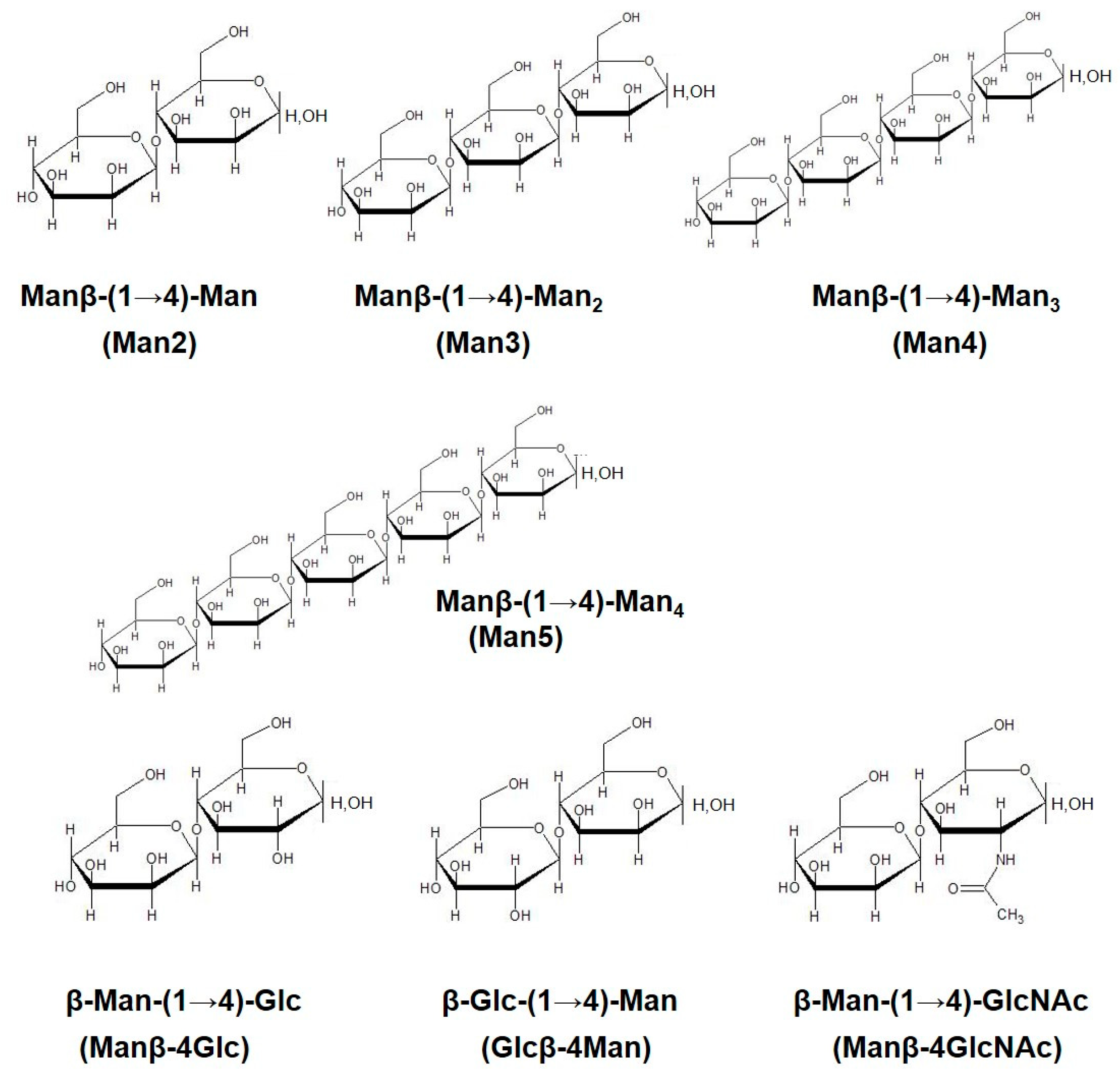 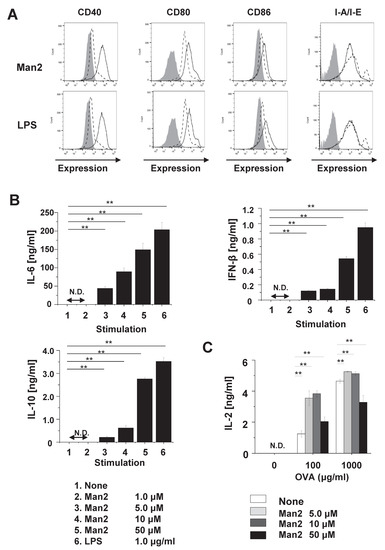 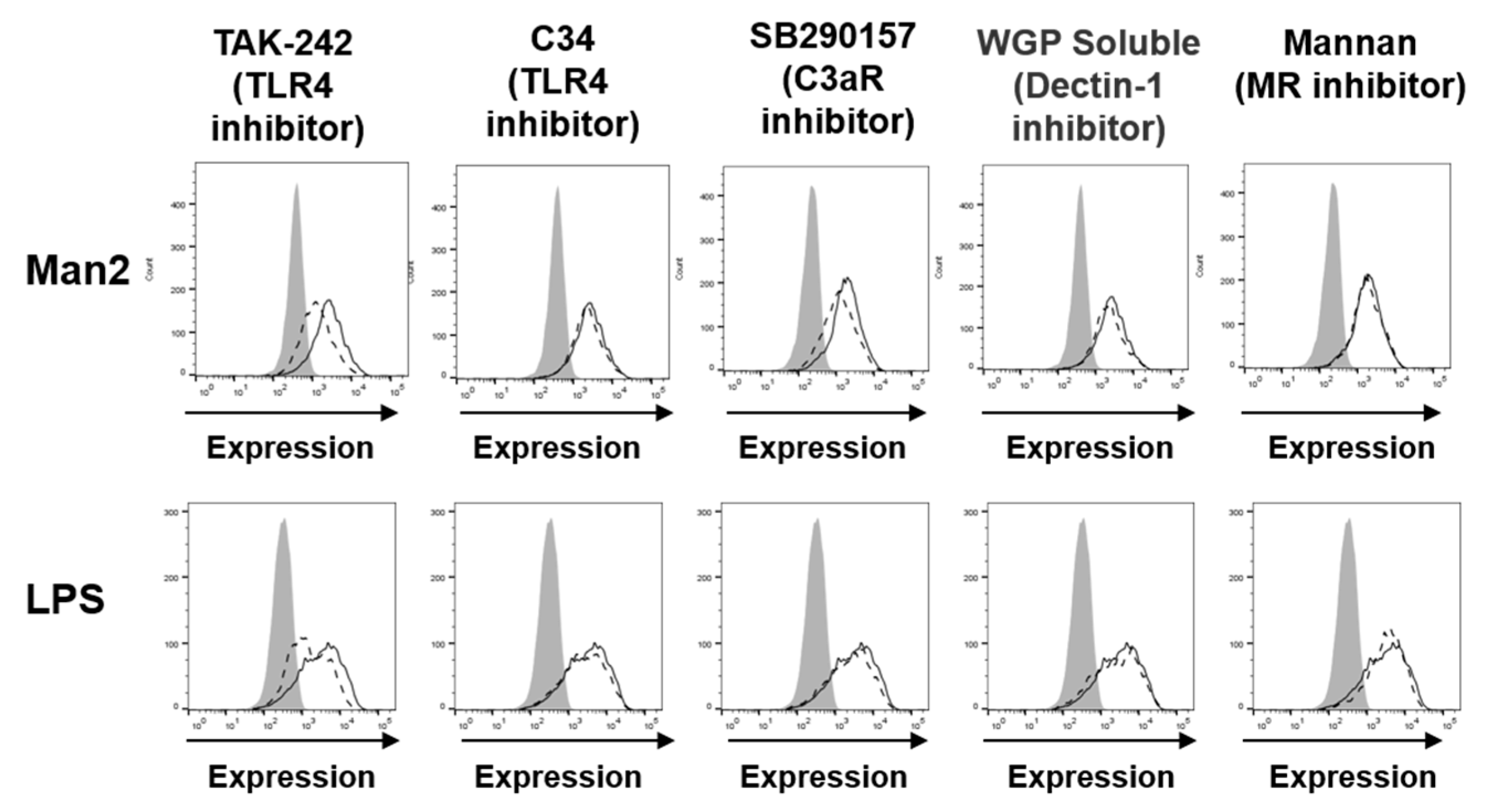 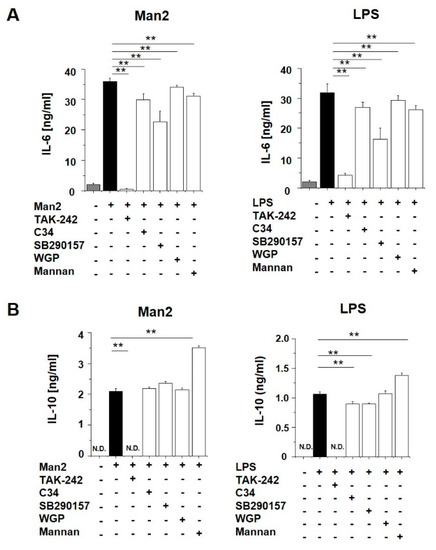 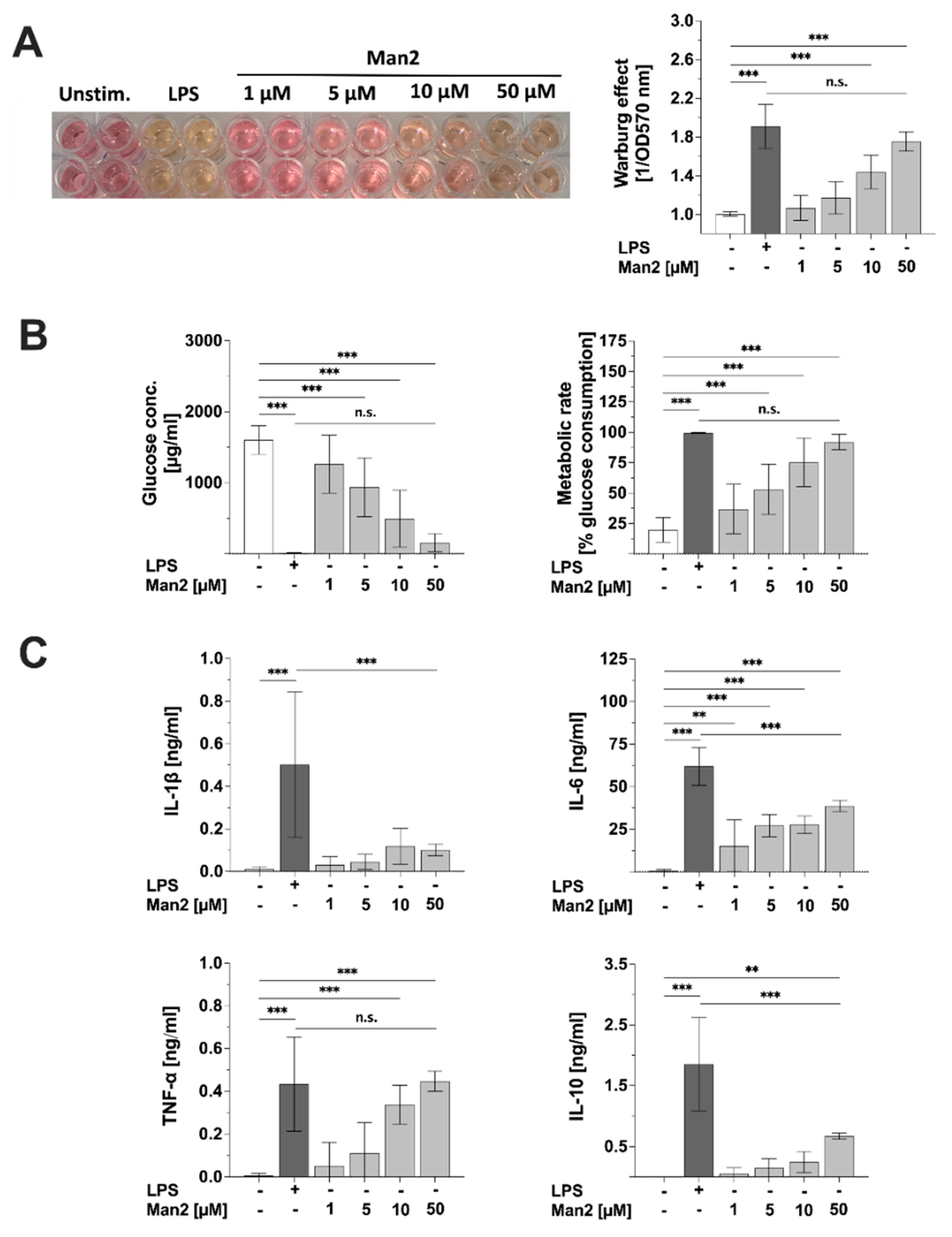