Transcending toward Advanced 3D-Cell Culture Modalities: A Review about an Emerging Paradigm in Translational Oncology
Previous Article in Journal

CRISPR/Cas13-Based Approaches for Ultrasensitive and Specific Detection of microRNAs

Infections with the deadliest malaria parasite, Plasmodium falciparum, are accompanied by a strong immunological response of the human host. To date, more than 30 cytokines have been detected in elevated levels in plasma of malaria patients compared to healthy controls. Endothelial cells (ECs) are a potential source of these cytokines, but so far it is not known if their cytokine secretion depends on the direct contact of the P. falciparum-infected erythrocytes (IEs) with ECs in terms of cytoadhesion. Culturing ECs with plasma from malaria patients (27 returning travellers) resulted in significantly increased secretion of IL-11, CXCL5, CXCL8, CXCL10, vascular endothelial growth factor (VEGF) and angiopoietin-like protein 4 (ANGPTL4) if compared to matching controls (22 healthy individuals). The accompanying transcriptome study of the ECs identified 43 genes that were significantly increased in expression (≥1.7 fold) after co-incubation with malaria patient plasma, including cxcl5 and angptl4. Further bioinformatic analyses revealed that biological processes such as cell migration, cell proliferation and tube development were particularly affected in these ECs. It can thus be postulated that not only the cytoadhesion of IEs, but also molecules in the plasma of malaria patients exerts an influence on ECs, and that not only the immunological response but also other processes, such as angiogenesis, are altered. View Full-Text
Keywords: Plasmodium falciparum; malaria; endothelial cells; cytokines Plasmodium falciparum; malaria; endothelial cells; cytokines
►▼ Show Figures 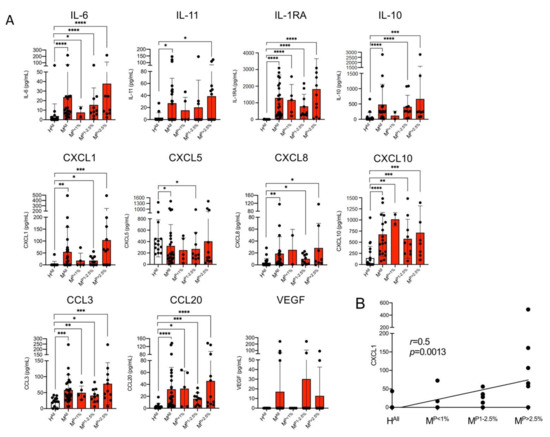