Wound repair of cell membranes is essential for cell survival. Myosin II contributes to wound pore closure by interacting with actin filaments in larger cells; however, its role in smaller cells is unclear. In this study, we observed wound repair in dividing cells for the first time. The cell membrane in the cleavage furrow, where myosin II localized, was wounded by laserporation. Upon wounding, actin transiently accumulated, and myosin II transiently disappeared from the wound site. Ca2+ influx from the external medium triggered both actin and myosin II dynamics. Inhibition of calmodulin reduced both actin and myosin II dynamics. The wound closure time in myosin II-null cells was the same as that in wild-type cells, suggesting that myosin II is not essential for wound repair. We also found that disassembly of myosin II filaments by phosphorylation did not contribute to their disappearance, indicating a novel mechanism for myosin II delocalization from the cortex. Furthermore, we observed that several furrow-localizing proteins such as GAPA, PakA, myosin heavy chain kinase C, PTEN, and dynamin disappeared upon wounding. Herein, we discuss the possible mechanisms of myosin dynamics during wound repair. View Full-Text
Keywords: actin; cell membrane; cleavage furrow; laserporation; myosin; wound repair actin; cell membrane; cleavage furrow; laserporation; myosin; wound repair
►▼ Show Figures 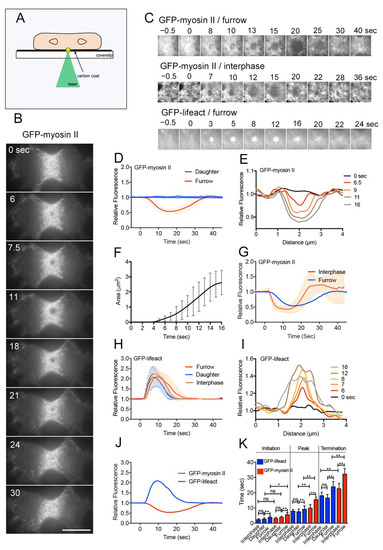