Cellular Senescence and Vitamin D Deficiency Play a Role in the Pathogenesis of Obesity-Associated Subclinical Atherosclerosis: Study of the Potential Protective Role of Vitamin D Supplementation

Impaired fetal growth is one of the most important causes of prematurity, stillbirth and infant mortality. The pathogenesis of idiopathic fetal growth restriction (FGR) is poorly understood but is thought to be multifactorial and comprise a range of genetic causes. This research aimed to investigate non-coding RNAs (lncRNAs) in the placentas of male and female fetuses affected by FGR. RNA-Seq data were analyzed to detect lncRNAs, their potential target genes and circular RNAs (circRNAs); a differential analysis was also performed. The multilevel bioinformatic analysis enabled the detection of 23,137 placental lncRNAs and 4263 of them were classified as novel. In FGR-affected female fetuses’ placentas (ff-FGR), among 19 transcriptionally active regions (TARs), five differentially expressed lncRNAs (DELs) and 12 differentially expressed protein-coding genes (DEGs) were identified. Within 232 differentially expressed TARs identified in male fetuses (mf-FGR), 33 encompassed novel and 176 known lncRNAs, and 52 DEGs were upregulated, while 180 revealed decreased expression. In ff-FGR ACTA2-AS1, lncRNA expression was significantly correlated with five DEGs, and in mf-FGR, 25 TARs were associated with DELs correlated with 157 unique DEGs. Backsplicing circRNA processes were detected in the range of H19 lncRNA, in both ff- and mf-FGR placentas. The performed global lncRNAs characteristics in terms of fetal sex showed dysregulation of DELs, DEGs and circRNAs that may affect fetus growth and pregnancy outcomes. In female placentas, DELs and DEGs were associated mainly with the vasculature, while in male placentas, disturbed expression predominantly affected immune processes. View Full-Text
Keywords: FGR; placenta; RNA-seq; lncRNA; transcriptome FGR; placenta; RNA-seq; lncRNA; transcriptome
►▼ Show Figures 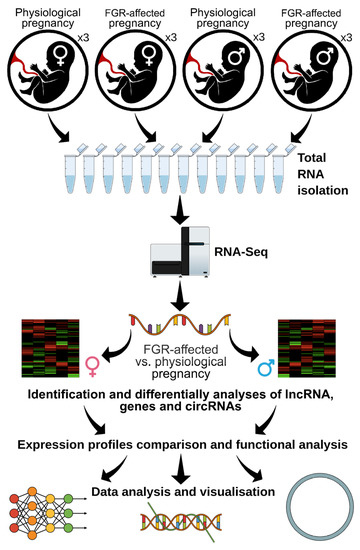