The Potentiation of Anti-Tumor Immunity by Tumor Abolition with Alpha Particles, Protons, or Carbon Ion Radiation and Its Enforcement by Combination with Immunoadjuvants or Inhibitors of Immune Suppressor Cells and Checkpoint Molecules

Regulated cell death (RCD) has always been considered a tolerogenic event. Immunogenic cell death (ICD) occurs as a consequence of tumour cell death accompanied by the release of damage-associated molecular patterns (DAMPs), triggering an immune response. ICD plays a major role in stimulating the function of the immune system in cancer during chemotherapy and radiotherapy. ICD can therefore represent one of the routes to boost anticancer immune responses. According to the recommendations of the Nomenclature Committee on Cell Death (2018), apoptosis (type I cell death) and necrosis (type II cell death) represent are not the only types of RCD, which also includes necroptosis, pyroptosis, ferroptosis and others. Specific downstream signalling molecules and death-inducing stimuli can regulate distinct forms of ICD, which develop and promote the immune cell response. Dying cells deliver different potential immunogenic signals, such as DAMPs, which are able to stimulate the immune system. The acute exposure of DAMPs can prime antitumour immunity by inducing activation of antigen-presenting cells (APC), such as dendritic cells (DC), leading to the downstream response by cytotoxic T cells and natural killer cells (NK). As ICD represents an important target to direct and develop new pharmacological interventions, the identification of bioactive natural products, which are endowed with low side effects, higher tolerability and preferentially inducing immunogenic programmed cell death, represents a priority in biomedical research. The ability of ICD to drive the immune response depends on two major factors, neither of which is intrinsic to cell death: ‘Antigenicity and adjuvanticity’. Indeed, the use of natural ICD-triggering molecules, alone or in combination with different (immuno)therapies, can result in higher efficacy and tolerability. Here, we focused on natural (marine) compounds, particularly on marine microalgae derived molecules such as exopolysaccharides, sulphated polysaccharides, glycopeptides, glycolipids, phospholipids, that are endowed with ICD-inducing properties and sulfavants. Here, we discuss novel and repurposed small-molecule ICD triggers, as well as their ability to target important molecular pathways including the IL-6, TNF-α and interferons (IFNs), leading to immune stimulation, which could be used alone or in combinatorial immunotherapeutic strategies in cancer prevention and therapies. View Full-Text
Keywords: immunogenic cell death; natural compounds; marine drugs; algae; prevention immunogenic cell death; natural compounds; marine drugs; algae; prevention
►▼ Show Figures 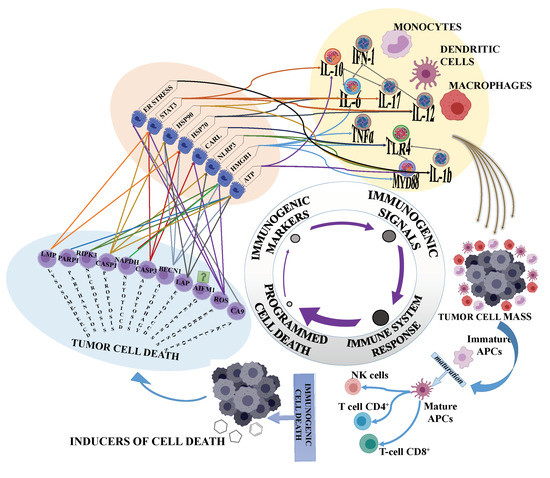