The Interplay of WNT and PPARγ Signaling in Vascular Calcification

Effect of Interventions in WNT Signaling on Healing of Cardiac Injury: A Systematic Review

The wound healing that follows myocardial infarction is a complex process involving multiple mechanisms, such as inflammation, angiogenesis and fibrosis. In the last two decades, the involvement of WNT signaling has been extensively studied and effects on virtually all aspects of this wound healing have been reported. However, as often is the case in a newly emerging field, inconsistent and sometimes even contradictory findings have been reported. The aim of this systematic review is to provide a comprehensive overview of studies in which the effect of interventions in WNT signaling were investigated in in vivo models of cardiac injury. To this end, we used different search engines to perform a systematic search of the literature using the key words “WNT and myocardial and infarction”. We categorized the interventions according to their place in the WNT signaling pathway (ligand, receptor, destruction complex or nuclear level). The most consistent improvements of the wound healing response were observed in studies in which the acylation of WNT proteins was inhibited by administering porcupine inhibitors, by inhibiting of the downstream glycogen synthase kinase-3β (GSK3β) and by intervening in the β-catenin-mediated gene transcription. Interestingly, in several of these studies, evidence was presented for activation of cardiomyocyte proliferation around the infarct area. These findings indicate that inhibition of WNT signaling can play a valuable role in the repair of cardiac injury, thereby improving cardiac function and preventing the development of heart failure. View Full-Text
Keywords: WNT signaling; myocardial infarction; infarct healing; in vivo; systematic review WNT signaling; myocardial infarction; infarct healing; in vivo; systematic review
►▼ Show Figures 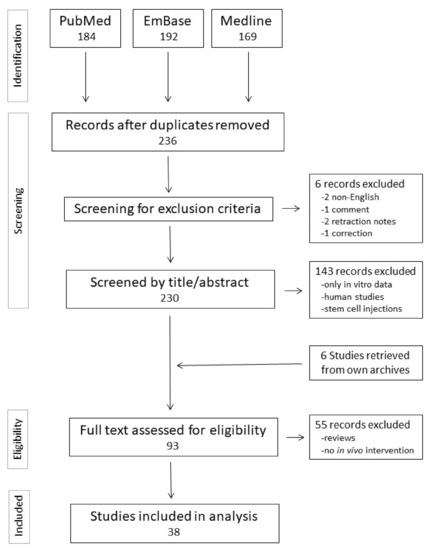