COVID-19: Characteristics and Therapeutics
Next Article in Special Issue

Endogenous Mechanisms of Neuroprotection: To Boost or Not to Be
Previous Article in Journal

Alzheimer′s disease (AD) is the most common age-related neurodegenerative disorder in which learning, memory and cognitive functions decline progressively. Familial forms of AD (FAD) are caused by mutations in amyloid precursor protein (APP), presenilin 1 (PSEN1) and presenilin 2 (PSEN2) genes. Presenilin 1 (PS1) and its homologue, presenilin 2 (PS2), represent, alternatively, the catalytic core of the γ-secretase complex that, by cleaving APP, produces neurotoxic amyloid beta (Aβ) peptides responsible for one of the histopathological hallmarks in AD brains, the amyloid plaques. Recently, PSEN1 FAD mutations have been associated with a loss-of-function phenotype. To investigate whether this finding can also be extended to PSEN2 FAD mutations, we studied two processes known to be modulated by PS2 and altered by FAD mutations: Ca2+ signaling and mitochondrial function. By exploiting neurons derived from a PSEN2 knock-out (PS2–/–) mouse model, we found that, upon IP3-generating stimulation, cytosolic Ca2+ handling is not altered, compared to wild-type cells, while mitochondrial Ca2+ uptake is strongly compromised. Accordingly, PS2–/– neurons show a marked reduction in endoplasmic reticulum–mitochondria apposition and a slight alteration in mitochondrial respiration, whereas mitochondrial membrane potential, and organelle morphology and number appear unchanged. Thus, although some alterations in mitochondrial function appear to be shared between PS2–/– and FAD-PS2-expressing neurons, the mechanisms leading to these defects are quite distinct between the two models. Taken together, our data appear to be difficult to reconcile with the proposal that FAD-PS2 mutants are loss-of-function, whereas the concept that PS2 plays a key role in sustaining mitochondrial function is here confirmed. View Full-Text
Keywords: Alzheimer′s disease; presenilin 2; PS2–/–; Ca2+ signaling; mitochondria; bioenergetics; mitochondrial membrane potential; oxygen consumption rate; neuronal hyperexcitability Alzheimer′s disease; presenilin 2; PS2–/–; Ca2+ signaling; mitochondria; bioenergetics; mitochondrial membrane potential; oxygen consumption rate; neuronal hyperexcitability
►▼ Show Figures 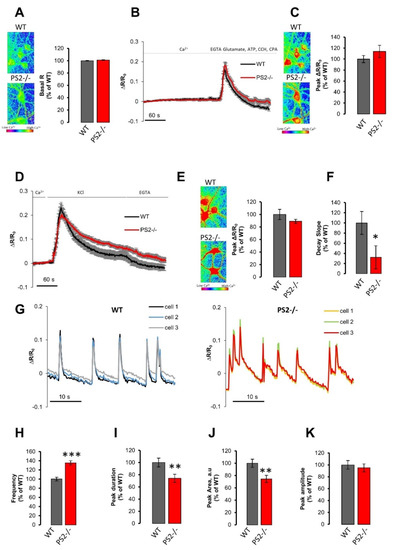