In Vitro Evaluation of CD276-CAR NK-92 Functionality, Migration and Invasion Potential in the Presence of Immune Inhibitory Factors of the Tumor Microenvironment

Severe acute respiratory syndrome caused by coronavirus 2 emerged in Wuhan (China) in December 2019 and has severely challenged the human population. NK and T cells are involved in the progression of COVID-19 infection through the ability of NK cells to modulate T-cell responses, and by the stimulation of cytokine release. No detailed investigation of the NK cell landscape in clinical SARS-CoV-2 infection has yet been reported. A total of 35 COVID-19 hospitalised patients were stratified for clinical severity and 17 healthy subjects were enrolled. NK cell subsets and T cell subsets were analysed with flow cytometry. Serum cytokines were detected with a bead-based multiplex assay. Fewer CD56dimCD16brightNKG2A+NK cells and a parallel increase in the CD56+CD69+NK, CD56+PD-1+NK, CD56+NKp44+NK subset were reported in COVID-19 than HC. A significantly higher adaptive/memory-like NK cell frequency in patients with severe disease than in those with mild and moderate phenotypes were reported. Moreover, adaptive/memory-like NK cell frequencies were significantly higher in patients who died than in survivors. Severe COVID-19 patients showed higher serum concentrations of IL-6 than mild and control groups. Direct correlation emerged for IL-6 and adaptive/memory-like NK. All these findings provide new insights into the immune response of patients with COVID-19. In particular, they demonstrate activation of NK through overexpression of CD69 and CD25 and show that PD-1 inhibitory signalling maintains an exhausted phenotype in NK cells. These results suggest that adaptive/memory-like NK cells could be the basis of promising targeted therapy for future viral infections.
Keywords: NK cells; T cells; immunology; lung transplant; cytomegalovirus NK cells; T cells; immunology; lung transplant; cytomegalovirus

Severe acute respiratory syndrome caused by coronavirus 2 (SARS-CoV-2) emerged in Wuhan (China) in December 2019 [1] and has severely challenged the human population [2]. Patients with COVID-19 show various clinical patterns, ranging from mild to severe forms, the latter characterised by acute respiratory distress syndrome (ARDS), multi-organ failure and high risk of death [3]. Immune dysregulation and hyperactivation caused by the infection, in particular overproduction of cytokines known as the “cytokine storm”, leading to systemic hyper-inflammatory status, were extensively studied [4,5,6,7,8]. Although several studies have investigated the role of cytokines and related cell-mediated responses, little data is yet available on the role of innate immunity and its possible contribution to host responses and disease progression.
NK cells are large granular lymphocytes, considered as the cells of the innate immune system with cytolytic activity against different targets such as tumour-derived or virus-infected cells [7]. These cells release granules that contain different acid hydrolases, such as acid phosphatase, naphthyl acetate-esterase and glucuronidase [8].
Specific aspects of NK cell biology, such as maturation, diversity and adaptive capacity, have become much clearer in the last few years [9], supporting their crucial role in first-line defence against viral infections and cancer [10,11,12,13,14]. NK cells are typically classified into cytokine-producing CD56bright NK cells and cytotoxic CD56dim NK cells [11]. These cells are activated when their target cells do not express MHC-I molecules. In the last year, activating receptors, including NKG2C, NKG2D and DNAM-1, and natural cytotoxicity receptors, including NKp30, NKp44 and NKp46, were characterised [15,16,17,18,19,20,21]. Other receptors, including killer Ig-like receptors (KIRs) and the CD94:NKG2A heterodimer, as well as immune checkpoints, such as PD-1, express inhibition [13]. NK cells not only have the capacity to directly target and kill infected cells but can also influence adaptive T-cell responses [18,19]. The ability of NK cells to modulate T-cell responses can be mediated through direct T–NK interactions, cytokine production, or indirectly through dendritic cells and other cell types [18].
No detailed investigation of the NK cell landscape in clinical SARS-CoV-2 infection has yet been reported. Like T and B cells, NK cells appear to be fewer in number in patients developing severe COVID-19 and to overexpress NKG2A inhibitory receptor and PD-1 on the cell surface [22,23,24,25]. The aim of the present study was to clarify the role of NK cell and T cell subsets during SARS-CoV-2 infection in hospitalised patients with COVID-19, in an endeavour to discover potential relationships within the severity of the disease.

Thirty-five patients hospitalised with COVID-19, confirmed by SARS-CoV-2 RNA-positive nasopharyngeal swab and seventeen healthy sex- and age-matched controls were enrolled in the study. Demographic and clinical data and radiological and immunological features, as well as serum concentrations of inflammatory biomarkers, were entered in a pre-specified electronic database. The study population was stratified into three subgroups (mild, moderate and severe) according to COVID-19 severity. The mild subgroup required pharmacological treatment and only low-flow oxygen therapy; the moderate subgroup needed high-flow oxygen therapy and/or non-invasive mechanical ventilation; severe patients were admitted to intensive care and underwent mechanical ventilation with orotracheal intubation. A key inclusion criterion for the study population was documentation of monolateral or bilateral pneumonia by chest X-ray or high resolution computed tomography (HRCT).
Blood samples for immunological studies were collected within 24–48 h of emergency room admission and before administration of any antiviral agents, steroids and/or immunosuppressants. Serum aliquots and peripheral blood were stored at −80 °C until assay.
All patients gave their written informed consent to the study that was approved by our local ethics committee (BIOBANCA-MIU-2010. MARKERLUNG 17431).

2.2. Preparation and Storage of PBMCs

Cytofluorimetric analysis was performed at Siena University respiratory diseases laboratory in the period April 2020 to April 2021. Briefly, the peripheral blood samples were collected and processed within 8 h Ficoll density gradient separation was performed through Ficoll Histopaque®-1077 (Sigma-Aldrich, Burlington, MA, USA) as previously reported Live cell counts were performed in a Burker chamber. Aliquots of 3 × 106 cells were stored in liquid nitrogen in a standardised manner as previously reported [26,27,28,29,30]. All experiments were performed after thawing under the same conditions.

The results were expressed as means and standard deviations (SD) or medians and quartiles (25th and 75th percentiles) for continuous variables, as appropriate. One-way ANOVA nonparametric test (Kruskal–Wallis test) and Dunn test were used for multiple comparisons, while the Mann–Whitney U test was used for two-group comparisons. The Chi-squared test was used for categorical variables. Sensitivity and specificity by ROC curve were used to describe accuracy for the different cell subsets. The Youden index (J = max (sensitivity+specificity-1)) was used to establish the best cut-offs. The Spearman test was used to look for correlations between immunological and clinical data. A p-value less than 0.05 was considered statistically significant. Statistical analysis and graphic representation of the data were performed by GraphPad Prism 9.0 software.
Principal Components Analysis with heatmap was performed using BioVinci software (BioTuring Inc., San Diego, CA, USA). PCA was used to reduce the dimensionality of the data hyperspace and Hierarchical Heatmaps was used for sample clustering based on cell composition. The cell subsets of patients were used to create a decision tree model to determine the best clustering variables according to the Gini criterion.

Demographic data, blood cell count, clinical data, radiological features and immunological findings are reported in Table 1. There was a prevalence of males in the groups of patients (28/35).
Regarding clinical status. 85% of patients showed at least two symptoms at onset. fever being the most common (86%). Only four patients (12.5%) did not have a history of any medical or surgical comorbidity.
Regarding blood parameters, neutrophil and lymphocyte counts were significantly lower in severe COVID-19 patients than in the other groups (p = 0.002 and p = 0.03. respectively), whereas CRP was significantly higher in severe patients than in the other severity groups (p = 0.012).

4.2. Differences in NK and T Cells in Hospitalised Patients with COVID-19 and Controls

4.3. Differences in NK and T Cells in Mild. Moderate and Severe Hospitalised Patients with COVID-19

4.4. Differences in NK and T Cells in Hospitalised Patients in Relation to Death and Survival

The present study was unfunded.

The study was conducted according to the guidelines of the Declaration of Helsinki, and approved by the Institutional Review Board of CEAVSE (BIOBANCA-MIU-2010. MARKERLUNG 17431). 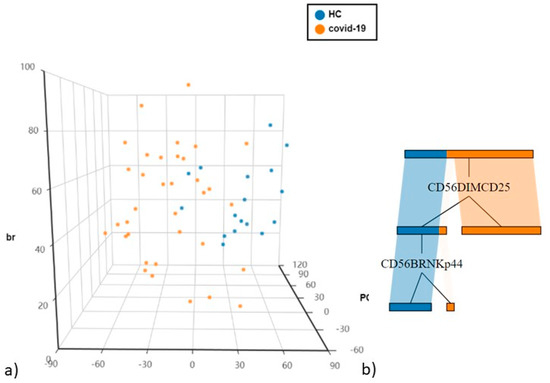 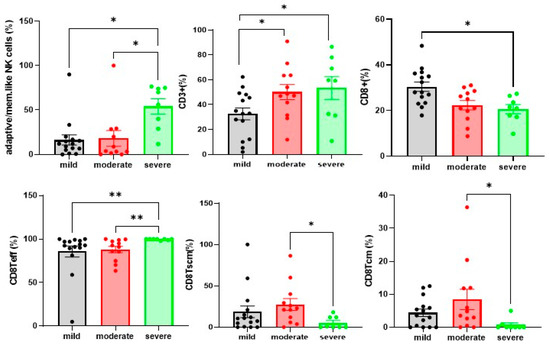 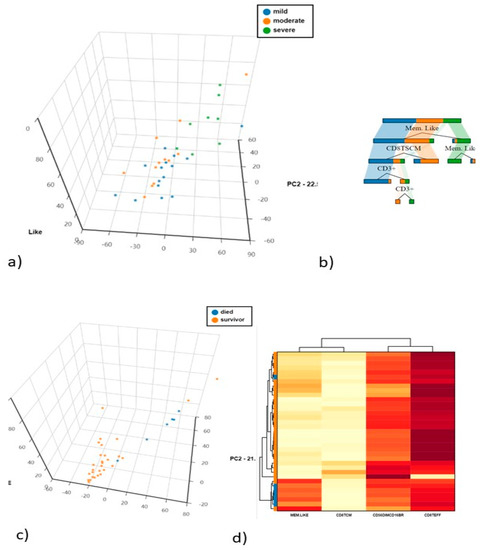 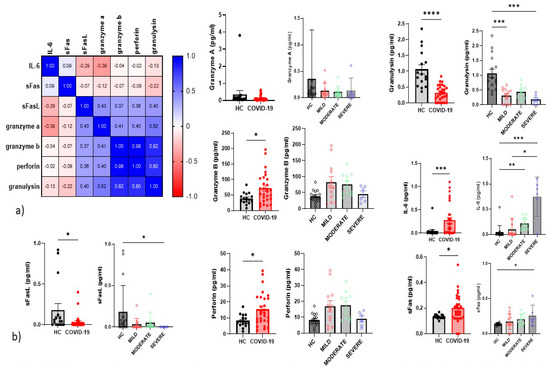