Due to the rapid decrease of Pinna nobilis populations during the previous decades, this bivalve species, endemic in the Mediterranean Sea, is characterized as ‘critically endangered’. In addition to human pressures, various pathogen infections have resulted in extended reduction, even population extinction. While Haplosporidium pinnae is characterized as one of the major causative agents, mass mortalities have also been attributed to Mycobacterium sp. and Vibrio spp. Due to limited knowledge concerning the physiological response of infected P. nobilis specimens against various pathogens, this study’s aim was to investigate to pathophysiological response of P. nobilis individuals, originating from mortality events in the Thermaikos Gulf and Lesvos and Limnos islands (Greece), and their correlation to different potential pathogens detected in the diseased animals. In isolated tissues, several cellular stress indicators of the heat shock and immune response, apoptosis and autophagy, were examined. Despite the complexity and limitations in the study of P. nobilis mortality events, the present investigation demonstrates the cumulative negative effect of co-infection additionally with H. pinnae in comparison to the non-presence of haplosporidian parasite. In addition, impacts of global climate change affecting physiological performance and immune responses result in more vulnerable populations in infectious diseases, a phenomenon which may intensify in the future. View Full-Text
Keywords: Pinna nobilis; mortality; pathogens; Haplosporidium pinnae; Mycobacterium sp.; Vibrio spp.; physiology; autophagy; cellular death; inflammation Pinna nobilis; mortality; pathogens; Haplosporidium pinnae; Mycobacterium sp.; Vibrio spp.; physiology; autophagy; cellular death; inflammation
►▼ Show Figures 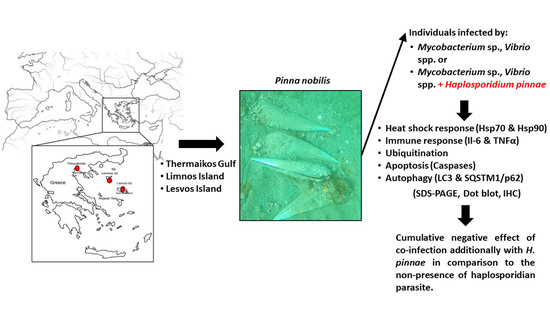