Viroids, and the Legacy of Ricardo Flores (1947–2020)
Previous Article in Journal

The primary objective of this study is to detect biomarkers and develop models that enable the identification of clinically significant prostate cancer and to understand the biologic implications of the genes involved. Peripheral blood samples (1018 patients) were split chronologically into independent training (n = 713) and validation (n = 305) sets. Whole transcriptome RNA sequencing was performed on isolated phagocytic CD14+ and non-phagocytic CD2+ cells and their gene expression levels were used to develop predictive models that correlate to adverse pathologic features. The immune-transcriptomic model with the highest performance for predicting adverse pathology, based on a subtraction of the log-transformed expression signals of the two cell types, displayed an area under the curve (AUC) of the receiver operating characteristic of 0.70. The addition of biomarkers in combination with traditional clinical risk factors (age, serum prostate-specific antigen (PSA), PSA density, race, digital rectal examination (DRE), and family history) enhanced the AUC to 0.91 and 0.83 for the training and validation sets, respectively. The markers identified by this approach uncovered specific pathway associations relevant to (prostate) cancer biology. Increased phagocytic activity in conjunction with cancer-associated (mis-)regulation is also represented by these markers. Differential gene expression of circulating immune cells gives insight into the cellular immune response to early tumor development and immune surveillance.
Keywords: cancer; immune; cells; transcriptomics; phagocytosis; CD14+; CD2+; gradient; boosting cancer; immune; cells; transcriptomics; phagocytosis; CD14+; CD2+; gradient; boosting

Immune cell gene expression changes in response to different conditions or stimuli such as infection, ageing, and diseases, including cancer, have revealed relevant new pathways and co-expression networks [1,2,3,4]. Efficient next-generation RNA sequencing platforms have facilitated the ability to perform whole genome expression profiling of individual populations of immune cells [5,6,7,8] as a novel means of searching for patterns of gene expression to aid in the identification of meaningful signals of various disease states. For example, whole-blood RNA expression has been studied in castration resistant prostate cancer (PCa) by various methods with good results predicting survival as well as suggesting dysregulation of the immune system [9,10,11]. Recent interest in expression profiles of particular leukocyte subsets suggests that diagnostic information for many disorders may be contained therein [12,13,14,15,16,17,18,19,20,21]. Mononuclear phagocytic cells including the various CD14+ subsets have been studied extensively in various disease states including some solid tumors, i.e., lung and pancreas [22,23,24]. This study aims to determine if the differential transcriptomic profiles of CD14+ and CD2+ cell populations are associated with features of adverse pathology in early stage, clinically localized prostate cancer.
Prostate cancer is a relatively slow growing, heterogenous, oligoclonal epithelial malignancy that commonly affects the prostate of men as a result of germline genetic predispositions [25], accumulation of mutations of oncogenes and tumor suppression genes [26,27] and aberrant epigenetic events, as well as immune-evasion [28], and cancer immunoediting [29]. Currently, it is hypothesized that cancer immunoediting occurs in three phases [30]. First, during the elimination phase, tumor cells are killed by natural killer (NK), and CD4+ and CD8+ T-lymphocytes [31]. During the second, equilibrium phase tumor cells that have not been eliminated and that do not elicit an immunogenic response are perpetuated, while (epi)genetic defects progressively accumulate and clonal selection occurs [32]. Finally, the escape phase sets in, during which the immune system is unable to destroy the tumor cells which can grow and expand in an uncontrolled manner, resulting in the appearance of clinically detectable tumors. During these three phases the immune cells are hypothesized to alter their (epi)genomic profile in response to the increasing stress on the immune system that occurs while trying to maintain control of a developing tumor [32]. These changes can be studied in isolated, purified immune cell subpopulations, or by single cell sequencing.
Phagocytosis is one of the main mechanisms of innate immune defense. Macrophages initiate phagocytosis by various receptors (mannose receptors, scavenger receptors, Fc γ receptors, and complement receptors 1, 3, and 4). Macrophages are long-lived and can continue phagocytosis by forming new lysosomes [33,34]. In this paper, we use whole transcriptome sequencing analysis to study how phagocytosis of apoptotic tumor cells affects the transcriptome of macrophages. From each patient, the transcriptome of the CD2+ lymphocytic cells is also sequenced, both as a source of signals of the body’s lymphocytic response to the presence of a developing tumor, but also as a patient-specific white blood cell control for the phagocytic macrophages that potentially possess cancer-specific signals when cleaning up apoptotic tumor cells. To this end, the RNA expression of the CD14+ phagocytic cells in the peripheral blood is normalized for non-phagocytic CD2+ cell expression capturing both aspects of the immune response at the same time. Therefore, it is hypothesized that this CD2-normalized CD14 signal could serve as a valuable metric in predicting features for the presence of aggressive, clinically significant cancer. Relevant gene sets that are differentially expressed between these two cell types of the same patient are thus used to develop models predicting the presence of adverse pathologic features. Pathway and ontology analyses are then used to provide biological insights into the cooperative nature of the two cell types with respect to transcriptomic activation in response to tumor presence. This approach might also be valuable to investigate therapeutic response and minimal residual disease [35].
Prostate cancer was selected as a model system to study this hypothesis due to the high prevalence in the population of early stage, clinically localized tumors that would be available for study. Early-stage prostate cancer can be divided into indolent tumors that are watched by active surveillance versus tumors demonstrating aggressive pathologic features that require early intervention to prevent metastasis and mortality [36,37]. This transition from indolent to aggressive tumor corresponds to the point of escape from the immune system where the transcriptomic immune response signal is likely to be maximal.

The immune-transcriptomic profiling of purified populations of CD14+ monocytes and CD2+ lymphocytes by next-generation RNA sequencing provides a unique look into the pathways that are up or down regulated in patients with aggressive prostate cancer as defined by adverse pathologic features compared to biopsy negative controls and men with indolent pathologic disease. Since historic data sets with purified populations of immune cells are not available, adverse pathologic features were used a surrogate endpoint. These findings will need to be validated on clinically significant outcomes data once this data set matures and sufficient number of definitive events have occurred (metastasis and mortality). The specific genes in these pathways can be used in models predicting adverse prostate cancer pathology. Understanding the underlying biological phenomena and the cell types involved in this immunologic response to cancer provides insights, not only into the biologic pathways involved in the immune response to cancer, but also into potential novel biomarker strategies to manage cancer. It also demonstrates the systemic nature of the response that can be accessed via examining particular subpopulations of circulating immune cells.
Two distinct immunologic responses to early-stage prostate cancer are focused upon, the phagocytic and the immune response mechanisms, each harboring specific involvement in their response to an ongoing oncogenic process. Exploring this response as a ratio between these two cell type populations provides more information than exploring an individual cell type alone. This is likely due to the normalization effect (noise reduction) that using the ratio has on setting the baseline overall activity state of the immune system and showing the upregulation of multiple pathways including phagocytic and cancer pathways.
Future insights can be gained by looking at single cell RNA sequencing data to better understand the subsets of cells involved and how the proportions of these cell types shift with the development of cancer that escapes the immune surveillance system. This may allow for the deconvolution of bulk sequencing data on populations of circulating immune cells that are sequenced.
The gene sets and associated pathways uncovered by examining differential gene expression of circulating immune cells in the setting of early-stage prostate cancer highlights two different response mechanisms to early tumor development: (a) the tumor phagocytosis and (b) immune response mechanisms. Eventually, the genes associated with clinically significant cancer may also lead to identification of novel immune modulation therapeutic targets as well as markers for the development of prognostic and diagnostic models.
In conclusion, the novel clinico-immuno-genomic blood cell based approach utilizing gradient boosting described here demonstrates that (i) concurrent CD14+/CD2+ sequencing from the same patient is required to (a) filter out genomic signatures not associated with the disease, (b) achieve strong concordance with tissue biopsy testing results, and (c) substantially enhance the AUCs obtained from various current PCa clinical risk factors only, and (ii) the differential transcriptomic profiles of CD14+ and CD2+ cell populations are associated with and can predict adverse pathologic features of clinically localized prostate cancer. The performance of this strategy appears maximal in the peak years of prostate cancer detection. These results confirm the power of this novel technology, and further development should eventually aid in the management of PCa patients.

This research was funded by Immunis.AI, Inc. (Glendale, CA, USA).

The study was conducted according to the guidelines of the Declaration of Helsinki, and approved by the Western Institutional Review Board (protocol code WIRB # 20130028 and date of approval 7/5/2014).

The RNA sequencing count data and adverse pathology endpoint presented in this study will be openly available in FigShare at: dx.doi.org/10.6084/m9.figshare.16602191. 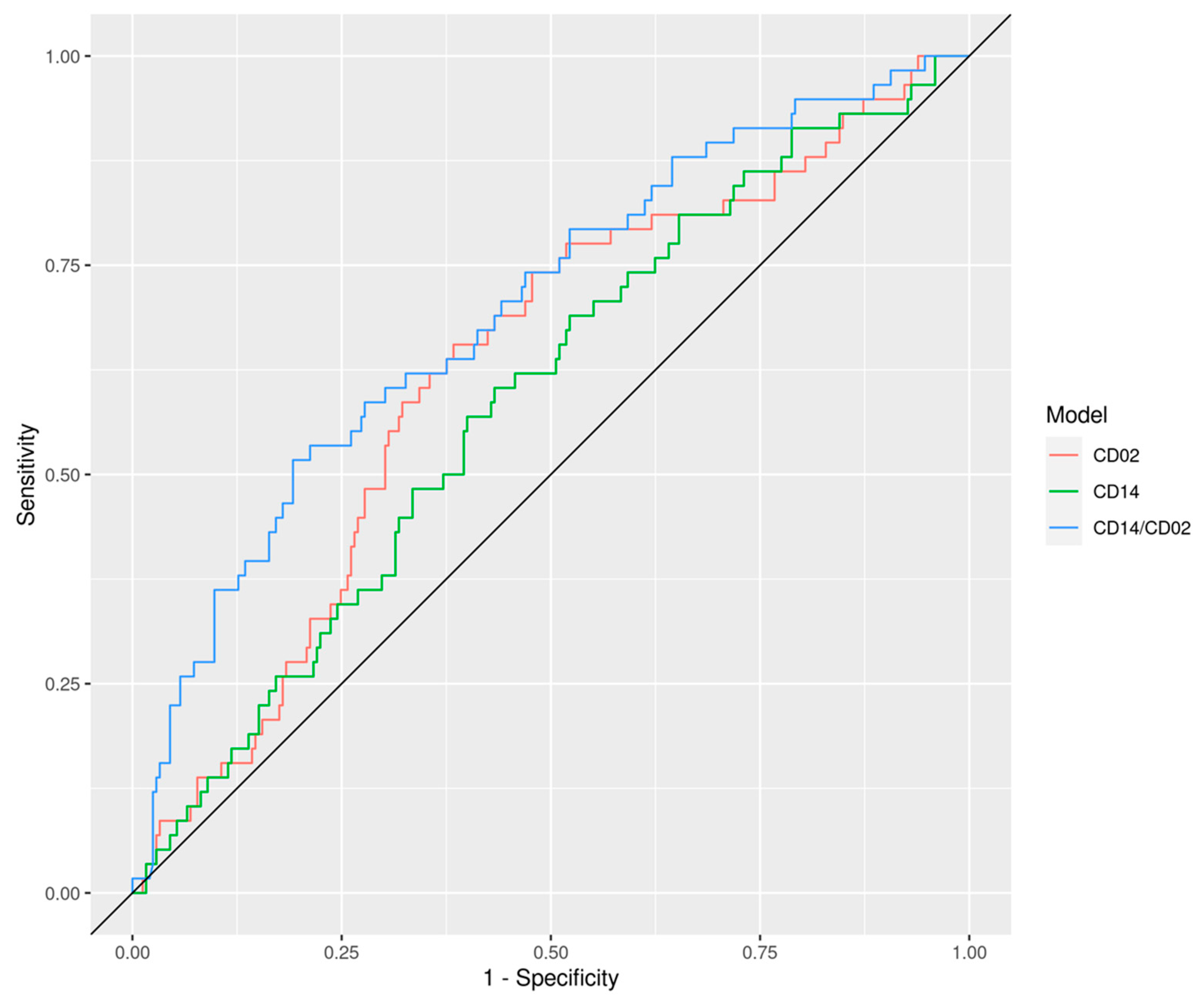