Raspberry is a valuable berry crop containing a large amount of antioxidants that correlates with the color of the berries. We evaluated the genetic diversity of differently colored raspberry cultivars by the microsatellite markers developed using the flavonoid biosynthesis structural and regulatory genes. Among nine tested markers, seven were polymorphic. In total, 26 alleles were found at seven loci in 19 red (Rubus idaeus L.) and two black (R. occidentalis L.) raspberry cultivars. The most polymorphic marker was RiMY01 located in the MYB10 transcription factor intron region. Its polymorphic information content (PIC) equalled 0.82. The RiG001 marker that previously failed to amplify in blackberry also failed in black raspberry. The raspberry cultivar clustering in the UPGMA dendrogram was unrelated to geographical and genetic origin, but significantly correlated with the color of berries. The black raspberry cultivars had a higher homozygosity and clustered separately from other cultivars, while at the same time they differed from each other. In addition, some of the raspberry cultivars with a yellow-orange color of berries formed a separate cluster. This suggests that there may be not a single genetic mechanism for the formation of yellow-orange berries. The data obtained can be used prospectively in future breeding programs to improve the nutritional qualities of raspberry fruits. View Full-Text
Keywords: flavonoid biosynthesis; fruit coloration; marker-assisted selection; microsatellites; Rubus flavonoid biosynthesis; fruit coloration; marker-assisted selection; microsatellites; Rubus
►▼ Show Figures 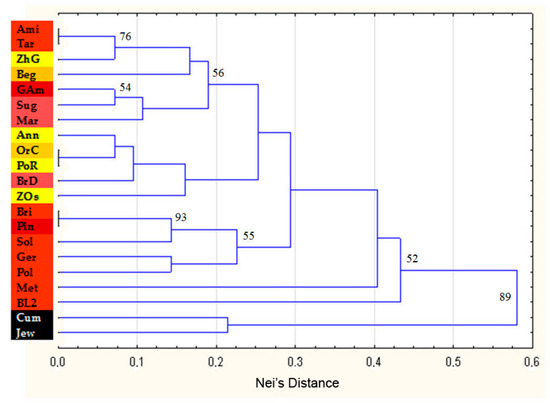