Sisymbrium officinale is a wild Brassicaceae species that is known for its use in the alleviation of vocal inflammatory states. Since this species is particularly rich in bioactive compounds, there is an interest for developing cultivation protocols to use this plant as a leafy vegetable harvested at the 13th BBCH growth stage. Two wild populations of S. officinale (L.) Scop., denominate MI (Milan) and BG (Bergamo), have been used, and three different levels of nutrients (g/m2) have been provided such as 13 N, 7 P2O5, 8 K2O (100%); 9 N, 5 P2O5, 5.5 K2O (70%); and 6.5 N, 3.5 P2O5, 4.0 K2O (50%). The effects of different fertilization levels were evaluated on the yield, leaf pigments (chlorophylls, carotenoids), nitrate concentration, sugars content, and on the antioxidant compounds such as anthocyanins, total phenols and glucosinolates (GLS). Plant stress monitoring was performed by measuring the chlorophyll a fluorescence. Results indicated that yield was not affected and ranged from 0.18 to 0.47 kg/m2, and differences were not statistically significant for chlorophylls, carotenoids, and total sugars content. Nitrate concentrations were higher in the BG wild population (4388.65 mg/kg FW) during the second cultivation cycle and lower (1947.21 mg/kg FW) in the same wild population during the first cultivation cycle, both at the 100% fertilization level. Total phenols and anthocyanins were higher in the highest fertilization rate in the MI wild population during the second cycle. The GLS were higher in the lowest fertilization rate in the BG wild population (19 µmol/g FW) grown at the fertilization level of the 50%, and significant differences were observed in the second cycle. In conclusion, the 50% fertilization level can be considered the most suitable for our experimental conditions.
Keywords: baby leaf; NPK fertilization; nitrate; Sisymbrium officinale; wild species; glucosinolates baby leaf; NPK fertilization; nitrate; Sisymbrium officinale; wild species; glucosinolates

Two wild populations of Sisymbrium officinale (L.) Scop. named MI (Milan) and BG (Bergamo), obtained from a controlled seed reproduction at Fondazione Minoprio (Como, Italy) during summer in 2017, were grown under controlled conditions in a greenhouse at the Faculty of Agricultural and Food Science of the University of Milan (45°28′33.2″ N, 9°13′38.6″ E) (Figure S1)
The seeds of the two wild populations were sown twice, 23 January 2018 for the first cultivation cycle and 2 March 2018 for the second cycle. Sowing was performed in polystyrene panels using common horticultural fertilized substrate, keeping the two wild populations separated.
Plantlets were transplanted and grown using complete substrate (Vigorplant Italia Srl, Fombio (LO), Italy) for horticultural cultivation (containing the following components: 21% Baltic peat, 22% dark peat, 26% Irish peat, 13% volcanic peat, 18% calibrated peat) with pH 6.5 in 14 cm diameter plastic pots of 2 L volume. The transplant was performed the 15th March 2018 for the first cycle and the 16th May for the second cultivation cycle using 18 plantlets each from the MI and BG wild populations (Table S1).
Plants were supplied with three different levels of NPK granular fertilizer (14:7:17) in both experimental periods and were watered every day, keeping the optimal water conditions.
In the definition of the different levels of fertilization, rapeseed (Brassica napus L.) was used as plant model. Six plants of each wild population were fertilized with 4 g/pot (level 100%), six plants were fertilized with 2.8 g/pot (level 70%), and the last six plants were fertilized with 2 g/pot (level 50%) (Table S2).
The amount of fertilizers corresponds to:
−100% = 13 g/m2 N; 7 g/m2 P2O5; 8 g/m2 K2O
−70% = 9 g/m2 N; 5 g/m2 P2O5; 5.5 g/m2 K2O
−70% = 9 g/m2 N; 5 g/m2 P2O5; 5.5 g/m2 K2O
−50% = 6.5 g/m2 N; 3.5 g/m2 P2O5, 4.0 g/m2 K2O
Harvest was performed at the 13 BBCH (Biologische Bundesanstalt, Bundessortenamt and Chemical insustry) growth stage for each cultivation cycle, on 14 May 2018 for the first cultivation cycle and on 26 June 2018 for the second cycle. Sampling was randomized—plants were casually chosen from each pot.
The fresh and dry biomass of the two wild populations of S. officinale were measured to evaluate the total production of leaves. Finally, carotenoids, phenols, anthocyanins, nitrate and total sugars, commonly used to define quality parameters in leafy vegetables, were measured.

A non-destructive analysis was carried out on leaf tissue for the agronomic characterization of two S. officinale wild populations at the end of cultivation cycle. Chlorophyll a fluorescence was measured using a portable fluorometer (Handy PEA, Hansatech Instruments Ltd, Kings Lynn, UK). Leaves were dark-adapted using leaf clips; after 30 min, a rapid pulse of high-intensity light of 3000 µmol m−2 s−1 (600 W m−2) was applied to the leaf, thus inducing fluorescence.
Fluorescence parameters were calculated automatically by the used device, such as Fv/Fm, the variable fluorescence to maximum fluorescence. Starting from these parameters, JIP analyses was performed to determine the following indexes: Performance index (PI); the dissipation of energy per cross-section (DIo/RC), and the density of reaction center at the P stage (RC/CSm).

For the evaluation of qualitative characteristic of the two wild hedge mustard populations (MI and BG) related to the three different fertilization levels, about 1 g of fresh leaves for each sample was collected at the end of each cultivation cycle. To prevent leaf tissue’s degradation, each sample was conserved at −20 °C after the collection.
Plant fresh matter (FM) and dry matter (DM) were measured at the end of each cultivation cycle—in the middle of May for the first cycle and at the end of June for the second cycle—in order to evaluate the yield.

The Phenolic Index in leaf tissue was determined spectrophotometrically by the direct measurement of the leaf extract absorbance at 320 nm. About 20–30 mg of fresh leaf tissue (disk of 5 mm diameter) was weighed, and 3 mL methanolic HCl (1%) were added. After overnight incubation, the supernatant was read at 320 nm. The values were expressed as mg/100 g FM.
Anthocyanin content was determined spectrophotometrically. Samples of 20–30 mg of fresh leaf (disks of 5 mm diameter) were extracted using 3 mL of methanolic HCl (1%). Samples were incubated overnight at 4 °C in darkness. The concentration of cyanidin-3-glucoside equivalents was determined spectrophotometrically at 535 nm using an extinction coefficient (ε) of 29,600 [29].

Nitrate concentration was measured by the salicyl sulfuric acid method [30]. Samples for nitrate were collected once at the end of each cultivation cycle when plants reached the 13 BBCH growth stage.
About 1 g of fresh leaves was ground in 5 mL of distilled water. The extracts were centrifuged at 4000 rpm for 15 min. After centrifugation, the supernatant was collected for colorimetric determinations. Twenty µL of samples were collected, and 80 µL (5% w/v) of salicylic acid in concentrated sulfuric acid and 3 mL of NaOH 1.5 N were added to them. Each sample was cooled, and absorbance was measured at 410 nm. Nitrate concentration was calculated by referring to the KNO3 standard calibration curve.

Samples for total sugar analyses were collected twice during the experiment, as explained for the nitrate samples. To determinate total sugar levels in S. officinale fresh leaves, extracts were prepared as explained for the determination of nitrate levels.
Total sugars were determined according the anthrone’s assay with a slight modification [31]. The reagent (anthrone) was prepared using 0.1 g of anthrone dissolved in 50 mL of 95% H2SO4, and it was left 40 min before use. After this period, 200 µL of extract were added to 1 mL of anthrone, put in ice for 5 min, and vortexed. Samples was heated at 95 °C for making the reaction. After 5 min of incubation, samples were cooled, and absorbance was performed at 620 nm. Total sugar concentration was calculated by referring to the glucose standard calibration curve.

Samples for the evaluation of glucosinolate content were collected at the end of each cultivation cycle. GLS content was obtained from the fresh leaves of two wild populations of S. officinale following the method described by the French pharmacopeia, with slightly differences [32]. GLS content was estimated spectrophotometrically according to Mawlong [33]. Three mL of 2 mM sodium tetrachloropalladate (obtained with 58.8 mg Sodium tetrachloropalladate, 170 μL concentrated HCl, and 100 mL double distilled water) and 0.3 mL of distilled water were added to 100 μL of extract. One hour of incubation was necessary to allow the formation of a complex among GLS and the palladate reagent, which led to a shift from light brown to dark, depending upon the GLS concentration.
After this period, absorbance was measured at 425 nm, and a calibration curve was determined by referring to six standards of sinigrin with concentrations ranging from 0.50 to 2.00 mM. The total GSL content was expressed as µmol/g of fresh material (FM).

Sisymbrium officinale is a medicinal plant that belongs to the Brassicaceae family, common in the Euroasiatic area as a wild species. The results of our study suggest that S. officinale can be cultivated as a leafy vegetable at the 13th BBCH growth stage. These results also suggest that the use of lower fertilization can enhance some important quality compounds, such as pigments and total sugars and, at the same time, can reduce nitrate content. Results suggest that the best fertilization treatment under the experimental conditions was the 50% fertilization level. Between the two wild populations, significant differences in qualitative and quantitative parameters were observed, and, for that reason, further investigations, such as genotypic characterization, could be desirable.

This research was funded by Fondazione Cariplo, ERISIMO A MILANO project, no. 2017-1653. 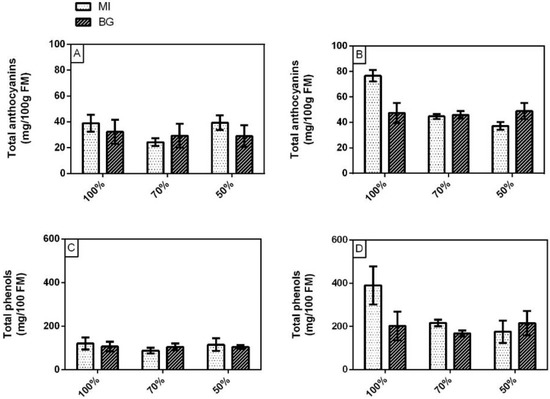 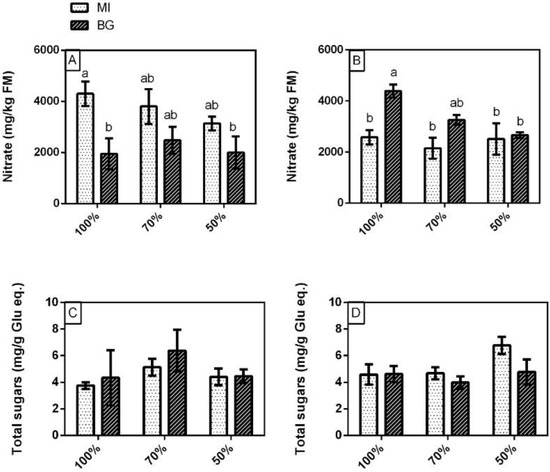