Drought stress retards wheat plant’s vegetative growth and physiological processes and results in low productivity. A stressed plant synthesizes ethylene which inhibits root elongation; however, the enzyme 1-Aminocyclopropane-1-Carboxylate (ACC) deaminase catabolizes ethylene produced under water stress. Therefore, the ACC deaminase producing plant growth promoting rhizobacteria (PGPR) can be used to enhance crop productivity under drought stress. Biochar (BC) is an organically active and potentially nutrient-rich amendment that, when applied to the soil, can increase pore volume, cation exchange capacity and nutrient retention and bioavailability. We conducted a field experiment to study the effect of drought tolerant, ACC deaminase producing PGPR (with and without timber waste BC) on plant growth and yield parameters under drought stress. Two PGPR strains, Agrobacterium fabrum or Bacillus amyloliquefaciens were applied individually and in combination with 30 Mg ha−1 BC under three levels of irrigation, i.e., recommended four irrigations (4I), three irrigations (3I) and two irrigations (2I). Combined application of B. amyloliquefaciens and 30 Mg ha−1 BC under 3I, significantly increased growth and yield traits of wheat: grain yield (36%), straw yield (50%), biological yield (40%). The same soil application under 2I resulted in greater increases in several of the growth and yield traits: grain yield (77%), straw yield (75%), above- and below-ground biomasses (77%), as compared to control; however, no significant increases in chlorophyll a, b or total, and photosynthetic rate and stomatal conductance in response to individual inoculation of a PGPR strain (without BC) were observed. Therefore, we suggest that the combined soil application of B. amyloliquefaciens and BC more effectively mitigates drought stress and improves wheat productivity as compared to any of the individual soil applications tested in this study. View Full-Text
Keywords: activated carbon; biofertilizers; gas exchange attributes; wheat; water stress; yield attributes activated carbon; biofertilizers; gas exchange attributes; wheat; water stress; yield attributes
►▼ Show Figures 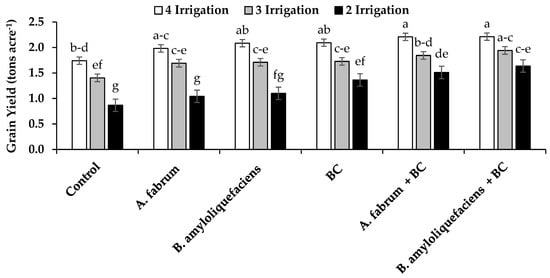