Pomegranate (Punica granatum L.) is a common edible fruit. Its juice can be used as a source of antioxidative compounds, primarily polyphenols and vitamin C, in addition to other vitamins and minerals. Nevertheless, little is still known about how the enzymatic machinery, mainly that related to oxidative metabolism, is influenced by the genotype and the environmental and climate conditions where pomegranate plants grow. In this work, seeds and juices from two pomegranate varieties (Valenciana and Mollar) grown in two different Spanish locations were assayed. Both varieties showed clear differences in their respective polypeptide profiles. The analysis of the isoenzymatic superoxide dismutase (SOD) activity pattern displayed one Mn-SOD and five CuZn-SODs (I–V) whose abundances depended on the variety. Furthermore, by immunoblot assays, at least one additional Fe-SOD with a subunit size of about 23 kDa was also detected in both varieties. Besides this, the presence of the H2O2-scavenging peroxisomal catalase in seeds and juice indicates that an active metabolism of reactive oxygen species (ROS) takes place in this fruit, but the two pomegranate varieties showed opposite activity profiles. The activities of the main NADPH-regenerating enzymes, including glucose-6-phosphate dehydrogenase (G6PDH), 6-phosphlogluconate dehydrogenase (6PGDH), NADP-dependent isocitrate dehydrogenase (NADP-ICDH), and NADP-dependent malic enzyme (NADP-ME), were studied in the same plant materials, and they behaved differently depending on the genotype. Finally, our data demonstrate the presence of two specific enzymes of the peroxisomal glyoxylate cycle, malate synthase (MS) and isocitrate lyase (ICL). These enzymes participate in oilseeds by channeling the lipid catabolism to the carbohydrate synthesis for further use in seed germination and early seedling growth. The results obtained in this work indicate that a similar mechanism to that reported in oilseeds may also operate in pomegranate. View Full-Text
Keywords: catalase; glyoxylate cycle; isozymes; juice; NADP-dehydrogenases; peroxisomes; SDS-PAGE; seeds; superoxide dismutase; varieties Valenciana and Mollar catalase; glyoxylate cycle; isozymes; juice; NADP-dehydrogenases; peroxisomes; SDS-PAGE; seeds; superoxide dismutase; varieties Valenciana and Mollar
►▼ Show Figures 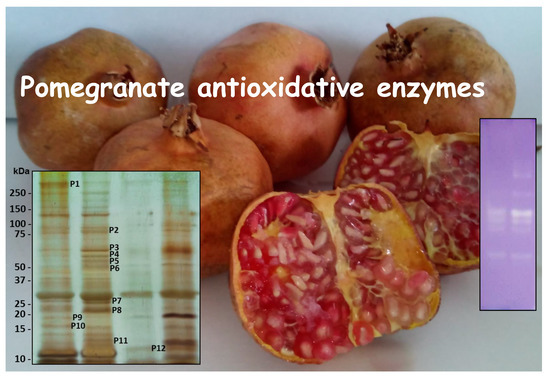