Growth of sesame is known to be limited by poor K nutrition as a result of imbalance in soil exchangeable cations that cause a competitive ion effect in continuous monocropping from upland fields converted paddy. We hypothesized that balancing soil exchangeable cations will improve the K nutrition and growth of sesame plants. Therefore, the specific objectives of this study were to determine the effect of balancing soil exchangeable cations Ca, Mg, and K of continuously monocropped soils on the growth and cation uptake of sesame seedlings and also identify a suitable source of nutrients for improving K nutrition. A pot experiment was conducted under greenhouse condition in a 3 × 3 factorial design consisting of three levels of balancing treatments i.e. inorganic fertilizer for Ca, Mg, and K, rice husk biochar to increase K content, and the three durations of continuous monocropping soils of one year, two years, and four years from upland fields converted paddy. Balancing soil exchangeable cations was aimed at achieving optimal base saturations (CaO, 75%; MgO, 25%; and K2O, 10%). Results showed that balancing exchangeable cations did not significantly affect growth and cation uptake in the one and two-year soils but significant effect was observed in the four-year soil. Overall, plant height and dry weight increased for the balancing treatments of inorganic fertilizer K and rice husk biochar. Balancing exchangeable cations with biochar was more beneficial than with inorganic fertilizers. The four-year soil’s growth increase was attributed to an increase in K concentration and uptake due to the decrease in the soil Ca/K and Mg/K ratios to that of acceptable levels, which eliminated competitive ion effect as the soil K saturation increased above 5.0%, enhancing sesame growth. Therefore, a balanced soil exchangeable Ca, Mg, and K that eliminates a competitive ion effect will improve sesame growth and K nutrition although future research should focus on ensuring balanced cation rations under field conditions in continuous monocropping.
Keywords: cation imbalance; plant height; growth; uptake of K; inorganic fertilizer; rice husk biochar; competitive ion effect cation imbalance; plant height; growth; uptake of K; inorganic fertilizer; rice husk biochar; competitive ion effect

Sesame (Sesamum indicum L.) is an important oilseed crop that is cultivated worldwide [1]. However, the productivity of sesame depends on the availability of adequate mineral nutrients such N, P, and K that are applied as fertilizer [2]. For instance, the seed yield of sesame can increase by supplying adequate K in soil, which was initially low in K [3]. Therefore, potassium (K) is one of the key nutrients required for sesame productivity. It is known that potassium is a monovalent cation essential for the growth of higher plants and protein synthesis and is also the most abundant cation in plant tissues and plays an important role in various physiological and biochemical processes, including photosynthesis [4,5]. The availability of K is affected by several factors. Usually, K nutrition in plants is affected by the balance of both calcium (Ca) and magnesium (Mg). According to Bergmann [6], the Mg/K ratio in soil is very important for the uptake of mineral nutrients by plants because excess concentrations of one can negatively influence plant growth. Moreover, Loide [7] reported that the incorrect use of lime fertilizers alters Ca/Mg and Mg/K ratios, which is detrimental to plants as it decreases yields. Therefore, it is important to maintain the balance of soil cations for crops that show poor growth due to imbalances.
Sesame requires high concentration of K in the tissue, between 1.5% to 2.4%, and low K in the soil can cause poor growth [8]. However, our previous study reported that sesame growth is limited by poor K nutrition as a result of an imbalance in soil exchangeable cations that cause a competitive ion effect on continuous monocropping from upland fields converted paddy in Japan [9]. The decrease in the leaf tissue K content, and consequently its uptake, was attributed to an increase in soil exchangeable Ca and Mg in the long duration of continuous monocropping for four to six years, which caused a competitive ionic effect in the soil, thus negatively influencing the growth and yield. Moreover, the cation ratio of Ca/K and Mg/K significantly increased, leading to a relatively higher ratio of both Mg/K and Ca/K in the sesame leaf tissues, thus suggesting low content of K in the plant. Furthermore, Hannan [10] reported that an excess of Mg could cause a K deficiency in grapevine plants at a ratio of K/Mg < 0.30 in soil. These studies suggested that care should be taken while supplying a high amount of Ca and Mg in soil in order to avoid ionic imbalances in plants.
The imbalances in soil exchangeable cations indicated by their abnormal ratios could be corrected through increasing the concentration of the limiting nutrient so as to raise the base saturation percentages to optimal ranges [11]. Hodges [11] suggests that the ideal base saturations should be about 65% Ca, 10% Mg, and 5% K, resulting in the ratios of Ca/K as 13, Ca/Mg as 6.5, and Ca/Mg as 2, with any deviations in one could cause a deficiency of another. Therefore, balancing the soil exchangeable cations and their ratios through adding more nutrients could be important in correcting any deficiencies of one cation. For instance, increasing the concentration of K in soil which was limited by high exchangeable Mg content, leads to improved cotton growth [12]. Furthermore, high yields of annual grass were achieved with soil exchangeable sites occupied by 50–60% of Ca, 8–12% by Mg, and 4–5% by K, which improved the uptake of K [13]. Although imbalances in soil exchangeable cations Ca, Mg, and K has been reported to negatively influence sesame growth on an upland field converted paddy under continuous monocropping, the effect of balancing these to improve K nutrition and the growth of sesame is still unknown.
To balance soil exchangeable cations, additional nutrients from inorganic fertilizers (Ca, Mg, and K) is required to supply adequate soil exchangeable Ca, Mg, and K in continuously monocropped soil. Other organic materials such as biochar could be used to increase the availability of these soil nutrients [14]. Biochar is a soil amendment produced from thermal degradation of organic materials through the process of pyrolysis and can supply a high amount of potassium [14,15]. Recently, we reported that rice husk biochar improved sesame growth through increasing soil exchangeable K and improving K nutrition on an upland field converted paddy in Japan [16]. However, there is lack of information on the use of biochar material and inorganic fertilizers to balance soil exchangeable cations in deteriorated soils from continuous monocropping fields.
In this study, we hypothesized that balancing soil exchangeable cations will improve the K nutrition of sesame plants. Therefore, the specific objectives of this study were to determine the effect of balancing soil exchangeable cations Ca, Mg, and K of different durations of continuous monocropping years (one, two, and four years) from an upland field converted paddy on the growth and cation uptake of sesame seedlings as well as to identify a suitable source of nutrients for improving K nutrition. It is important to understand the effect of balancing soil exchangeable cations Ca, Mg and K on K nutrition and growth in order to design nutrient management strategies that eliminate cation imbalances so as to improve sesame production under the continuous monocropping on upland fields converted paddies in Japan.

The experiment was set up in a 3 × 3 factorial design consisting of three levels of balancing treatments and 3 types of soils collected from different durations of continuous monocropping years (1-year, 2-years, and 4-years), laid out in a randomized block design with 3 replicates under greenhouse condition at Tottori University, Japan. All pots had basal inorganic fertilizer N-P2O5-K2O of 70–105–70 kg ha−1 in the combination of both the cyclo-diurea (CDU) compound fertilizer (15%-15%-15%) and triple superphosphate (34%). The control treatment of each continuously monocropped soil received 1000 kg ha−1 of dolomite following the normal practice in continuous monocropping of sesame. Sesame cultivar ‘Maruhime’ was sown on the 8 September 2017. All pots were watered twice a day, maintaining a relative moisture content of 60%. At 40 days after sowing, the sesame plants were sampled (17 October 2017). Prior to sampling, the plant heights and leaf chlorophyll content, expressed as SPAD values measured using a chlorophyll meter (SPAD-502, Minolta Co. Ltd, Osaka, Japan), were determined on 16 October 2017. Fresh weight was also determined after harvest and plant samples were oven dried at 72 °C for one week until the plants attained a constant dry weight and the dry weight was determined.

All sesame plant samples were oven dried at 72 °C until a constant weight was attained (after one week). Samples were then ground to a fine powder and digested in a mixture of concentrated H2SO4 (98%) and H2O2 (30%). The plant K, Ca, and Mg concentration in the solution after digestion was determined by using an atomic absorption spectrophotometer with known standards (Model Z-2300, Hitachi Co., Tokyo, Japan). The nutrient uptake was calculated from the concentration and the dry weight of each sesame plant in the treatment.

After the removal of the plants from each pot, soil samples were air-dried, crushed, and all residues removed and sieved through a 2 mm sieve and then stored for analysis. Soil exchangeable K, Ca, and Mg were extracted in a 1 N ammonium acetate (pH 7.1) and analyzed by using an atomic absorption spectrophotometer (Model Z-2300, Hitachi Co., Tokyo, Japan). The cation exchange capacity (CEC) was measured by the 1 N (pH 7.1) ammonium acetate (NH4OAc) extraction methods in which the NH4+ saturated soil was equilibrated with 10% KCl and steam distilled by micro–kjeldahl distillation before titration with 0.1 N H2SO4 [17] and expressed to cmolc kg−1 soil.
The soil base saturations were calculated as the sum of Ca2+, Mg2+, and K+. The Na+ measurements were not considered in the calculation of the base saturation because of very low concentrations (< 1% of the CEC). The exchangeable base saturations were calculated as in Equation 4.
Exchangeable base saturation percentage =

All experimental data presented are the means of three replicates. All data were analyzed using ANOVA using SPSS version 22.0 (SPSS for Windows Inc., Chicago, IL, USA). Tukey’s multiple comparison test at p < 0.05 was used to compare means. When considering the differences between the duration of continuously monocropped soils, a two-way analysis of variance was used with the different balancing treatments (T) and duration of continuous monocropping years (Y) considered as two fixed factors.

3.2. Effect of Balancing Soil Exchangeable Cations on the K, Ca, and Mg Concentrations and the Uptake of Sesame Seedlings

Our study indicated that soil exchangeable cations could be balanced with additional fertilizers and biochar to increase cation uptake especially in K, increasing sesame growth and thereby contributing to the mitigation of sesame growth decline under continuous monocropping. Balancing the exchangeable soil cation significantly decreased the Ca/K and Mg/K ratios to acceptable levels while increasing K saturations to above 5.0%, suggesting an increase in the availability of K in the soil to enhance sesame growth especially in the long duration of continuous monocropping (four-year soil). Our study also demonstrated that a balanced nutrition and fertilization should take into consideration the ratios among Ca, Mg, and K that eliminate the competitive ion effect to improve sesame growth and K nutrition for sesame production. However, balancing cations with biochar tended to be more beneficial than with the inorganic fertilizer since the rice husk biochar provided larger quantities of K than the inorganic fertilizer. Future research should focus on ensuring balanced exchangeable cation ratios under field conditions to mitigate growth and yield decline in continuous monocropping on upland fields converted paddy.

This research was supported by the Ministry of Education, Culture, Sports, Science, and Technology, MEXT of Japan under the Japanese Government MEXT scholarship of the first author. 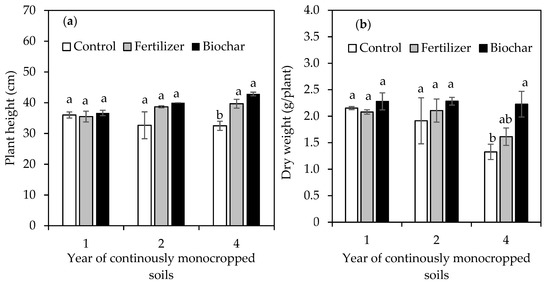