Repeated applications of the same herbicide(s), which are characterized by the same mode of action, increase selection pressure, which in turn favours the evolution of herbicide-resistant weeds. Glufosinate is a broad-spectrum non-selective herbicide being used for weed control for many years around the world. Rigid ryegrass (Lolium rigidum Gaud.) is an economically important grass weed in Greece. Recent complaints by growers about control failure of rigid ryegrass with glufosinate require further investigation and have been the basis of this study. The objectives of this study were to confirm the existence of glufosinate-resistant L. rigidum in Greece and evaluate the effect of L. rigidum growth stage on glufosinate efficacy. Twenty populations of rigid ryegrass from Greece were sampled from five regions, and whole plant dose–response studies were conducted for five populations under controlled conditions with eight rates of glufosinate (0.0, 0.098, 0.187, 0.375, 0.75, 1.5, 3.0, and 6.0 kg a.i. ha−1). Glufosinate resistance was confirmed in three out of five populations with the level of resistance ranging from three-to seven-fold compared with the susceptible populations based on above-ground biomass reduction. Results also revealed that the level of glufosinate-resistance of rigid ryegrass was dependent on the growth stage at which it was applied. View Full-Text
Keywords: Dose response; glufosinate resistance; herbicide; growth stage Dose response; glufosinate resistance; herbicide; growth stage
►▼ Show Figures 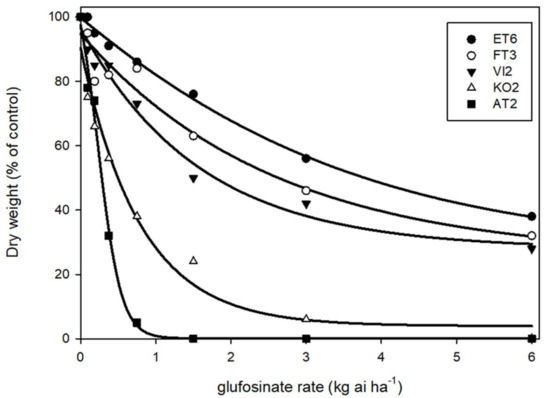