Cotton is one of the most important economic crops worldwide. As the global demands rising, cotton yield improvement is the most important goal of cotton breeding. Hybrids have great potential for increasing yield, however, the genetic mechanism of hybrids is still not clear. To investigate the genetic basis of cotton hybrids, we resequenced 9053 and sGK9708 with 62.13x coverage depth, the parents of the elite hybrid cotton CCRI63 that has obvious heterosis in lint percentage (LP) and boll weight (BW). Based on the cotton reference genome (TM-1), 1,287,661 single nucleotide polymorphisms (SNPs) and 152,479 insertions/deletions (InDels) were identified in 9053, and 1,482,784 SNPs and 152,985 InDels in sGK9708. Among them, 8649 SNPs and 629 InDels in the gene coding regions showed polymorphism between parents. Moreover, these variations involved 5092 genes, and 3835 of these genes were divided into 10 clusters based on the gene expression profiles. The genes in Cluster 3 and 7 were specifically expressed in the ovule and fiber development stage, suggesting that they might relate to LP and BW. We further co-localized the polymorphic SNPs and InDels with the reported quantitative trait loci (QTLs) of LP and BW, and identified 68 genes containing the polymorphic SNPs or InDels within these QTL intervals and as being related to fiber development. This suggested that the outstanding traits of CCRI63 such as LP and BW might be generated by accumulating the favorable variations from the parents. The results generated herein provide a genetic basis for cotton hybrids and genetic markers for marker-assisted selection breeding of cotton. View Full-Text
Keywords: upland cotton; genome resequencing; single nucleotide polymorphisms; insertions/deletions; heterosis upland cotton; genome resequencing; single nucleotide polymorphisms; insertions/deletions; heterosis
►▼ Show Figures 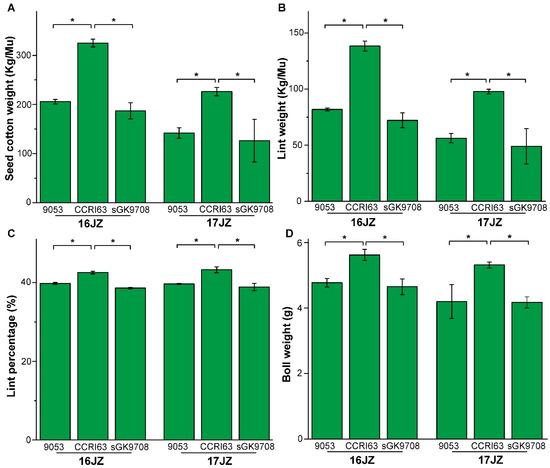