Bird Management in Blueberries and Grapes

Kernel images of six wheat species were subjected to shape and color analyses to determine variations in the morphometric parameters of grain. The values of kernel shape descriptors (area, perimeter, Feret diameter, minimal Feret diameter, circularity, aspect ratio, roundness, solidity) and color descriptors (H, S, I and L*a*b*) were investigated. The influence of grain colonization by endophytic fungi on the color of the seed coat was also evaluated. Polish wheat grain was characterized by the highest intraspecific variation in shape and color. Bread wheat was most homogeneous in terms of the studied shape and color descriptors. An analysis of variations in wheat lines revealed greater differences in phenotypic traits of relict wheats, which have a larger gene pool. The grain of ancient wheat species was characterized by low roundness values and relatively low solidity. Shape and color descriptors were strongly discriminating components in the studied wheat species. Their discriminatory power was determined mainly by genotype. A method that supports rapid discrimination of cereal species and admixtures of other cereals in grain batches is required to guarantee the quality and safety of grain. The results of this study indicate that digital image analysis can be effectively used for this purpose.
Keywords: digital image analysis; wheat; multivariate analysis digital image analysis; wheat; multivariate analysis

The experimental material comprised the grain of six spring wheat taxa: bread wheat (T. aestivum ssp. aestivum, Taa, two lines), spelt (T. aestivum L. ssp. spelta, Tas, nine lines), durum wheat (T. turgidum ssp. durum, Ttdu, three lines), Polish wheat (T. turgidum L. ssp. polonicum, Ttp, 17 lines), emmer (T. turgidum ssp. dicoccum, Ttdi, 23 lines) and einkorn (T. monococcum ssp. monococcum, Tmm, three lines). All lines were reproduced at the Department of Plant Breeding and Seed Production of the University of Warmia and Mazury in Olsztyn, Poland. The lines were obtained by the reproduction of accessions obtained from National Centre for Plant Genetic Resources (NCPGR), Radzików, Poland, National Plant Germplasm System (NPGS), USA, Leibniz Institute of Plant Genetics and Crop Plant Research (IPK) in Gatersleben, Germany. A field experiment was conducted in 2014/2015 in the Agricultural Experiment Station in Bałcyny (53°36′ N, 19°51′ E), Poland. Plots with an area of 9 m2 each were established on soil typically used for wheat cultivation. The preceding crop was a mixture of cereals and legumes. Before sowing, plots were fertilized with 20/70/95 kg N/P2O5/K2O ha−1. The second rate of the N fertilizer was applied in May at 20 kg ha−1. All wheats were sown at a rate of 400 germinating kernels per m2. The grains of wheat species were subjected to shape and color analysis, and then analyzed for fungal presence.

Digital images were acquired with a flatbed CCD scanner (Epson Perfection V370 Photo, Epson, Shinjuku, Tokyo, Japan) with a true optical resolution of 4800 dpi, connected to a PC with Windows 10. The image analysis was performed with the ImageJ program (v. 1.51h, Laboratory for Optical and Computational Instrumentation, Madison, WI, USA) [41]. All measurements were carried out in three replications. Each replication consisted of 50 selected randomly kernels, placed on the scanner screen with the crease down. A dark paper background (located above the flatbed scanner) with the predominance of the blue component (R = 100, G = 140, B = 200) was used to increase contrast between the kernel images and the background. Color images at 24-bit with 200 dpi resolution were recorded in BMP (Bitmap Image File) format. At the beginning of image segmentation, a median filter was applied to reduce noise (radius of four pixels, one replication). The color thresholding procedure was performed in an identical manner for all analyzed images, and a lower threshold value was set for the color component R at 120. This procedure thresholds 24-bit RGB images based on hue, saturation, and intensity (HSI), red, green and blue (RGB), CIE L*a*b* (expresses color as three numerical values, L* for the lightness and a* and b* for the green–red and blue–yellow color components), or YUV (Y is a luminance component while U and V are chrominance components). Filter ranges can be set manually, or based on the pixel value components of a user-defined region of interest (experimental). A thresholded image is an RGB image, not an 8-bit grayscale image. Color images were copied to a new window with uniform black background. The above procedure was performed to generate images for shape and color analyses.

The 24-bit color images were converted to three 8-bit images in channels R, G, B. The color analysis was conducted based on the average values of variables R, G, B for every ROI, which were later used to calculate the values of H, S, I and L*a*b*. Parameter H denotes hue, S denotes saturation, I denotes intensity, L* denotes luminance (100 = white and 0 = black), a* denotes redness–greenness, and b* denotes yellowness–blueness. The variables R, G, B were converted to H, S, I and to L*a*b* according to the formulas proposed by Wiwart et al. [42]. Color measurements were expressed with parameters H, S, I and L*a*b*.

Wheat heads from the field experiment were harvested manually at maturity and threshed. Randomly selected kernels were subjected to image analysis, and 25 kernels from each wheat line were used to determine the prevalence of fungal pathogens in spring wheat grain. Kernels were surface-disinfected in 1% NaOCl (for endophyte counts) for 1 min and placed on potato dextrose agar (PDA, Merck, Warsaw, Poland), pH = 5.5 [43]. Five kernels from every wheat line were placed on a Petri plate in five replications. The above procedure was performed under sterile conditions. Fungi were transferred to PDA slants and identified based on mycological keys [44,45]. Fungi were identified based on a morphological description of spores and mycelia, colony appearance, color, and shape. The number of endophytic fungal colonies was counted after seven days of incubation at 24 °C. Fungal filaments characteristic of the genus Fusarium were isolated and transferred to individual Petri plates to determine their identity under a light microscope (Nikon Eclipse, Tokyo, Japan). Specimens of fungal filaments were viewed under 400× magnification. Fungal pathogens colonizing the grain of the evaluated wheats were identified to species level to verify the hypothesis that fungal infections can influence grain color.

The results of image analysis were processed statistically using STATISTICA 12 software StatSoft Polska, Cracow, Poland) [46]. The significance of differences between mean values was estimated by analysis of variance, and the mean values were compared by Tukey’s test. The morphological traits of kernels (shape and color) were analyzed by agglomerative hierarchical clustering (Ward method with the application of Euclidean distances) using STATISTICA 12 software [46]. The cluster analysis was performed on eight and six shape and color parameters of 50 wheat lines classified into six wheat species. Shape and color descriptors were also processed by PCA. The results of PCA were presented in graphic form. A correlation analysis was carried out for all compared shape and color descriptors and for single kernel weight.

A mycological analysis revealed that the grain of all analyzed wheat species was most abundantly colonized by A. alternata (Figure 4), which accounted for 78% of all pathogenic fungi isolated from bread wheat and for more than 99% of all pathogenic fungi isolated from einkorn and spelt. Kernels were also colonized by fungi of the genera Fusarium (Fusarium poae (Peck) Wollenw and Fusarium sporotrichioides Sherbakoff), Epicoccum nigrum Link, Drechslera sp., and Penicillium sp. (Figure 4). Other fungal species were present in trace amounts on einkorn, Polish wheat, durum wheat, and spelt kernels, whereas Fusarium fungi, F. poae, and F. sporotrichioides accounted for nearly 10% of pathogens isolated from emmer. Bread wheat was noticeably colonized by F. poae, which was identified in 16% of isolates (Figure 4). A. alternata colonies were generally dark brown to dark olive-green in color, and they produced characteristic long chains of oval to ellipsoid conidia. Fusarium poae produced orange–pink mycelia with spherical conidia in conidiophores, whereas F. sporotrichioides was identified based on the presence of numerous oval microconidia with short terminal tips. Epicoccum nigrum was identified based on the presence of round, multiseptate conidia, and Drechslera sp.—based on the presence of ellipsoid and somewhat elongated conidia. Penicillium sp. were detected based on the morphological traits of spores in chains and green–white mycelia. However, there were no significant correlations between fungal colonization and the color of the seed coat.

PCA supported the very strong discrimination of all studied wheat taxa in terms of the combined effect of shape and color (Figure 5). A total of six clusters were identified, each containing elements characteristic of a given wheat species. The combined effect of PC1 and PC2 explained 65.6% of total variance. The correlation coefficients between the contribution of the variable (PC) to PC1 and PC2 are presented in Table 6. The perimeter had the weakest influence on discrimination, based on PC1, whereas FD, L*, and S had the smallest effect on discrimination based on PC2. The combined contribution of PC1 and PC2 for eight shape descriptors was determined at 0.483 and 0.544, respectively, and for six color descriptors—at 0.516 and 0.457, respectively. The above indicates that shape and color variables had a similar influence. The principal component analysis validated the results of hierarchical clustering for shape and color components of kernel images. Wheat lines characterized by the lowest species diversity were grouped separately. Bread wheat lines formed separate clusters (Figure 2 and Figure 3) and a separate group of objects (Figure 5). Similar observations were made in a durum wheat line. The strong discrimination of Polish wheat, which was grouped with spelt and emmer lines in cluster analysis, was confirmed by PCA (Figure 5). 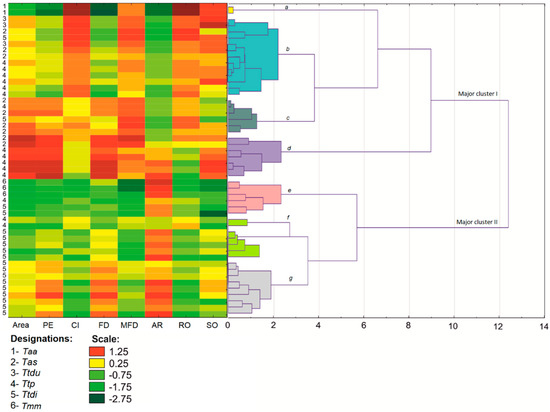 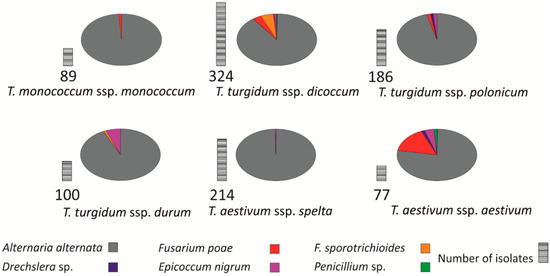