Intercropping of forage grasses and legumes can increase forage productivity and nutritive value; however, intercropping of corn with warm-season forages has not yet been studied in southeast U.S., thus requiring more information. The purpose of this study was to determine the yield and nutritive value potential of warm-season annual forages intercropped with corn (Zea mays L.) for silage production. Crabgrass [Digitaria sanguinalis (L.)] is considered a weed for corn production systems; however, our study shows that if crabgrass is interseeded with corn, it does not compete for resources and can maintain high corn yields. Forage mass for sunn hemp (Crotalaria juncea L.) was higher than that of cowpea [Vigna unguiculata (L.) Walp.] and crabgrass in 2016, due to a drought in spring and summer, giving sunn hemp a competitive advantage. Crude protein content was higher for cowpea as compared to crabgrass and sunn hemp, due to cowpea’s ability to maintain its vegetative stage and high N-fixation, when compared to crabgrass and sunn hemp. Despite differences in the mass of the intercropped forages, the total herbage mass of the produced silage did not differ in 2016 and 2017. Intercropped forages can be harvested and ensiled with corn for silage production or can be left with the corn residue after harvesting to be grazed on in integrated crop-livestock systems. View Full-Text
Keywords: intercropping systems; warm-season forages; corn silage intercropping systems; warm-season forages; corn silage
►▼ Show Figures 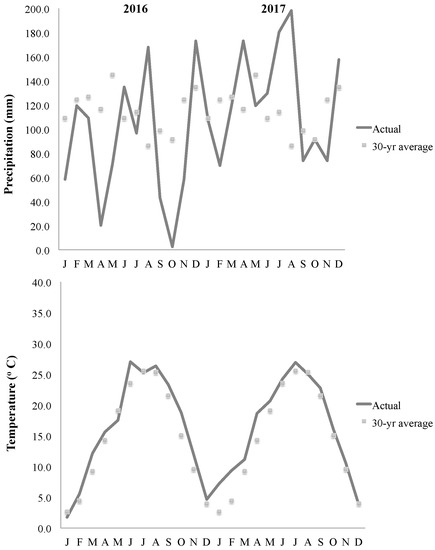