Generation and Characterisation of a Reference Transcriptome for Phalaris (Phalaris aquatica L.)

RNA sequencing (RNA-Seq) is a deep sequencing method used for transcriptome profiling. RNA-Seq assemblies have successfully been used for a broad variety of applications, such as gene characterisation, functional genomic studies, and gene expression analysis, particularly useful in the absence of a well-studied genome reference sequence. This study reports on the development of reference unigene sets from faba bean using RNA-Seq. Two Australian faba bean cultivars (Doza and Farah) that differ in terms of disease resistance, breeding habit, and adaptation characteristics, and have been extensively used in breeding programs, were utilised in this study. The de novo assembly resulted in a total of 58,962 and 53,275 transcripts with approximately 67 Mbp (1588 bp N50) and 61 Mbp (1629 bp N50) for Doza and Farah, respectively. The generated transcripts have been compared to the protein and nucleotide databases of NCBI, as well as to the gene complements of several related legume species such as Medicago truncatula, soybean, and chickpea. Both assemblies were compared to previously-published faba bean transcriptome reference sets for the degree of completeness and utility. Annotation of unigenes has been performed, and patterns of tissue-specific expression identified. The gene complement derived from this comprehensive transcriptome analysis shows that faba bean, despite its complex 13 Gbp genome, compares well to other legumes in expressed gene content. This study in faba bean represents the most comprehensive reference transcriptomes from two different Australian cultivars available to date and it provides a valuable resource for future genomics-assisted breeding activities in this species. View Full-Text
Keywords: V. faba cultivars; RNA-Seq; Illumina; de novo assembly; BLAST; sequence annotation; tissue-specific gene expression V. faba cultivars; RNA-Seq; Illumina; de novo assembly; BLAST; sequence annotation; tissue-specific gene expression
►▼ Show Figures 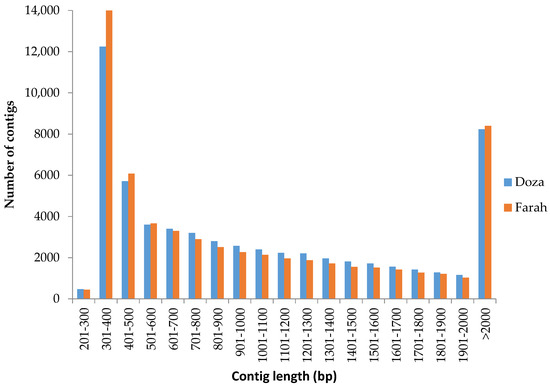