Soybean (Glycine max) cultivars adapted to high latitudes have a weakened or absent sensitivity to photoperiod. The purposes of this study were to determine the molecular basis for photoperiod insensitivity in various soybean accessions, focusing on the sequence diversity of the E4 (GmphyA2) gene, which encodes a phytochrome A (phyA) protein, and its homoeolog (GmphyA1), and to disclose the evolutionary consequences of two phyA homoeologs after gene duplication. We detected four new single-base deletions in the exons of E4, all of which result in prematurely truncated proteins. A survey of 191 cultivated accessions sourced from various regions of East Asia with allele-specific molecular markers reliably determined that the accessions with dysfunctional alleles were limited to small geographical regions, suggesting the alleles’ recent and independent origins from functional E4 alleles. Comparison of nucleotide diversity values revealed lower nucleotide diversity at non-synonymous sites in GmphyA1 than in E4, although both have accumulated mutations at almost the same rate in synonymous and non-coding regions. Natural mutations have repeatedly generated loss-of-function alleles at the E4 locus, and these have accumulated in local populations. The E4 locus is a key player in the adaptation of soybean to high-latitude environments under diverse cropping systems. View Full-Text
Keywords: genetic diversity; soybean; flowering; phytochrome A; photoperiod insensitivity genetic diversity; soybean; flowering; phytochrome A; photoperiod insensitivity
►▼ Show Figures 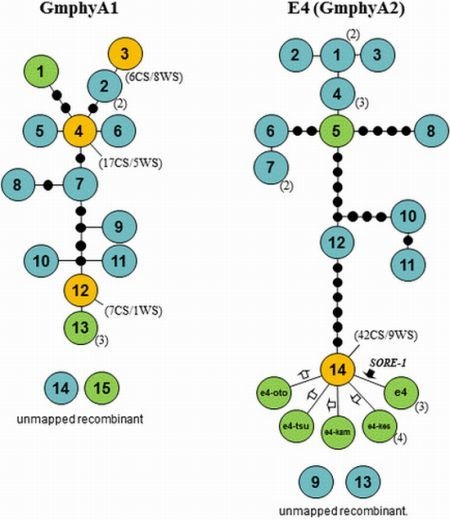