Some new foods (sprouts, microgreens and baby leaf) of the brassica genus are appreciated for their nutritional and nutraceutical values. The aim of this experimental trial was to improve the nutraceutical traits of these foods by evaluating the effects of the climatic condition, genotype, and plant growth stage on the development of greater quality in relation to these new foods. The morphometric and glucosinolates (GLSs) traits of three traditional Italian cultivars of Brassica oleracea crops, such as broccoli (B. oleracea var. italica), namely the traditional Sicilian landrace ‘Broccolo Nero’ (BN) and the commercial ‘Cavolo Broccolo Ramoso Calabrese’ (CR), as well as the commercial kale cultivar ‘Cavolo Laciniato Nero di Toscana’ (CL) (B. oleracea var. acephala DC.), were evaluated in an unheated greenhouse in Catania during the end of 2019 and the beginning of 2020. Plant growth was studied at different phenological stages—from seeds to sprouts, microgreens, and baby leaves—over two growing cycles, one in autumn–winter and the other in spring–summer. ‘Broccolo Nero’ (BN) broccoli showed more rapid growth and biomass production than the other two cultivars evaluated (i.e., weight, hypocotyl length, and leaf width). The GLS profile varied significantly (p < 0.05), in relation both to plant’s growth stage and to genotype. The highest amount of glucoraphanin was detected for BN microgreens and baby leaves, about 8 µmol g−1 d.w., whereas glucobrassicin and its related derivatives were about 14 µmol g−1 d.w. in microgreens and baby leaves of CL and about 15 µmol g−1 d.w. and 10 µmol g−1 d.w. for glucoraphanin in CR, respectively. These new foods can also be produced at home with simple and cheap equipment View Full-Text
Keywords: Brassicaceae; vegetable crops; germplasm exploitation; new foods; greens Brassicaceae; vegetable crops; germplasm exploitation; new foods; greens
►▼ Show Figures 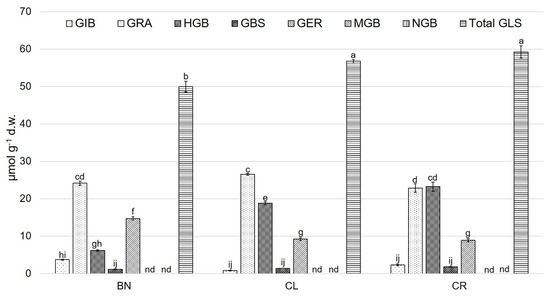