Adaptive Responses to Nitrogen and Light Supplies of a Local Varieties of Sweet Pepper from the Abruzzo Region, Southern Italy
Previous Article in Special Issue

Bacterial burn is one of the major diseases affecting pear trees worldwide, with serious impacts on producers and economy. In Morocco, several pear trees (Pyrus communis) have shown leaf burns since 2015. To characterize the causal agent of this disease, we isolated fourteen bacterial strains from different parts of symptomatic pear trees (leaves, shoots, fruits and flowers) that were tested in planta for their pathogenicity on Louise bonne and Williams cultivars. The results showed necrotic lesions with a significant severity range from 47.63 to 57.77% on leaves of the Louise bonne cultivar inoculated with isolate B10, while the other bacterial isolates did not induce any disease symptom. 16S rRNA gene sequencing did not allow robust taxonomic discrimination of the incriminated isolate. Thus, we conducted whole-genome sequencing (WGS) and phylogenetic analyzes based on gyrA, gyrB and cdaA gene sequences, indicating that this isolate belongs to the Bacillus altitudinis species. This taxonomic classification was further confirmed by the Average Nucleotide Identity (ANI) and the in silico DNA-DNA hybridization (isDDH) analyzes compared to sixty-five Bacillus spp. type strains. The genome was mined for genes encoding carbohydrate-active enzymes (CAZymes) known to play a role in the vegetal tissue degradation. 177 candidates with functions that may support the in planta phytopathogenicity results were identified. To the best of our knowledge, this is the first data reporting B. altitudinis as agent of leaf burn in P. communis in Morocco. Our dataset will improve our knowledge on spread and pathogenicity of B. altitudinis genotypes that appears as emergent phytopathogenic agent, unveiling virulence factors and their genomic location (i.e., within genomic islands or the accessory genome) to induce trees disease. View Full-Text
Keywords: greenhouse; infiltration; next generation sequencing; pathovar; phylogeny; spray; virulence factors greenhouse; infiltration; next generation sequencing; pathovar; phylogeny; spray; virulence factors
►▼ Show Figures 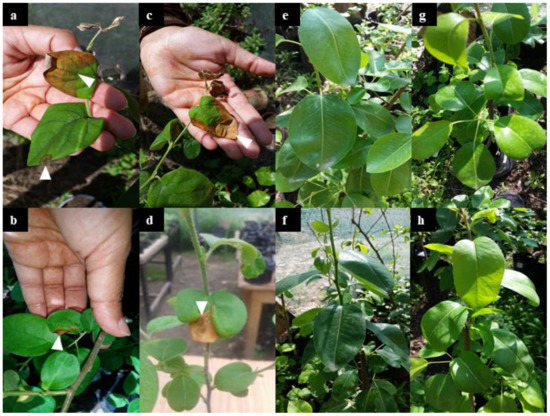