Genotype X Environment Response of ‘Matooke’ Hybrids (Naritas) to Pseudocercospora fijiensis, the Cause of Black Sigatoka in Banana

Growing bananas resistant to Pseudocercospora fijiensis, the cause of black Sigatoka, is the preferred disease control strategy for resource-poor farmers. Banana breeding programs in east Africa have developed 27 Matooke hybrids (commonly known as NARITAs) with higher yields than local landraces. To assess the response of NARITA hybrids to P. fijiensis, 22 hybrids were evaluated under natural field conditions in four locations—Kawanda and Mbarara in Uganda, and Maruku, and Mitarula in Tanzania—between 2016 and 2018 for three crop cycles. Black Sigatoka was visually assessed and the area under the disease progress curve calculated for each plant over time. Significant differences (p < 0.001) were observed between genotypes, environments, and their interaction. The highest contributor to black Sigatoka severity (39.1%) was the environment, followed by the genotype (37.5%) and the genotype Χ environment interaction (GEI) (23.4%). NARITA 2, 7, 14, 21 and 23 were resistant and the most stable hybrids across locations. If other attributes such as the yield and taste are acceptable to end-users, these hybrids can be released to farmers in the region to replace highly susceptible landraces. Mitarula was identified as an ideal site for evaluating banana against black Sigatoka and should be used as a representative location to minimize costs of disease evaluations. View Full-Text
Keywords: Sigatoka; east African highland bananas (EAHB), NARITAs; stability; genotype by environment interaction (GEI) Sigatoka; east African highland bananas (EAHB), NARITAs; stability; genotype by environment interaction (GEI)
►▼ Show Figures 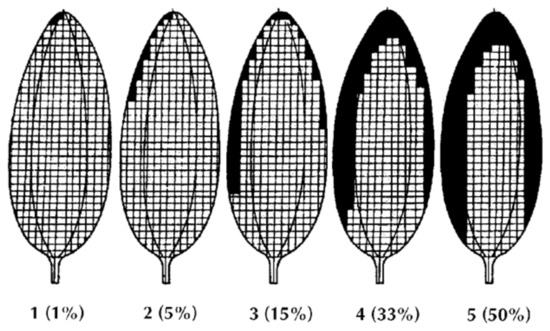