Fusarium Head Blight and Associated Mycotoxins in Grains and Straw of Barley: Influence of Agricultural Practices
Previous Article in Journal

During germination at low temperatures, seeds rich in proteins may experience damage to their cytoplasmic membranes. The study aimed to investigate the influence of the germination temperature on growth, development, and yield of four cultivars of soybean, a typical thermophilic species. The seeds were germinated at 10, 15, and 25 °C in the dark. After 48 h, one part of the seeds was analyzed for their amylase and dehydrogenase activity, cell membrane permeability, and germination vigor. The other part was transferred into soil and cultivated up to yielding. Chlorophyll fluorescence, fresh (FW) and dry weight (DW) of shoots, pod and seed number, and seed DW were analyzed. The plants of cvs. ‘Abelina’, ‘Malaga’, and ‘Merlin’, germinating at low temperature, produced the highest number of seeds. Seed number negatively correlated with their DW and positively with the number of active reaction centers (RC/CSm) in all cultivars. In cvs. ‘Abelina’ and ‘Malaga’, the number of seeds also positively correlated with the index performance of photosystem II (PSII), which was the highest in all plants germinating at low temperature. We suggest cultivating cv. ‘Abelina’ in cooler regions, while cvs. ‘Petrina’ and ‘Malaga’ in warmer areas. View Full-Text
Keywords: amylase; chlorophyll fluorescence; cold; dehydrogenases; ion leakage; seed germination; soybean cultivars amylase; chlorophyll fluorescence; cold; dehydrogenases; ion leakage; seed germination; soybean cultivars
►▼ Show Figures 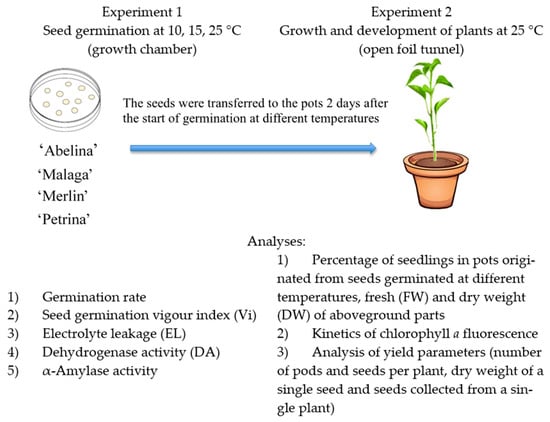