Investigation on the Relationship between Morphological and Anatomical Characteristic of Savoy Cabbage and Kale Leaves and Infestation by Cabbage Whitefly (Aleyrodes proletella L.)
Next Article in Special Issue

Side Effects of Pesticides on the Olive Fruit Fly Parasitoid Psyttalia concolor (Szépligeti): A Review

Spain has ranked 6th on the harvested bean area and 8th in bean production in the European Union (EU). The soils of this area have mixed silt loam and sandy loam texture, with moderate clay content, neutral or acidic pH, rich in organic matter and low carbonate levels, providing beans with high water absorption capacity and better organoleptic qualities after cooking. Similar to other crops, it is attacked by some phytopathogens. Hitherto, chemical methods have been used to control these organisms. However, with the Reform of the Community Agrarian Policy in the EU, the number of authorized plant protection products has been reduced to prevail food security, as well as to be sustainable in the long term, giving priority to the non-chemical methods that use biological agents, such as Trichoderma. This study aimed to investigate the relative importance of various crop soil parameters in the adaptation of Trichoderma spp. autoclaved soils (AS) and natural soils (NS) from the Protected Geographical Indication (PGI) “Alubia La Bañeza—León” that were inoculated with Trichoderma velutinum T029 and T. harzianum T059 and incubated in a culture chamber at 25 °C for 15 days. Their development was determined by quantitative PCR. Twelve soil samples were selected and analyzed from the productive zones of Astorga, La Bañeza, La Cabrera, Esla-Campos and Páramo. Their physicochemical characteristics were different by zone, as the texture of soils ranged between sandy loam and silt loam and the pH between strongly acid and slightly alkaline, as well as the organic matter (OM) concentration between low and remarkably high. Total C and N concentrations and their ratio were between medium and high in most of the soils and the rest of the micronutrients had an acceptable concentration except for Paramo’s soil. Both Trichoderma species developed better in AS than in NS, T. velutinum T029 grew better with high levels of OM, total C, ratio C:N, P, K, Fe, and Zn than T. harzianum T059 in clay soils, with the highest values of cation exchange capacity (CEC), pH, Ca, Mg and Mn. These effects were validated by Canonical Correlation Analysis (CCA), texture, particularly clay concentration, OM, electrical conductivity (EC), and pH (physical parameters) and B and Cu (soil elements) are the main factors explaining the influence in the Trichoderma development. OM, EC, C:N ratio and Cu are the main soil characteristics that influence in T. velutinum T029 development and pH in the development of T. harzianum T059. View Full-Text
Keywords: soil physicochemical characteristics; real-time quantitative PCR (qPCR); Trichoderma velutinum; Trichoderma harzianum; bean; canonical correlation analysis soil physicochemical characteristics; real-time quantitative PCR (qPCR); Trichoderma velutinum; Trichoderma harzianum; bean; canonical correlation analysis
►▼ Show Figures 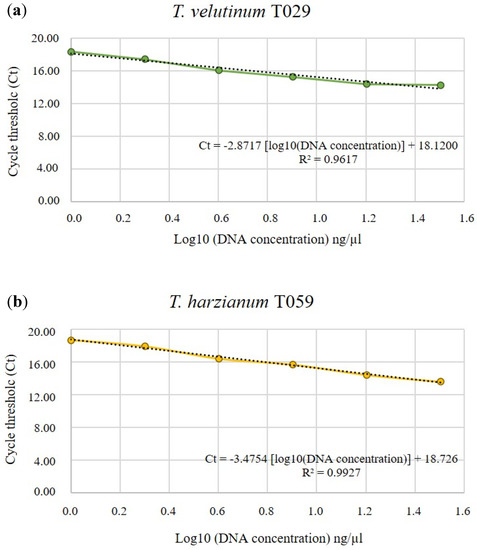