Maize Breeding in the Highlands of Ecuador, Peru, and Bolivia: A Review

Genetic Diversity for Dual Use Maize: Grain and Second-Generation Biofuel

Maize biomass from agricultural residues can be a substrate for biofuel production. However, commercial breeding programs have focused on grain yield for food and feed, and whole plant yield and nutritive value for silage, with little attention paid directly to stover yield or composition. Enhancing the energy content of crop residues with higher quality cellulosic biomass for ethanol conversion should provide a complementary use to grain use. We also question whether there is maize germplasm predisposed to dual use as second-generation biofuel. Twenty genotypes, including landraces from Spain, Atlantic, and Mediterranean Europe and genotypes derived from Iowa stiff stalk synthetic, Lancaster, and commercial hybrids were studied in a randomized complete block design across environments in Galicia (Spain) in 2010 and 2011. Germplasm was evaluated for agronomic characteristics and fiber parameters. Results show high heritability for all characteristics and parameters, ranging from 0.81 to 0.98. Principal components analysis revealed clear differences among origin of the varieties studied. Hybrids had the highest grain yield values and B73xMo17 and PR34G13 had the highest grain yield overall, at 10133 and 9349 kg/ha, respectively. European landrace varieties had lower harvest indexes (HI) than the hybrid origin, with Faro and BSL having HI of 0.43–0.47, compared to hybrid PR34613 at 0.56. Fiber concentrations were significantly correlated with yield performance, with values ranging from 0.38 to 0.61 for cob fibers and between −0.14 to −0.57 for stover fibers. Fiber concentrations were significantly different, based on the origins, in cobs but not in stover, with the Atlantic European group showing a favorable trend for cob exploitation with low acid detergent lignin and high acid detergent fiber and neutral detergent fiber values. In summary, population origin showed a reservoir of genetic diversity for breeding to improve residue quality, suggesting that adaptation played a role for stover yield and quality. European landraces could be used in prebreeding programs with stover yield and fiber quality as target traits for dual-purpose maize. View Full-Text
Keywords: maize; dual-purpose; biofuels; ADF; ADL; NDF; landraces; PCA; stover maize; dual-purpose; biofuels; ADF; ADL; NDF; landraces; PCA; stover
►▼ Show Figures 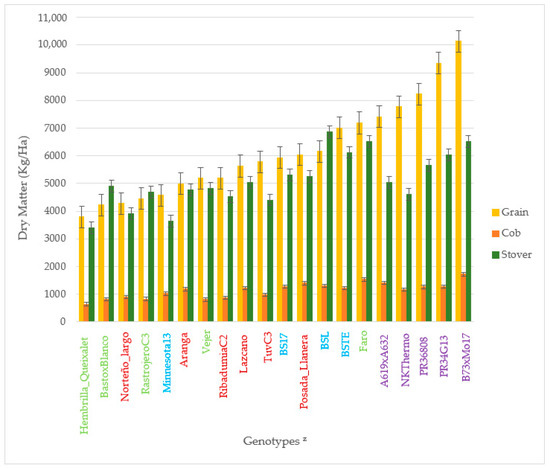