Modification of Yield and Fiber Fractions Biosynthesis in Phaseolus vulgaris L. by Treatment with Biostimulants Containing Amino Acids and Seaweed Extract
Next Article in Special Issue

The Influence of UV on the Production of Free Terpenes in Vitis vinifera cv. Shiraz
Previous Article in Journal

Interest in the consumption of the fruits of pepper (Capsicum spp.) is not only due to its organoleptic characteristics, but also due to its bioactive compounds content, which are reported to provide essential benefits to human health. However, the amount and diversity of these compounds in each fruit specimen depend on its genotype and on a number of environmental factors. This work describes the quantitative ultra-high-performance liquid chromatography coupled to photodiode-array (UHPLC-PDA) analysis of the capsinoids content in four varieties of pepper (‘Habanero’, ‘Habanero Roxo’, ‘Bode’, and ‘Malagueta’) grown until different development stages in a greenhouse under controlled conditions. In all the varieties analyzed, capsiate was the only capsinoid found. The accumulation of capsiate, in all the pepper varieties, started from the 10th to the 20th day post-anthesis (dpa), and increased during the first days (between the 20th and the 27th dpa). From that moment a drastic reduction took place until the end of the ripening stage, except for ‘Bode’ peppers, where the capsiate content increased from the first harvest point on the 20th dpa up to the 76th dpa. The capsiate accumulation patterns over the development of the fruit has been related to the capsaicionoids accumulation patterns in the same samples of the four varieties of pepper. According to our results, the content evolution of both families of compounds will vary depending on each fruit’s genotype, as well as on environmental conditions. No clear trends have been established and, therefore, an in-depth analysis under controlled conditions should be carried out. View Full-Text
Keywords: ‘Bode’ pepper; capsiate content; Capsicum spp.; capsinoids; fruit ripening; ‘Habanero’ pepper; ‘Habanero Roxo’ pepper; ‘Malagueta’ pepper; UHPLC ‘Bode’ pepper; capsiate content; Capsicum spp.; capsinoids; fruit ripening; ‘Habanero’ pepper; ‘Habanero Roxo’ pepper; ‘Malagueta’ pepper; UHPLC
►▼ Show Figures 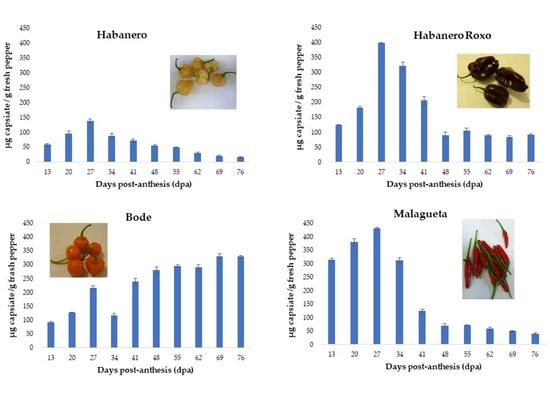