Wheat (Triticum aestivum L.) is an important cereal cultivated around the world. Wheat sprouts are rich in starch and other nutrients, including dietary fiber, minerals, vitamins, phytochemicals, and protein [1]. Wheat development, growth, and yield are affected by various environmental factors (especially drought and salinity). Salinity is one of the major obstacles to increasing the production of agricultural land throughout the world, and can severely limit crop production, especially in arid and semi-arid regions [2,3]. Salinity impairs seed germination, reduces nodule formation, delays plant development, and reduces crop yield [3]. Some studies have indicated that under high salt concentrations in irrigation water and soil, many plants are affected by osmotic stress, nutritional imbalance, oxidative stress, and water deficiency [4,5,6]. Moreover, changes in the levels of secondary metabolites, such as phenylpropanoid and terpenoids, leads to enhanced plant defense mechanisms against stress by causing high salinity [7,8,9].
Phenylpropanoids belong to the class of secondary metabolites are present in fruits, vegetables, nuts, and various parts of the medicinal herbs (seeds, root, leaves) [10,11,12]. They have been reported to have pharmacological effects that are beneficial to human health [13,14,15]. Phenylpropanoids are known to prevent carcinogenesis and decrease the risk of type 2 diabetes and heart attack [16,17]. Lignin is the component of plant cell walls [18], some phenylpropanoids have roles in plant defense, possess antimicrobial activity, can function as signal molecules in plant-microbe interactions [19]. Phenylalanine is the precursor of the phenylpropanoid biosynthetic pathway (Figure 1). Phenylalanine ammonia lyase (PAL), cinnamate 4-hydroxylase (C4H), and p-coumaroyl coenzyme A ligase (4CL) were catalyzed in the first, second, and third step, respectively. The synthesis of p-coumaroyl CoA from phenylalanine is known as the general phenylpropanoid biosynthetic pathway [20]. Ferulic acid is synthesized from p-coumaric acid by the action of 4-hydroxycinnamate 3-hydroxylase (CH3) and caffeic acid 3-O-methyltransferase (COMT). In the subsequent steps, dihydrokaempferol is synthesized from p-coumaroyl CoA through the action of chalcone synthase (CHS), chalcone isomerase (CHI), and flavone 3-hydroxylase (F3H). Then, flavonoid 3′-hydroxylase (F3′H) catalyzes the synthesize of dihydroquercetin. The enzyme favonol synthase (FLS) is helpful for the conversion of dihydroquercetin to quercetin. The dihydroflavonol-4 reductase (DFR) catalyzes the conversion of dihydroquercetin to leucocyanidin, and then further converts into epicatechin.
The effect of salinity on quality and nutritional value were reported in some plants such as Pisum sativum [21], Fagopyrum esculentum [22], Lactuca sativa [23], and Zea mays [24]; however, the effect of NaCl treatment on phenylpropanoid biosynthesis in wheat sprout has not been well studied. Therefore, in the present study, we investigated the genes expression related to phenylpropanoid biosynthesis pathways and their accumulation in wheat sprouting by using various concentrations of NaCl. This study will help to understand phenylpropanoid accumulation in sprouting wheat under specific environmental conditions and proposes methods to increase the accumulation of secondary metabolite in wheat sprouts.

Seeds of wheat were provided by Asia Seed Co., Ltd. (Seoul, Korea). Five grams of wheat seeds were sowed in a plastic pot (size: 11 cm × 11 cm) and grown in a growth chamber under a 16 h light/8 h dark cycle at 25 °C. Treatment with varying NaCl concentrations (0, 50, 100, and 200 mM) was applied for finding the optimal concentration for phenylpropanoid accumulation in wheat sprouts. Whole seedlings were harvested 6 days after the treatment. For the time treatment experiment, 6-day-old wheat seedlings were treated with 50 mM NaCl and 0 mM NaCl as the control. Whole seedlings were harvested at different time intervals (0, 6, 12, 24, 48, and 72 h). All the experiment samples were prepared and analyzed in triplicates.

In this study, a previously published compound extraction method was used [26] with some modifications. Phenylpropanoids were extracted by adding 2 mL MeOH (80%) to each sample (100 mg), vortexing and incubating for 1 h in a sonicator (Branson Ultrasonic Co., Danbury, CT, USA), then centrifuging (12,000 rpm at 4 °C) for 15 min. The supernatant was filtered using Whatman No. 42 filter paper. Phenylpropanoid compounds were quantified and analyzed using a slightly modified method of Cuong et al. (2018) [24] in the HPLC system with C18 column (250 mm × 4.6 mm, 5 μm), and performed in elution buffer that consisted of MeOH and H2O:CH3COOH (98.5:1.5 v/v) with 1000 μL min−1. Based on the calibration curve and the peak area of the standard compounds, phenylpropanoid content was calculated in each sample.

All results in this study, including quantification and analysis of gene expression and phenylpropanoid compound content, are expressed as the mean ± SD of three independent replicates. The Statistical Analysis System software (SAS version 9.2, SAS Institute Inc., Cary, NC, USA, 2009) was used to analyze the differences between the treatments.

3.1. Effect of NaCl Treatment on the Growth of Wheat Sprouts

3.2. Effect of NaCl on Genes Expression of Phenylpropanoid Biosynthetic Pathway

This research was supported by grants from the Research Program of KAERI, Republic of Korea. 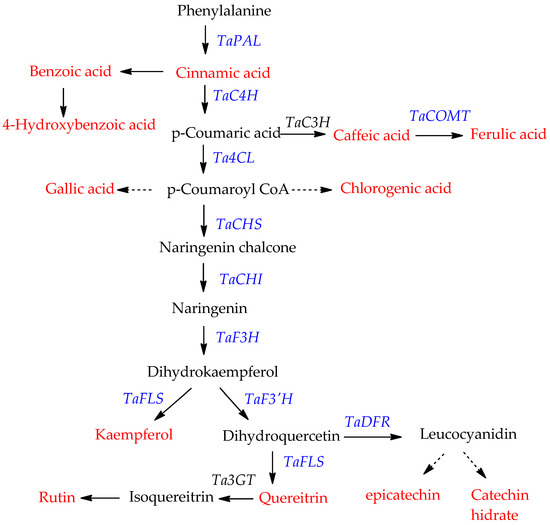 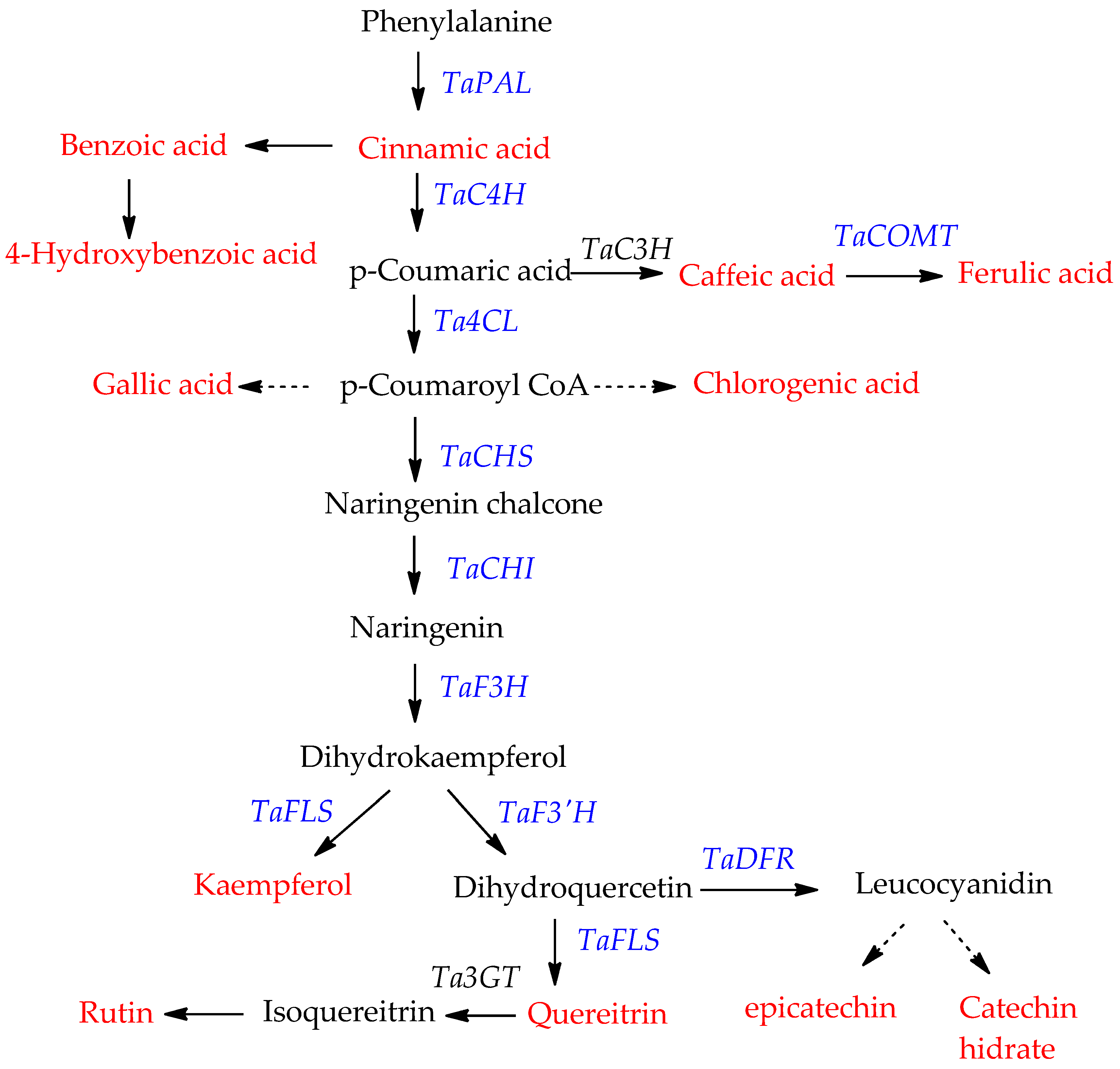 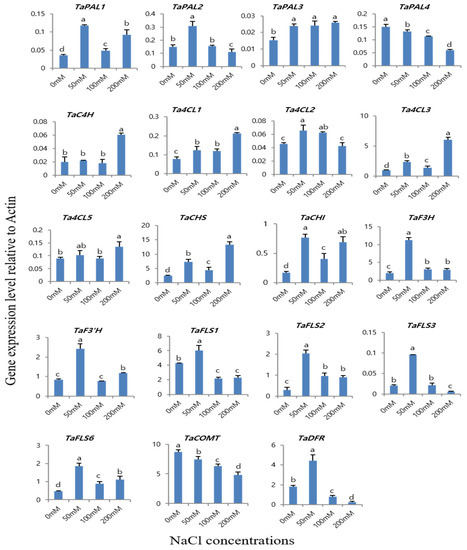 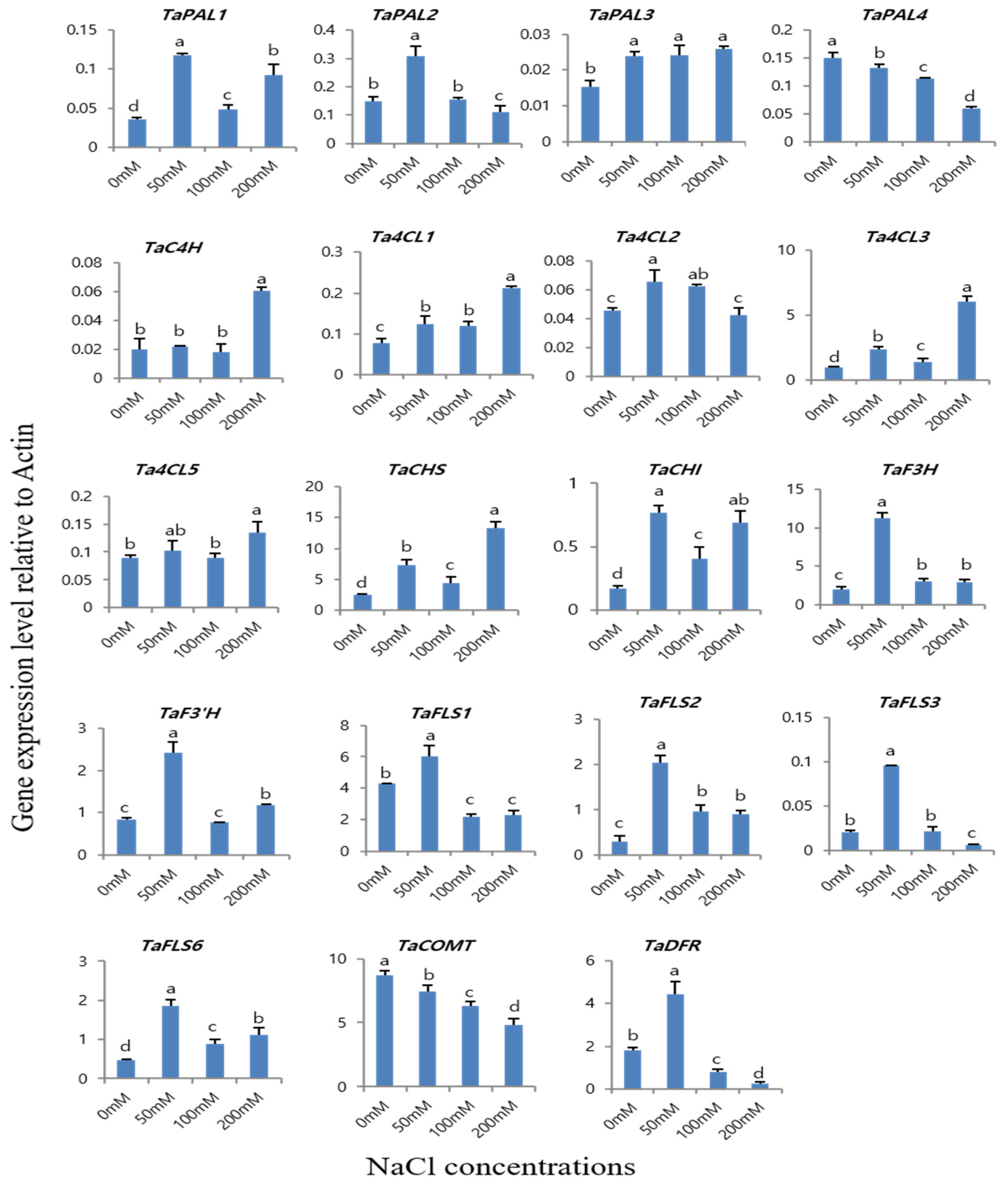 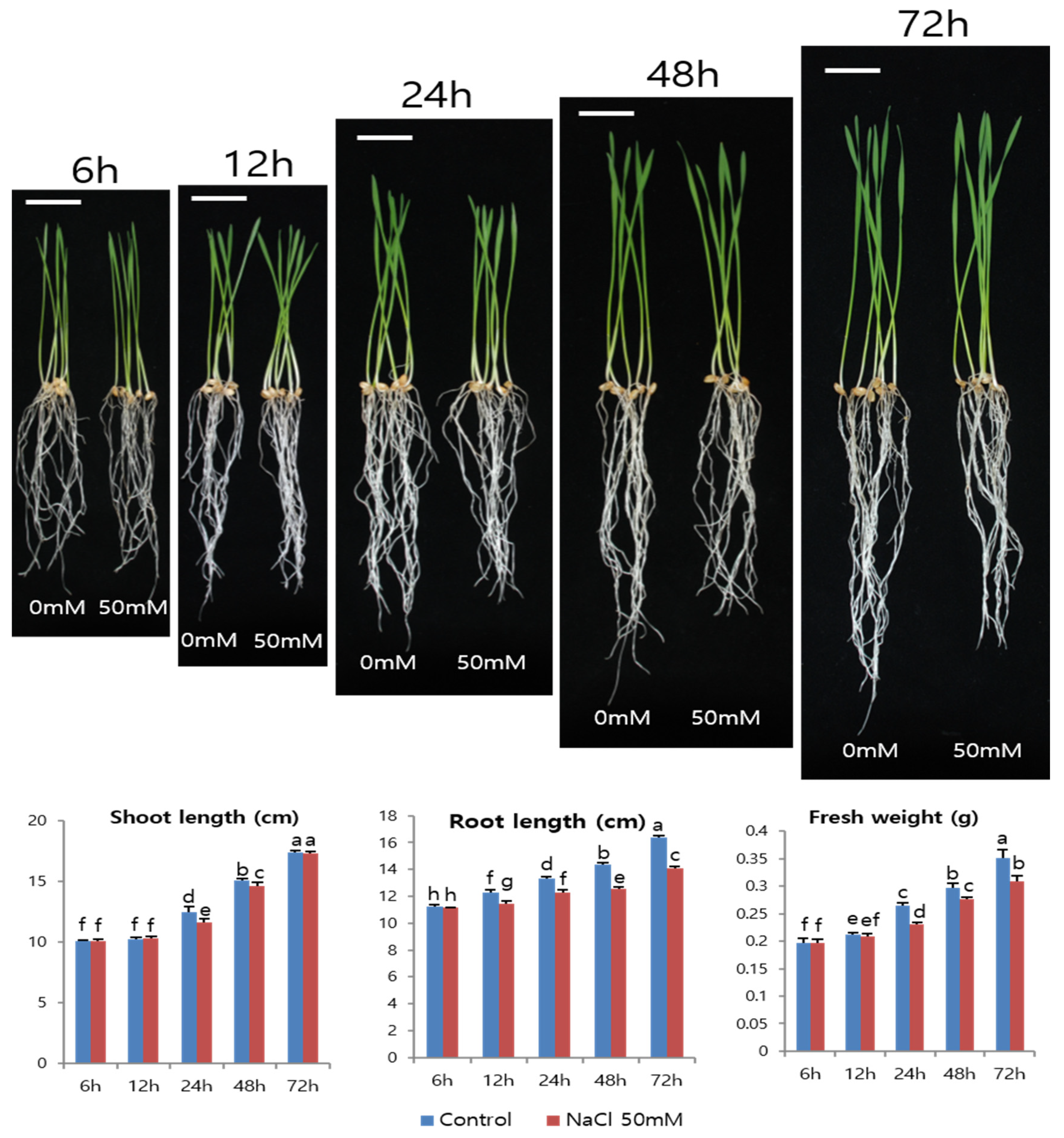 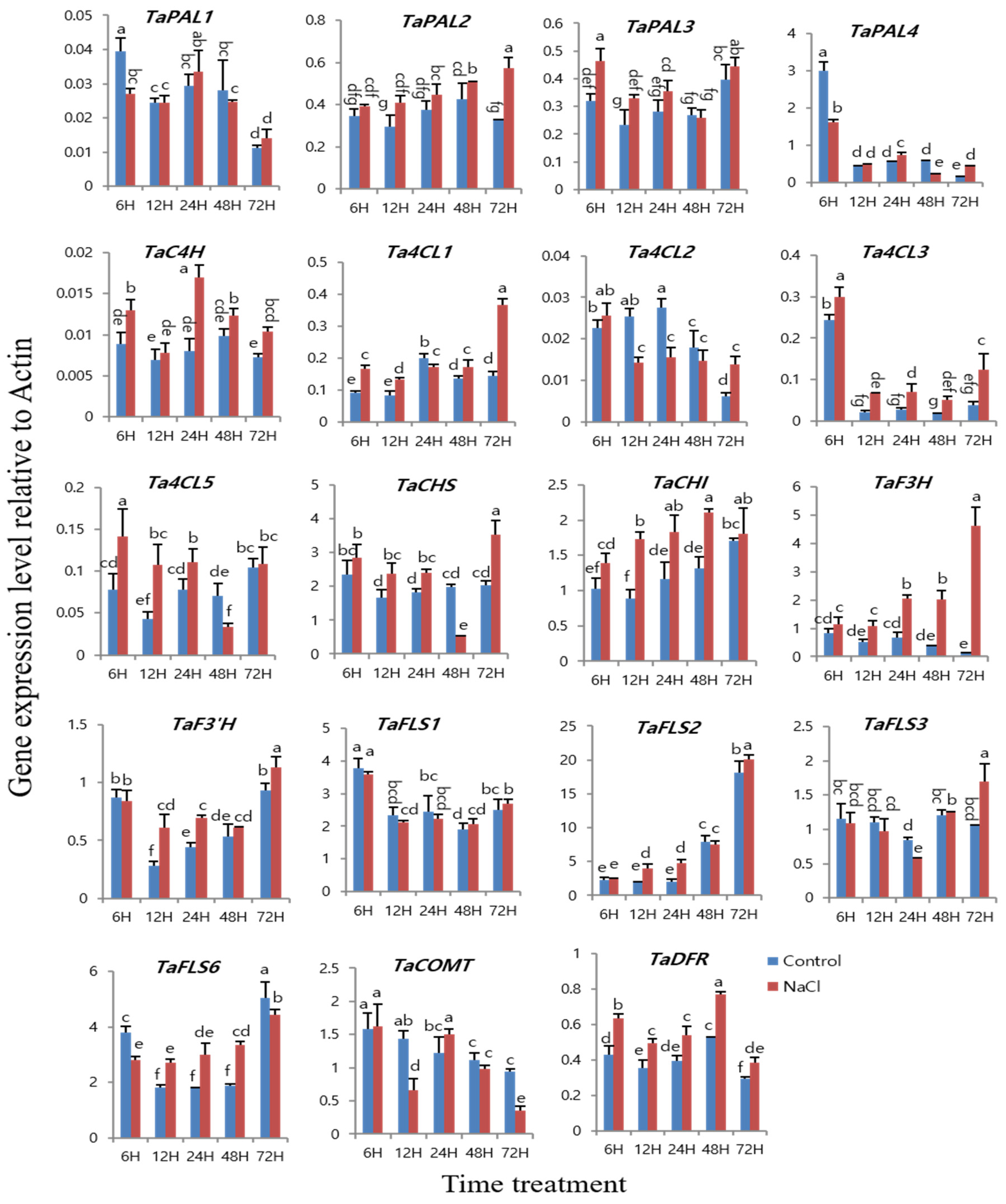