Immediate yield loss information is required to trigger crop insurance payouts, which are important to secure agricultural income stability for millions of smallholder farmers. Techniques for monitoring crop growth in real-time and at 5 km spatial resolution may also aid in designing price interventions or storage strategies for domestic production. In India, the current government-backed PMFBY (Pradhan Mantri Fasal Bima Yojana) insurance scheme is seeking such technologies to enable cost-efficient insurance premiums for Indian farmers. In this study, we used the Decision Support System for Agrotechnology Transfer (DSSAT) to estimate yield and yield anomalies at 5 km spatial resolution for Kharif rice (Oryza sativa L.) over India between 2001 and 2017. We calibrated the model using publicly available data: namely, gridded weather data, nutrient applications, sowing dates, crop mask, irrigation information, and genetic coefficients of staple varieties. The model performance over the model calibration years (2001–2015) was exceptionally good, with 13 of 15 years achieving more than 0.7 correlation coefficient (r), and more than half of the years with above 0.75 correlation with observed yields. Around 52% (67%) of the districts obtained a relative Root Mean Square Error (rRMSE) of less than 20% (25%) after calibration in the major rice-growing districts (>25% area under cultivation). An out-of-sample validation of the calibrated model in Kharif seasons 2016 and 2017 resulted in differences between state-wise observed and simulated yield anomalies from –16% to 20%. Overall, the good ability of the model in the simulations of rice yield indicates that the model is applicable in selected states of India, and its outputs are useful as a yield loss assessment index for the crop insurance scheme PMFBY. View Full-Text
Keywords: crop insurance; PMFBY; rice; crop modeling; DSSAT; yield anomalies crop insurance; PMFBY; rice; crop modeling; DSSAT; yield anomalies
►▼ Show Figures 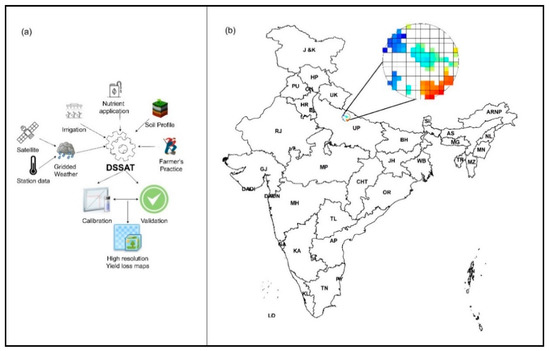