Advances in Genomic Interventions for Wheat Biofortification: A Review

Conventional tillage practices have been regarded as the major reason for the loss of fertile topsoil in the sloping agricultural lands of the middle hills of Nepal. Reports on the effects of no-till and mulch on soil and corn yield in these regions are scarce, although these farming practices have been recommended to reduce soil erosion and increase crop yields. To assess the impacts of tillage (with +T, without −T) and mulch (with +M, without −M) on soil and soil nutrient losses, and corn yield, we conducted an experiment with five treatments: −T+M, −T−M, +T+M, +T−M, and bare fallow (BF), replicated four times each in an unbalanced complete random block design in Salyan district of Nepal. The results showed the presence of corn and no-till significantly lowered the soil losses. Losses of soil organic matter (SOM) and total nitrogen were also significantly reduced by the presence of corn, no-till, and mulch. However, no effects of mulch on soil losses, and no effects of tillage, mulch and corn on soil phosphorus losses were observed. Soil loss was found to be significantly and positively correlated with total seasonal rainfall, monsoon being the most severe season for soil erosion. While no-till and mulch did not affect corn height, cob height, and stover yield, no-till significantly increased the corn yield by 0.52 Mg ha−1 compared to conventional till. We confirm the synergistic interaction of mulch with tillage to reduce the losses of SOM and total nitrogen, and effectiveness of no-till to reduce the soil losses and increase the corn yield in the middle hills of Nepal. As this study is based on the results of two year’s data, long-term studies are required to identify the long-term impacts of no-till and mulch on soil losses and corn yield across the country. View Full-Text
Keywords: soil loss; soil organic matter; nutrient losses; sloping land soil loss; soil organic matter; nutrient losses; sloping land
►▼ Show Figures 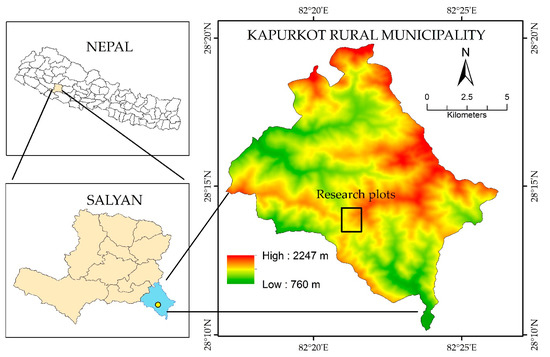