Effects of Exogenous Application of Osmotic Adjustment Substances on Growth, Pigment Concentration, and Physiological Parameters of Dracaena sanderiana Sander under Different Levels of Salinity
Next Article in Special Issue

Advances in Genomic Interventions for Wheat Biofortification: A Review

The incidence of many malnutrition-related diseases among the populations of developing countries is closely related to low dietary zinc (Zn) intakes. This study evaluated the potential of agronomic biofortification of lettuce genotypes with Zn in different soils. We evaluated the ability to biofortify three lettuce genotypes (‘Grand Rapids’, ‘Regina de Verão’, and ‘Delícia’) in two soils (Red-Yellow Latosol and Dystroferric Red Latosol) using five doses of Zn (0, 5, 10, 20, and 30 mg kg−1). At 55 days after sowing, the plants were harvested. There was an interaction among the soils, genotypes, and Zn doses. Regardless of the soil and genotype, the increase in Zn supply promoted a linear increase in shoot Zn concentration. However, shoot and root dry matter yields were differentially affected by Zn supply according to the genotype and soil type. Overall, the Red-Yellow Latosol provided a higher shoot Zn concentration but also caused greater growth damage, especially in ‘Regina de Verão’ and ‘Delícia’. ‘Grand Rapids’ was biofortified the most in Red-Yellow Latosol. View Full-Text
Keywords: Lactuca sativa; nutritional value; cultivars; micronutrient; food safety Lactuca sativa; nutritional value; cultivars; micronutrient; food safety
►▼ Show Figures 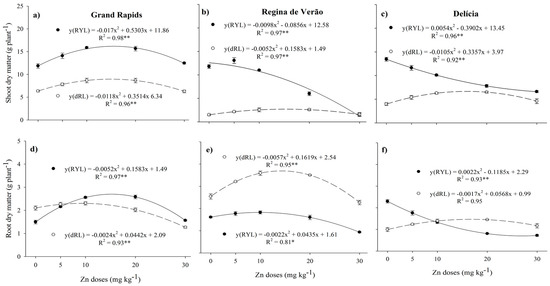