Imidazole, a New Tunable Reagent for Producing Nanocellulose, Part I: Xylan-Coated CNCs and CNFs
Next Article in Special Issue

Effects of Lateral and Terminal Chains of X-Shaped Bolapolyphiles with Oligo(phenylene ethynylene) Cores on Self-Assembly Behaviour. Part 1: Transition between Amphiphilic and Polyphilic Self-Assembly in the Bulk

Polyphilic self-assembly leads to compartmentalization of space and development of complex structures in soft matter on different length scales, reaching from the morphologies of block copolymers to the liquid crystalline (LC) phases of small molecules. Whereas block copolymers are known to form membranes and interact with phospholipid bilayers, liquid crystals have been less investigated in this respect. Here, series of bolapolyphilic X-shaped molecules were synthesized and investigated with respect to the effect of molecular structural parameters on the formation of LC phases (part 1), and on domain formation in phospholipid bilayer membranes (part 2). The investigated bolapolyphiles are based on a rod-like π-conjugated oligo(phenylene ethynylene) (OPE) core with two glycerol groups being either directly attached or separated by additional ethylene oxide (EO) units to both ends. The X-shape is provided by two lateral alkyl chains attached at opposite sides of the OPE core, being either linear, branched, or semiperfluorinated. In this report, the focus is on the transition from polyphilic (triphilic or tetraphilic) to binary amphiphilic self-assembly. Polyphilic self-assembly, i.e., segregation of all three or four incorporated units into separate nano-compartments, leads to the formation of hexagonal columnar LC phases, representing triangular honeycombs. A continuous transition from the well-defined triangular honeycomb structures to simple hexagonal columnar phases, dominated by the arrangement of polar columns on a hexagonal lattice in a mixed continuum formed by the lipophilic chains and the OPE rods, i.e., to amphiphilic self-assembly, was observed by reducing the length and volume of the lateral alkyl chains. A similar transition was found upon increasing the length of the EO units involved in the polar groups. If the lateral alkyl chains are enlarged or replaced by semiperfluorinated chains, then the segregation of lateral chains and rod-like cores is retained, even for enlarged polar groups, i.e., the transition from polyphilic to amphiphilic self-assembly is suppressed. View Full-Text
Keywords: self-assembly; amphiphiles; polyphiles; bolaamphiphiles; liquid crystals; honeycombs; fluorophobic effect; block molecules; oligo(phenylene ethynylene); oligo(ethylene oxide) self-assembly; amphiphiles; polyphiles; bolaamphiphiles; liquid crystals; honeycombs; fluorophobic effect; block molecules; oligo(phenylene ethynylene); oligo(ethylene oxide)
►▼ Show Figures 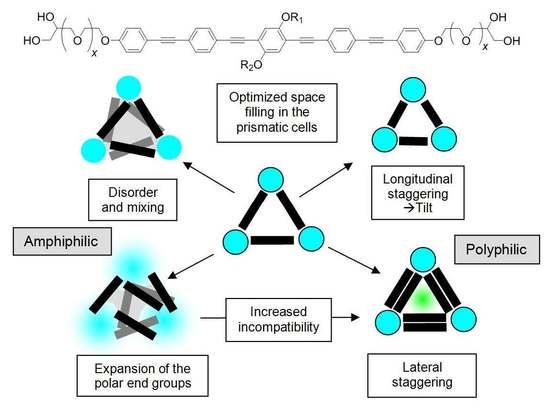