Physical and Mechanical Evaluation of Five Suture Materials on Three Knot Configurations: An in Vitro Study

Sutures are used in surgery for a number reasons. These include the reapproximation of tissues separated as a result of surgery or trauma, enhancement of primary healing and hemorrhage control [1]. The most commonly used materials for this purpose are sutures [2].
Sutures play a key role in ligating severed ends of vessels and approximating tissues. The knot is the weakest part of a suture. There are many factors involved in the overall integrity of a knot, such as tension, diameter of the suture, kind of knot, number of throws and length of the cut ends [3].
In periodontal surgery, the appropriate choice of suturing technique, surgical needle, thread diameter, thread type, as well as an adequate surgical knot for each thread material chosen, are all crucial to achieve optimal healing [4]. In the oral cavity, suturing differs from other areas of the body due to the type of tissues involved, the permanent presence of saliva, high tissue vascularization, speech-related functions, mastication, and swallowing. Sutures demand a number of specific characteristics and properties, such as dimensional stability, lack of memory, good tensile strength, knot security, and enough flexibility to prevent damage to the oral mucosa [5].
A range of sutures are available that are classified by several criteria: 1. Composition—natural and synthetic; 2. structure—monofilament and multifilament; and 3. spontaneous degradation—absorbable and non-absorbable [2].
One of the advantages of absorbable sutures is that they generally do not need to be removed. However, those materials are associated with different tissue responses as a result of their degradation by hydrolysis, enzymatic digestion or phagocytosis. The rate or this degradation depends on the pH and the temperature of the tissues surrounding the suture [2].
Periodontists select the type of suture material according to several criteria that include absorbability, handling, strength, and the structure of the suture. Nonetheless, research has shown that monofilament sutures induce less tissue reaction than do multifilament sutures [2,6,7].
Monofilament sutures have lower knot tie-down resistance, lower tissue drag and less risk of infection compared with braided suture materials. There is less risk of colonization by microorganisms and they are easier to tie. However, their cut ends could irritate mucosa and cause ulceration [2].
Multifilament sutures are easy to handle and tie because they have lower bending stiffness and are easy to form a stable knot. However, their braided structure often facilitates the accumulation of food debris or bacteria [2].
Among monofilament sutures, polytetrafluoroethylene (PTFE) has low surface friction, chemical inertness, biocompatibility, resistance to in vivo degradation, minimal memory and, consequently, superior handling characteristics. However, the low static coefficient of friction and chemical inertness make the knot less secure [8].
Of the different suture materials, polyglycolic acid (PGA) has a lower incidence of infection in contaminated tissues and exhibits no residual tensile strength [9]. As a result, the PGA is stronger than silk, but its strength lessens significantly after a period of time in the oral tissues. Low-cycle tensile fatigue testing showed that breaking strengths of PGA sutures dropped appreciably by cyclic loading and degradation, with a significant decrease in tensile strength, after a period of five to seven days in the oral tissues [6].
An in-depth understanding of the physical and mechanical properties of suture materials is crucial to dental practice. However, there is incomplete and inconsistent information regarding tissue reactions to different suture materials, above all in humans [7]. At present, there is no suture that meets all the requirements of an ideal material [10]. Hence, the aims of the present study are to evaluate and compare the mechanical properties of five suture materials and three knot configurations when exposed to physical conditions.

This in vitro study was designed in 2010 and conducted between March 2011 and December 2012. The protocol of the study (PER-ELM-2011-01-CM) was evaluated by the Scientific Committee of the Universitat Internacional de Catalunya, Barcelona, on March 30th 2011, who certified the research protocol was adequate to be developed.
Five suture materials were used in order to assess their properties in three different knot configurations (Table 1).
Five 5-0 (silk, polyamide 6/66 (PV), polyglycolic acid (AP7), glycolide-e-caprolactone copolymer (GC7) and polytetrafluoroethylene (PTFE)) suture materials were used in this study. Three were monofilament and two multifilament. Each group contained ten samples. The entire study was carried out by a single examiner.

Mechanical properties (failure load, elongation, knot slippage or knot breakage) were measured using a Quasar 5 Universal Testing Machine (UTM) (Galdabini 1890, V925. 2007, Cardano Al Campo, Italy).
Elongation was measured as the displacement that a suture can experience before breaking in tensile testing. The failure load was calculated as the maximum tension the material can withstand without tearing. In addition, knot slippage was defined as a knot that slips easily along the cord or line around which it is made, and knot breakage as the point at which material breaks under loading.
To conduct the analysis, sutures were placed on two hooks at opposite ends of the UTM and tested at 0.25 N/mm at an established mandible separation speed of 50 mm/min (Figure 2a).

Sutures underwent different physical environments. Samples were independently subjected either to pH changes or thermal cycle fluctuations (Figure 2b,c).
Samples tested for pH conditions were immersed in three different flasks at pH = 4, pH = 7 and pH = 9 concentrations. Physical properties were evaluated within 7 and 14 days.
Thermal cycle fluctuations were tested in a Universal Thermal Cycling Testing Machine (UTCTM) (Universitat Internacional de Catalunya, Barcelona, Spain). Sutures were immersed in two water tanks for 30 s/tank at 5 and 55 °C, respectively to simulate oral conditions and evaluate suture degradation. Sutures were submitted to 182 and 364 cycles, which simulates 1 and 2 weeks clinically, based on an estimate of 10,000 cycles/year for biomaterials in the oral environment [11].
After assessment of their physical properties, the mechanical properties of the sutures were evaluated as described above.

The statistical analysis was performed using a standardized sample of 10 sutures per group. The effect of the different physical conditions on the mechanical properties of suture materials was evaluated, as well as the impact of using three different knot configurations on suture materials. The results were analyzed using a multifactorial ANOVA (Table S1), chi-Square test and descriptive analysis with a significance level of 0.05 and 95% confidence intervals.

The type of physical condition to which materials were exposed did not affect to any of the parameters that were evaluated in this study. Therefore, physical conditions of pH and temperature seemed not to have an impact on the integrity or failure load of the materials. (p = 0.404) (Table 2).

3.2. Influence of the Knot Configuration

Among the five suture materials; AP7 was found to be the most susceptible to knot breakage, followed by PV, Silk and GC7 with few differences between them. Finally, PTFE showed the lowest results in knot breakage but with a high incidence of knot slippage in all the configurations studied (p < 0.001) (Figure 6).

This in vitro study was designed to evaluate the physical and mechanical properties of 5 suture materials on three knot configurations when exposed to a variety of physical conditions, of which there is scarce information in the literature.
A single examiner carried out the entire study to minimize variability. The methodology used for this research was established according to previous studies. The Universal Testing Machine was configured based on parameters set by Kim et al. [2]. Moreover, pH solutions were used in accordance with Chu et al. [3] who observed statistically significant differences in the degradation of various suture materials. To date, no study has evaluated the effect of hydration at different temperatures on sutures. However, those criteria have been used as measurement parameters in restorative dentistry, with an increase of microleakage in resin biomaterials [11].
Suture materials used in this study were absorbable or non-absorbable, made of natural or synthetic fibers, and monofilament or multifilament in structure.
Three configurations of three-throw surgeon’s knots were used in this study: knot A with a three-throw forward—one forward and one reverse; knot B with a two-throw forward—one reverse and one forward; and knot C with a one-throw forward two forward and one reverse. The surgeon’s knot was used in this study because it is the most widely used type in periodontal surgery. Moreover, this kind of knot has been previously employed in various studies conducted by Selvig et al. [12]. Lekness et al. [7] and Yaltirik et al. [13]. Suture end length was established at 3 mm according to Muffly et al. [14]. Their research demonstrated that 3 mm cut end offers enough length to avoid knot slippage.
Our study demonstrates that suture resistance depends on the type of material and the knot configuration used. Moreover, its physical exposure to biodegradable agents has no effect on suture material integrity or knot resistance. However, other studies evaluating the effects of different media on resorbable suture materials have demonstrated otherwise. A recent report by Fong and coworkers [15] demonstrated that flax fibers sutures that underwent wet conditions exhibited fiber debonding leading to fiber pullout, while dry flax fibers exhibited brittle fracture. However, both wet and dry knotted sutures failed at the entrance of the knot.
Previous studies have reported that absorbable materials have higher resistance to tension while non-absorbable ones show lower resistance. Those results are in agreement with Moser et al. [6] in which PGA exhibited the highest results in natural conditions as well as after being immersed in Ringer’s solution from 5 to 7 days. However, that study found a significant decrease in resistance of PGA after remaining from 5 to 7 days in the mouth. In contrast to these results, Lim and coworkers [16] studied the biomechanical properties of a nonabsorbable braided suture, Supramid, with three different suture techniques. The authors concluded that the six-strand single-loop suture technique, pulls out, rather than breaking, at sufficiently high loads and let tissues transfer large forces along the suture. This may suggest that suturing technique influences the degree of load supported.
Some studies have indicated that pH levels may have a greater influence on the performance of absorbable sutures than on non-absorbable ones. Both acidic and alkaline environments are able to accelerate the degradation of absorbable sutures. Among the non-absorbable sutures, silk appears to be the most susceptible to various pH conditions [17]. Silk is the most widely used material despite its suboptimal mechanical properties. This might be due to its easy handling, reliability and strength. In contrast, some studies have concluded that PGA sutures obtained the best strength in an acidic pH condition [18].

The authors thank Emilio Canals and Ancladén (Barcelona, Spain) for donating the suture materials used in this research. 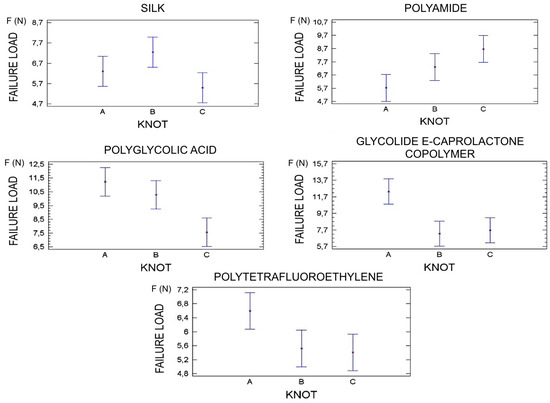 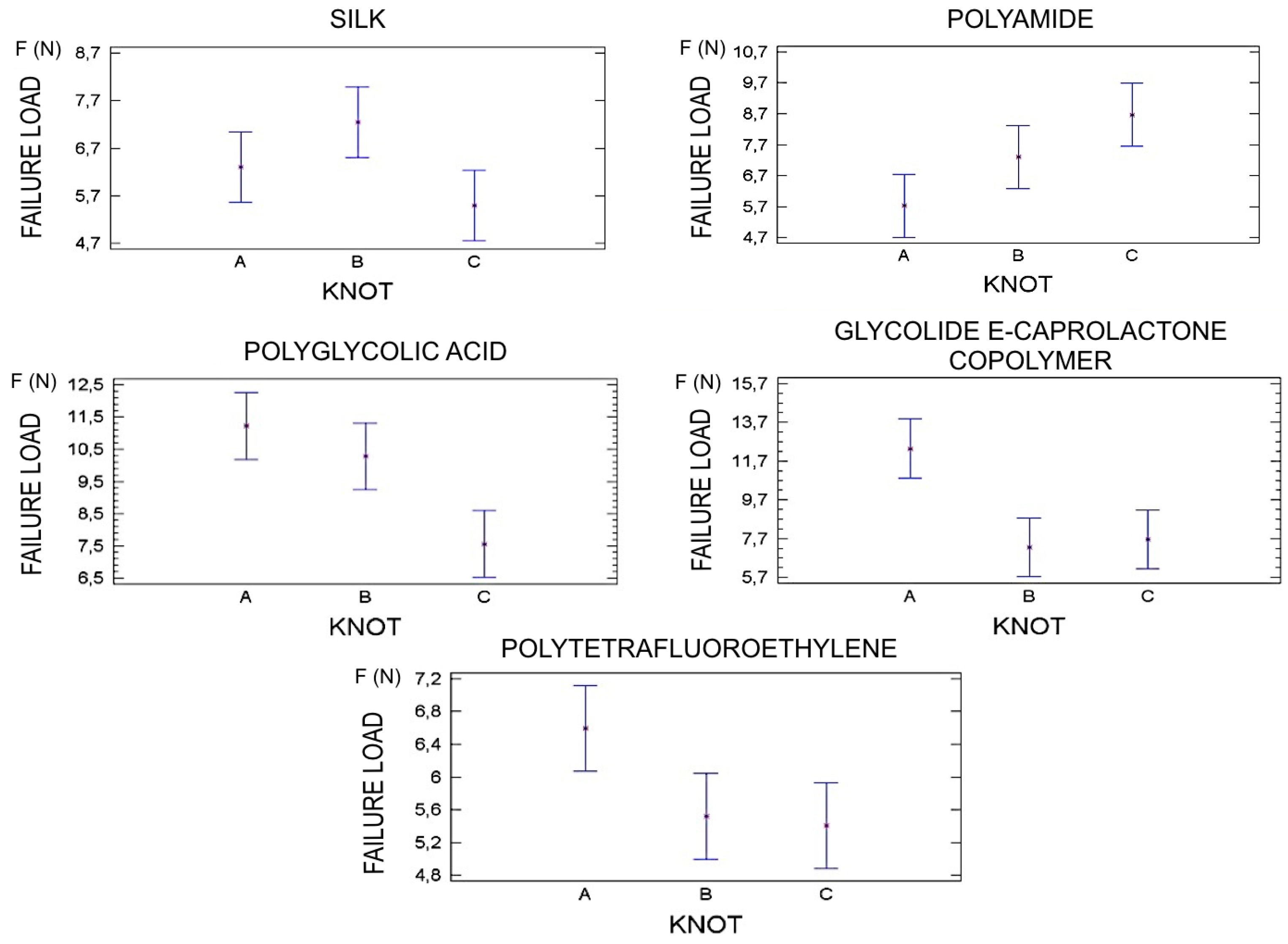